Launched in 2005, Escape Pod is the original genre podcast. Escape Pod has  been nominated for the Hugo and the Parsec award, and the podcast is part of the Escape Artists family (which includes Podcastle and Psuedopod, among other), which means every piece of fiction they publish is also produced as an audio podcast. There are now so many episodes of Escape Pod, that the staff put together a guide for new listeners!


Over the last fifteen years, Escape Pod has hosted flash fiction contests,  published the Mothership Zeta quarterly e-zine, and hosted the Artemis Rising month-long celebration of genre fiction written by women.   To celebrate their fifteenth year, Escape Pod is publishing an anthology of works by authors whose short fiction has appears in the podcast, Escape Pod: The Science Fiction Anthology will be available later this year.


Co-Editors S.B. Divya and Mur Lafferty were kind enough to chat with me about how they got involved with Escape Pod,  what they enjoy most about being involved with producing audio fiction, the 'zine's 15th anniversary anthology, and more!

S.B. Divya's short fiction collection Contingency Plans For the Apocalypse and Other Situations, is out now from Hachette India, and her debut novel Machinehood will be out from Saga Press next year.  Her short fiction has appeared in Uncanny, Tor.com, Apex, Lightspeed,and Daily Science Fiction, among other publications. Her novella Runtime was a Nebula finalist.  You can learn more about Divya at her website, eff-words.com.

Mur Lafferty has been involved with podcasting for longer than she'd like to admit. She was one of the founding editors of Pseudopod, an early staff member of Escape Pod, and the founder/editor of Mothership Zeta, Escape Artist's quarterly e-zine. Her podcast Ditch Diggers won the Hugo for best Fancast, and she has won the Astounding Award for best new writer. Her novels include Solo: A Star Wars Story,  Six Wakes, and The Shambling Guide to New York City. Learn more about Mur and her work at her website, murverse.com.

NOAF: What is your role at Escape Pod? How did you come to be involved with Escape Pod?

Mur Lafferty: I've been involved with EP since the beginning, helping Serah Eley out with promotion, narration, and eventually taking over as Editor a few years ago. (10? Sheesh. Time flies.) I left to reduce my number of projects so I could go to grad school. A few years later I started another project with Escape Artists that didn’t really work out, but when we shuttered that, Norm Sherman was leaving Escape Pod and Divya was moving up from Asst. Editor to Editor. She wanted a partner, so I was honored to return to the show again.

S.B. Divya: I joined Escape Pod in 2015 as an associate editor (AKA "slush reader") at the invitation of Rachel K. Jones. We were both members of the Codex Writers Group at the time, and had come to love each other's stories. About a year later, Nathan Lee had to step back from being Assistant Editor, and both he and Norm Sherman (editor at the time) thought I'd be a good fit for the position so I gave it a shot. I enjoyed learning more about the editorial process, and eventually, when Norm needed to move on, I became one of the editors. Having to juggle a day job and parenting, I really wanted a partner for this role and was overjoyed when Mur agreed to be my co-editor. 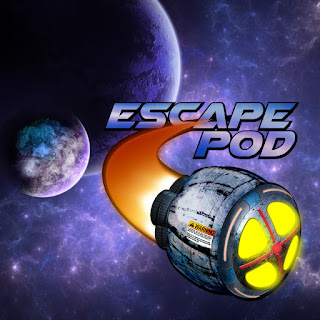 NOAF: What’s been your favorite thing about being involved with Escape Pod?

S.B.D.: Like Mur, I love discovering new authors, and I enjoy thinking about the right narrator for each story and trying to find that best match. I'm also doing my best to be a gatekeeper for more voices in science fiction that haven't been heard in the past. I think it's important to have diversity among editors as well as authors, and sometimes that means seeking out authors who might not think of Escape Pod as a place to submit their fiction. Having the ability to solicit and share those stories with our audience brings me a sense of satisfaction.

ML: We always have to think of how the show will sound, which makes it really hard to turn down stories that are otherwise amazing but wouldn't work with audio, As for the workload, we are lucky to have a dedicated team of narrators, producers, and hosts. We try to work several weeks ahead of time to make sure we can iron out any problems before we post the episode.

NOAF: Escape Pod has been publishing short fiction for fifteen years. How has Escape Pod evolved over the years? What directions do you see Escape Pod going in the future?

ML: Since starting in 2005, we have expanded our team, become a SFWA recognized pro-paying market, changed editors a few times, and began buying electronic print rights so we can post the stories in full on our site to increase accessibility. We have become part of a larger group of podcast magazines at Escape Artists as well (including Pseudopod, Cast of Wonders, and Podcastle.) In the early days we published a lot of horror and fantasy stories, especially around awards season, but now that we have more shows dedicated to their own genres, Escape Pod focuses entirely on science fiction. In the future? It's hard to determine that in today's climate, but internally we are moving toward paying everyone on our staff (slush readers are next). Externally, this summer we are taking a page from pre-streaming television and featuring "re-runs" all summer, showcasing some favorite episodes of the past with new, more thorough hosting endcaps by one of our hosts (and co-publisher), Alasdair Stuart. 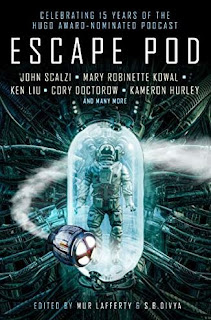 NOAF: To celebrate your 15th anniversary, you are publishing Escape Pod: The Science Fiction Anthology, which will be available in October of this year. Fifteen years of fiction, how in the world were you able to decide which stories to include in the anthology?


ML: We looked at authors who have been part of the show in the past fifteen years, either choosing a reprint we've published or asking for something new. We tried to choose a representative sampling with a focus on those who've continued to grow their science fiction careers. The final list was a product of our choices, the publisher's preferences, who had time for new stories, and who had the rights for reprints.

NOAF: What will winning the Hugo for best Semiprozine mean to you?

ML: It's taken over a decade to have podcasting respected - every few years a mainstream outlet expresses amazement that one can serialize audio or release fiction through this new platform called podcasting. Our two Hugo nominations have helped greatly to bringing science fiction's eye to podcasting, and a win would further cement our medium as a publishing model that's not going anywhere.