Amorphous aliens, vibrant dragons, talking bears, and the horrors of uniformity make their mark on Earth to deliver an original story. 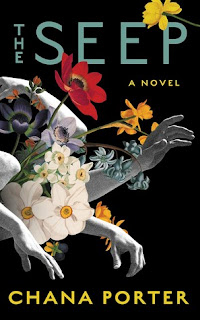 Aliens seem to have made things easy for people on Earth in The Seep. Tensions are no longer like incendiary tinderboxes, but are instead like waterlogged firearms. Traumatic memories are no longer sharp wounds. Happiness isn't hard to find. The novel asks the question, would the world be a better place if we didn’t experience pain or strenuousness while navigating life? In our times, when the pain is so severe, the easy answer would be yes. But The Seep says otherwise, and strangely, the best way it gets that point across is when the novel stumbles and makes mistakes.

The Seep chronicles a world in which an amorphous alien race called The Seep takes over the world. But not in a typical dictatorial, dystopic fashion. Instead, The Seep…seeps into a person in various forms, offering them a transformation that could be physical or mental or both. All the flaws that a person finds in their physique can be rectified. Stressors and fears are calmed.  Memories that once brought painful jolts become a lulling, pacifying fog. But in its place is a society that is at times a uniform, sterile bore. For all the profundity on society The Seep doles out, however, it has an equal dose of humor. The writing’s both simple and animated. The book is novella-sized in word count, but has a novel-sized plot, moving at a zippy pace, sometimes to its benefit, sometimes to its detriment.

The novel focuses on the relationship between two characters: Deeba, and her girlfriend Trina—the protagonist. They are almost a picture perfect couple. Trina’s only objections with the world don’t lie with her girlfriend, but with The Seep—an alien race that believes all people are “one” regardless of gender or race. The problem is that Trina changed her gender, because she wanted to be a specific type of person, with all the minute changes it entails, and The Seep’s anodyne belief of complete uniformity undermines and trivializes it. To top it all off, her girlfriend, Deeba, redoes her life, starting again as a baby to strip herself of all her traumatic memories.  How is Trina supposed to grieve, and experience authentic, uninhibited feelings when she lives in a society where non-painful emotions are the only acceptable one? To say that this makes her frustrated is an understatement. And that frustration imbues the story with a propulsive fire.

It bears mentioning that this book is quite absurd. Not in a grotesque or edgy way—it toes the line between humor and impropriety. But if images like a dragon making out with a person while high on an aphrodisiac turns you off, beware! The story isn’t a far-reaching, save the world type of deal, either. It follows Trina dealing with the end of her relationship, through a journey of self-discovery and settled scores, as she struggles to decide whether relinquishing her pain and history in lieu of uniformity is worth it.

The story does lay out its answer to that question pretty thick. But the answer is made even more clear by studying the book’s flaws. The most exciting parts of the book happen when Trina is grappling with things that upend her beliefs, when she hits brick walls in her pursuits, or when she’s at the brink of failure. Those moments are aplenty, and like most conflict-centric parts of stories, are predictably the best parts of the book. In other instances, Trina speeds through her journey—jumping over potential threats like they’re narrow cracks on the road. And interactions with a few supporting characters (the 200-ish page count deprives many of the characters of fully formed development) are skirted over, even when there are opportunities for conflict and discussion. These moments are pleasant, but not gratifying. And I think that answers the book’s question: breezy pleasantries are serviceable, but it’s the feeling and memories of surmounting major hurdles, despite the stumbles you have along the way that creates the best experiences. Pain is essential to the greatest satisfaction.

This is a great debut. Through original humor, digestible but hard-hitting and necessary philosophical discussions, and a climax that uses absurdity to its very best, Chana Porter has concocted something special that gets its message across in more ways than one. In a world where many ill-informed people are trying to make us all one by subsuming us in a monoculture to avoid conflict, it’s important to realize that that monoculture deprives us of flavor, history and vibrancy.

Bonuses: 1+ The humor sneaks up on you and works organically in tandem with the drama.
+1  For having the more developed characters built on and described cleverly.


POSTED BY: Sean Dowie - Screenwriter, stand-up comedian, lover of all books that make him nod his head and say, "Neat!