Dragons flying through the sky during the Cold War just scratches the surface of this novel's mind-blowing oddities. 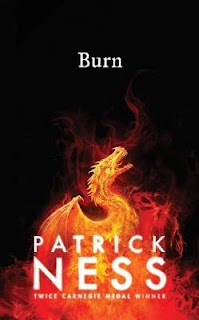 Imagine a fire that’s spread throughout an entire town. The conflagration is hellbent on continuing, no matter what heroic attempts are made. People are scrambling, buildings are charred abominations, the sky is covered in smoke. It’s a mess--not so different from this book. But there is warmth in the fire, and beauty in the sparks, like one last firework show during doomsday. Despite how overreaching the fire (or the book) is, there is a sort of beauty to its scorch. It’s in no way ideal, but with the right mindset and taste for that type of sight, it’s appreciable.

It’s been a while since I’ve seen a book as ambitious as Burn. With too many game-changing twists to count, a plot that moves at light speed, and enough story beats to fill a dictionary, it’s certainly something I won’t forget.

I’m going to be very careful in synopsizing the story without spoilers, because the fun of this book mainly lies in its unpredictability. It is 1957, and the Cold War rages on, not unlike our past--but this book’s world has a significant fantastical element that’s not in our history: there are dragons. Humans and dragons are generally distant, although there is a human cult which worships dragons as if they’re flaming breath is the light at the end of the tunnel. But generally, there is a non-violent remove between the species, in which they go about their lives independent from each other. That is, until Sarah Dewhurst, a seemingly average teenage girl finds out her father has ordered a dragon to help work at his farm. And this dragon tells her that she is part of an earth-shattering prophecy. This springboards an exploration of magic, superhuman assassins, and hints that the peace between the humans and dragons might be at its end.

Patrick Ness is a fascinating author, particularly because he’s not beholden to tropes and isn’t afraid to get a little inventive, sometimes at the expense of believability and sturdy story structures. He doesn’t disappoint on that front here, but I feel the elasticity of his believability and construction of his plot finally broke and collapsed in Burn. Not only does the book’s plot move at such a fast pace in its second half, that it’s bereft of sufficient worldbuilding and opportunity to get your bearings, but looking back, it’s hard to think of a way for even a mind like Ness' to make some of the story deliver with even twice the word count.

Despite the lightning-speed plot developments, Ness once again showcases his great characterizations, which is doubly impressive here, as a lesser author would lose the human element in this maelstrom of ideas. Even though some of the fantastical ideas are hand-waved for the expedience of plot, I never felt like I lost a handle on how these characters were feeling, nor did I feel their actions contradicted their personalities. Whether it’s the blooming and then disintegration of a romance, philosophizing about the vicissitudes of the universe, or rageful spats, there was never a tinge of emotional inauthenticity.

The book switches between about ten perspectives, but is always readable. Never once did I wonder where the character was oriented in the story, despite the many point of views. Having a single original voice in a story is one thing, but Burn manages to infuse all its perspectives with flavor. If you somehow do get lost upon reading the story, you can easily locate which character you’re following based on how they’re written.

Burn won’t be the novel that Patrick Ness is remembered for. He’s written novels that don’t founder under their weight and imbue more emotional satisfaction. But this is ambition that’s rarely seen in a novel of relatively scant word count. Reaching for the stars by itself is impossible. But taking flight high on a dragon, with a person as ingenious as Ness at the helm, comes close enough to admire its effort.

Bonuses: +1 For setting up a heartfelt romance, then stabbing you in the heart, bandaging the wound, and repeating the process without annoyances.
+1 For blowing my mind with engaging, insane plot twists.

Negatives: -1 For making me scratch my head with less engaging, insane plot twists

POSTED BY: Sean Dowie - Screenwriter, stand-up comedian, lover of all books that make him nod his head and say, "Neat!
Posted by Sean D at 12:00:00 AM