The Relentless Moon is hopeful science fiction. It is a novel about striving towards excellence and truly building a better tomorrow even in the face of a devastating future. 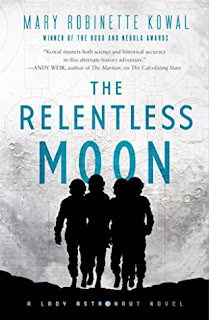 The first two Lady Astronaut novels were infused with such a sense of wonder that it seemed impossible that Mary Robinette Kowal could possibly top the race to the Moon and then to Mars. After Mars, where could the series go? Where would the series go? The answer is suggested in the title - back to the Moon and back to a story that initially seems smaller in scale but which has just as much emotional resonance as the meteor changing everything in The Calculating Stars or the moment Elma York blasted off Earth and into space or the first step onto Mars. It seems improbable, but it is a testament to Kowal's skill and craft that a presumably smaller story feels as big as this one does.

The Relentless Moon is a big story. Narrated by and following one Nicole Wargin, The Relentless Moon runs concurrent with Elma York's voyage to Mars but focuses on the problems of Earth - still seen through the lens of the astronaut program. There is a base on the moon that is expanding, taking colonists, and there is the potential for a wider expansion into the solar system. The thing is, the United States aren't doing quite so well.

Earth First is not the center of The Relentless Moon, but it is ever present and even though the readers sympathies are likely with the astronauts and the space program (these novels are celebrations of science and exploration, after all), a growing understanding of why Earth First is appealing to many does come through. They may not have all the facts or they find it impossible to believe the hopelessness of the the Earth's future if they do, but spending so many resources on colonizing space does leave so many people behind and hurting.

The core of the novel, really the shape of the novel is Nicole Wargin. Wargin is an astronaut herself, one of the original class - which also puts her near the end of her career as she is in a continual fight with her body to maintain the requirements of the astronaut program. Wargin is also the wife of Kenneth Wargin, the governor of Kansas (where the space program is now located after the meteor) and potential candidate for president. That matters because Nicole Wargin's mission to the lunar base is fraught not only with sabotage from Earth First but the political considerations and consequences of being a politician's spouse.

There's a lot going on in The Relentless Moon and Kowal keeps everything moving and flowing together with remarkable deftness and an underlying compassion that smooths the edges off even the harshest aspects of the novel - including Nicole's eating disorder, racial issues, domestic terrorism, and a desperate fight for survival on the Moon. Everything is handled with sensitivity, though Kowal does not shy away from the emotion of the worst moments - it's more that Kowal is such a smooth writer that the reader is in safe hands. The novel leans into the pain, but with a light touch.

The Relentless Moon is more than the pain, of course. I am very much not the first to appreciate the generally healthy marriages in the Lady Astronaut novels, but reading about a relationship where both partners support each other and recognize the sacrifices they make to achieve goals and just build each other up is absolutely refreshing. Equally refreshing, especially perhaps when reading this novel during a pandemic, is that science is celebrated and problems are typically solved by smart people working very hard to come up with a solution. To paraphrase both Mark Watney (The Martian) and Vanilla Ice: if they have a problem, yo they'll solve it by sciencing the shit out of it. That's delightful. It's also important. There is violence in The Relentless Moon, but it is mostly off stage. The struggle is that of science, engineering, imagination, and decency. This novel, like the two Lady Astronaut novels before it, is about striving towards excellence and truly building a better tomorrow even in the face of a devastating future. The Relentless Moon is hopeful science fiction, and that's something worth celebrating - especially when it's this good.

The Math
Baseline Assessment: 8/10.
Bonuses: +1 for being generally optimistic science fiction
Penalties: -1 because sometimes repetition can come across as excessive
Nerd Coefficient: 8/10 "well worth your time and attention"
Reference: Kowal, Mary Robinette. The Relentless Moon [Tor, 2019]