Derek Künsken’s The Quantum Magician is a highly entertaining far future heist novel with excellent worldbuilding and character voices that make for an entertaining read. 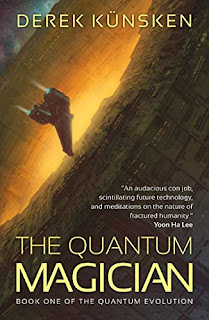 It’s the 25th century and Humanity has spread out to the stars. Thanks to some often highly suspect genetic experiments, Homo sapiens is not the only branch of humanity extant. One branch, the Homo Quantus, has an ability to process information and see things on a quantum level, which makes them fascinated with the search for knowledge and unlocking information. Belisarius, or Bel as he usually is referenced throughout the novel, is atypical for a Homo Quantus. For him, an ivory tower life of research is not suited to him. No, he’d rather be pulling off cons, and he has a whopper of a one involving a fleet, a fantastic space drive, several others of the branches of humanity, and of course a plan within a plan for his heist.

This is the story of Derek Künsken’s The Quantum Magician.

The novel’s strength lies strongly with the world that the author presents. It’s a world very much in the model of novels like the works of Hannu Rajaniemi, there is a high density of new concepts, worlds, polities, future history, technologies and ideas packed in a relatively slim novel. There is a very international feel to humanity in the 25th century that isn’t just “America in space” that a lot of authors  fall into the trap of. Francophone polities feature strongly in the novel, for instance, and there is a multilingual feel to the depicted future that I really appreciated and really liked.

The author also does a great job with the con artist himself, Bel. Making him an atypical, and sometimes labeled as a “failed” Homo Quantus means we get the best of both worlds, especiallty once Bel gets another Homo Quantus on his team. We see what a Homo Quantus should be like, and how Bel stretches as a rope between baseline humans, and the more typical members of his species. He comes across as a mostly very human character, but with his occasional descents into a fugue state, shows just how far along a new evolutionary path that he has gone. This is also true of the other human species we see, the Homo eridanus, who live in cold, pressurized environments, and the Puppets, small bodied humanoids who have been genetically engineered to worship a particular group of humans. Kunsken takes this extremely touchy and prickly idea and looks at it from an ethical point of view in a nuanced and thoughtful way.

The heist itself is best described in general and vague terms,especially the heist within the heist. Bel is approached with being asked for help in moving a fleet of advanced warships through a tightly controlled wormhole. Bel’s payoff for this would be a ship outfitted with the groundbreaking space drive that the fleet itself has. Such a craft would be worth millions, even split with a team. The author gives us a cross section of humanity in the 25th century with Bel’s team: An enthusiastic explosives expert. The aforementioned second Homo Quantus. A sweary Homo eridanus. A Puppet, and a descendant of the humans who created the Puppets (the territory that the fleet must move through is controlled by the Puppets, making them the “inside men” of the operation). An artificial intelligence of a very idiosyncratic sort.

And Bel has a plan within a plan for this gathered team to gain something even more out of the situation. And as you might expect, this being a heist novel, once the heist gets going, things do not always go smooth, and not always falling to Bel’s backup plans. Improvisation and a bit of scrambling to salvage a bad situation is a feature of even the most perfectly executed heist, and the Quantum Magician leverages that for excellent plotting.

I consumed the book in audio format, narrated by T Ryder Smith. I think he did a fantastic job as a narrator. He ably captured the different characters with distinct intonations, cadences and expressions of modulation. In some cases, like Stills, I can’t imagine how I could mentally improve on reading the Homo Eridanus’ dialogue in my mind much better than how Smith as a narrator brings him to life. The other characters, too, really are rewarded by the narrator’s audio work.  The complex jargon and ideas come across well, and I was consistently entertained throughout.

My major criticism of the novel is something that a lot of SF heist novels share and that is the need for a long ramp up before the actual heist can get itself up and running. How the author manages to show us how the team is put together and why we should care about them even as we don’t know much about the other team members takes a very deft touch. In a couple of cases, the author manages to bring us into the character’s world and personality rather quickly, but for a couple of the members of the team, they just don’t quite leap off the page. This does hurt the novel in the second half, as the heist proceeds, since it means there is a bit of unevenness in how I was invested in the various parts. of the team and the scheme.

Overall, however, The Quantum Magician is a promising debut, and it appears to be the first in a series, with The Quantum Garden coming in October. Based on this first novel. I would be happy to read it. I would be happier still to listen to it, should T Ryder Smith provide the narration again in an audio format.

Bonuses : +1 for an intriguing and interesting future world. +1 for the goodness of a heist chassis for the SF novel.

Penalties : -1 for a few of the heist members and their subplots being less well imagined and presented than others.

Nerd Coefficient: 7/10. an enjoyable experience, but not without its flaws