Now that I have finished my re-read of N0S4A2, I am looking forward to watching the series on A&E.  I watched the first episode the other day and was surprised at how different it was from the book, but I am going to maintain an open mind about the changes as television is a much different medium than a book.  Thinking about this series, the upcoming Watchmen series, Amazon's The Boys, other comic book based series, and the fact that we have a future Locke and Key series and Y: The Last Man, reminded me that we are truly in a golden age of comics (and comic adjacent books) reaching the small screen. Streaming platforms have embraced comics after the success of The Walking Dead and I am all for it. I am sad The Sixth Gun series wasn't picked up, but would love to see Sweet Tooth and Mind MGMT on the small screen in the future. 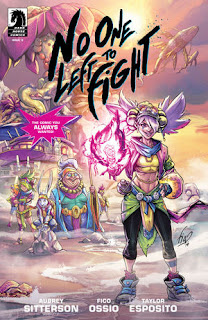 Pick of the Week:
No One Left to Fight #2 - This series from Aubrey Sitterson and Fico Ossio is quickly becoming one of my favorites. It is a book that I would recommend to my friends who have an interest in comics, but think that all books are about superheros. Sitterson and Ossio do an incredible job focusing on the complicated relationships between characters in the first two issues. Vale is a hero who saved the world a few years ago. He has returned to join his old classmates and visit the site of his battle and connect with his old teacher. Timor, a former friend and classmate, measures his worth compared to Vale and is having a hard time seeing his warm reception. Ossio's color palette and art in this book feel like a fusion of Saga and anime and immerse you in this fantastical world of interesting people and creatures. Vale is also suffering from some sort of condition and there is a shady looking being who was spying on them as they ventured out to meet their teacher. I fear that the individual is going to return to Timor's home and attack his kids. This is a great time to hop on board with this series as the first issue got a reprint so picking up issues one and two from your local comic book store should be a breeze.

The Rest:
Babyteeth #15 - Donny Cates and Garry Brown got me good on this issue.  It has been a while since we have visited Sadie and Clark, but it looks like they have escaped back through the portal due to the literal wrath of God.  God shows up and kicks ass in a chaotic and thrilling fight that is a delight to read. Sadie's father appears to be redeeming himself and it looks like he is finally putting his daughter's needs before his own. After Sadie and crew made it through the portal I was not prepared for what happened next and am beyond thrilled for the next issue.  This made me want to go back and read issues 1-14 again.

Daredevil #9 - Matt Murdock is asking some pretty big questions as he ponders God and why humans exist on this planet we call Earth. Talking to a nun about understanding signs from God, Murdock learns about a missing boy. In addition to this he is currently trying to understand why Mindy Libris, of the Libris crime family, called a hit on him. She is a sweet person who is tangled in the drama of her family and only wants a simple life.  After helping out with the missing kid, despite wanting to retire from being Daredevil, Matt finds himself in Mindy's bookstore. With the current arc being penned by Chip Zdarsky you can guess where this is heading.