The Quantum Magician is a grim but enjoyable heist, though it never quite builds its post-human worldbuilding elements to their full potential. 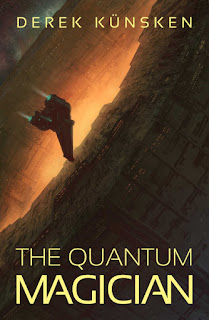 It's funny that, despite listing "found families" among my favourite tropes, this doesn't often translate into found family's grouchy, backstab-prone cousin, the heist story. It might be the much higher trust deficit and that's usually present in a team put together explicitly to do a single job, or the fact that characters trend towards chaotic neutral and don't tend to smooth out each other's rough edges in the same way. Or, maybe I just don't like the actual heist-y part of a heist, which sort of functions as a reverse mystery: by definition, we know in advance who did it, we're just not sure about the how. It's quite rare for the goal in a heist to be something an audience a priori cares about, so it's down to the author to invest us in some combination of characters, mechanics or worldbuilding so we want to follow our not-heroes through the inevitable failures, double-crosses and eleventh-hour plan revisions to get their job done.

The Quantum Magician goes in hard on many elements of its worldbuilding, putting us in a far future spacefaring society with some recognisable but unusual political powers. Bel's client, Iekanjika, works for the Sub-Saharan Union, a small player in galactic terms, approaching him to move 12 warships through a puppet-controlled wormhole. Bel very quickly realises there's something "off" about these ships, which shouldn't exist in the first place and employ highly advanced technology beyond what most of the major players in the galaxy are using at this point. The first ten percent of the book puts us through some early sleuthing and action scenes which showcase Belasarius' abilities as a homo quantus: a member of a post human species able to enter mentally altered states known as savant - where the individual maintains their identity but has significantly higher data processing capacity, at the expense of interpersonal abilities - and fugue, which suppresses their identity entirely. These different brain states take a great deal of additional energy and there are clear physiological tolls to entering it, with fugue state in particular inducing levels of internal heat which homo quantus are only partially adapted to cope with. Bel, we learn, is a highly unusual Homo Quantus, both in terms of his abilities, which don't function as intended, and because he has left the rest of his people and struck out on his own in the galaxy, turning his back on the knowledge-seeking purpose his species were created for.

This sense of manufactured purpose also plays a part in the stories of the other two post human species introduced in The Quantum Magician. There's homo eridanus, a species adapted to live in a high pressure underwater environment after a terraforming accident, but whose racial psyche involves a lot of deep self-deprecation and disgust for their own position. And then there's homo pupa, known as "Puppets", who have a rather larger role to play in the book. Half the size of most baseline humans and genetically engineered to be perfectly servile to another race, homo pupa have channelled that biologically motivated religious awe into a culture which has murdered or enslaved their former owners and now maintains a deeply disturbing relationship to freedom, bondage and torture in general. The sections of the book involving the Puppets - and there are many, as they control the territory Bel is trying to heist is way through - were by far my least favourite elements of the book, veering quickly into gratuitous torture and gore with little narrative payoff. It doesn't help that two of the least compelling characters in the heist team get assigned to this subplot, meaning I was already starting from a position of indifference when it came to all the grim escapades in this plot thread.

As you might expect, all three post-human species are represented in Bel's heist team, alongside an AI which believes it is the reincarnation of Saint Matthew (to the complete despair of the bank which programmed it), and a couple of baseline humans. Despite having fairly interesting backstories by virtue of the unconventional worldbuilding, the personalities here were pretty classic for the genre: there's the leader, the war-weary veteran on his last job, the amiable arsonist, the unemotional, technical one, the highly-strung one, the naive one who is doing it for love, the sweary one... you get the idea.

Kunsken also builds a very dude-heavy team, made more frustrating by the fact that 50% of the team's women are Bel's love interest (note: he only has one love interest); despite having multiple post-humans and an AI, there is also no non-binary representation. Once again, I have to own my personal biases here: having such a huge majority of men inevitably limits my interest in the characters as a whole. In addition, having so many characters with biologically defined quirks ironically makes it harder for an author to sell them on their personality quirks, and if you don't find yourself intrinsically invested in the tragic post-human condition in general, there's not much going on at the character level that's going to improve your connection. The exception, for me, was Stills the homo eridanus, whose contributions to the team come with a boatload of swearing and self-loathing and some classic but charming bonding with Marie, the amiable but morally adrift demolitions expert. I might consider a sequel if it were just Stills and Marie flying a dual pressure ship while swearing at each other and blowing things up, like some kind of literary version of the FTL video game? That might be a long shot though.

There's a lot going on in The Quantum Magician, from individual character arcs of varying compexity to geopolitics to thematic elements about purpose and religious observances of such. Ultimately, none of the elements really rise above "solid": there are things in The Quantum Magician because they are necessary to set up the conditions for a heist, and other things that exist as background in a world that's bigger than the plot of just one heist, and there's just enough of both of those that everything basically works. I missed all those hard-to-define touches that make a secondary world "pop", and despite all the creativity in the mechanics of the worldbuilding, it all fell a bit flat for me.

And so, alas, The Quantum Magician didn't do much to overturn my scepticism about heists. Fans of the genre will likely find an readable adventure here, and there's some interesting ideas about the future of the human race and what we might evolve ourselves into, even if these possibilities are inevitably taken towards the grimmest outcomes possible by characters it's not easy to care about. If the premise appeals, and you don't mind reading yet another story about dudes, don't let me stop you. As for me, I'm going to go back to my found family space stories and keep waiting for the daring heist adventure that changes my mind.

Bonuses: +1 The sweary one and the amiable arsonist are the actual greatest

Penalties: -1 Of all the intriguing places you could have gone with this post-baseline human society, you had to set it on that planet? -1 Outside the sweary one and the arsonist, characters are hard to connect with