It feels good to slide back into a regularly scheduled Thursday Morning Superhero now that San Diego Comic Con is behind us. SDCC motivated me to return to Joe Hill's books and I have recently been enjoying re-reading N0S4A2 in preparation of finally watching the series on AMC. 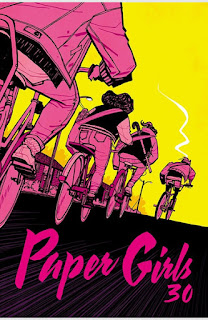 Pick of the Week:
Paper Girls #30 - Brian K. Vaughan, Cliff Chiang, and Matt Wilson's epic nostalgic time traveling adventure reached its conclusion this week. This issue brings us back to where it all began and with the girls delivering papers on Halloween and is really sweet. I won't spoil anything, but it had a very Terminator meets Stranger Things finale that somehow works really well. I particularly enjoyed the cameo of the guardian angel and it was fitting to have such a simple ending to what was a truly surprising story. I would not have imagined the world that Vaughn was bringing me into after the first issue and love that the girls have lived so many different lives in just 30 issues. This is without a doubt a series that you should check out and one that I will revisit every couple of years.

The Rest:
Joe Hill's The Cape: Fallen #4 - I first read The Cape many years ago and it always stuck with me. Based on a story by Joe Hill, the comic followed Eric who, upon learning that a cape is giving him superpowers, uses those powers to seek revenge against anyone who has wronged him. In the original series Eric vanished for three days as he attempted to understand his powers.  This series informs us of what happened during that time. After returning to his childhood cabin, Eric stumbles across a group of accepting LARPers and he enacts his final vengeance in the finale of this mini-series as he goes full evil before setting up his plans that were in the Eisner nominated series. If you enjoyed Brightburn, this series is going to be right up your alley and I will admit I enjoyed the original series far better than Brightburn.

Captain America #12 - In his attempts to fight the Hydra propaganda machine, Captain America is seeking justice on the streets, but people aren't sure what to make of it. They are fully convinced that he is enemy number one and he needs a better plan. While Rodgers is getting the help from an old friend and a team of female supers, Nick Fury is trying to locate Rodgers to see if it really is him behind the mask. I am curious how he is going to navigate becoming a public figure again and how he can take down Hydra, and mayor Fisk.

Manor Black #1 - A new horror series from Cullen Bunn and Brian Hurt!  There are a lot of competing interests to consider in this first issue, but there appears to be a young woman on the run from a powerful group of magic wielders who will stop at nothing to achieve their means. They already murdered four other magic users and a local police officer. The young lady made it on the property of Roman Black, a powerful sorcerer on his own who is currently considering a new heir to his magical throne. Very curious to see where this is headed and thrilled that Hurt and Bunn are together for a new story of the occult.