Microreview [book]: The Queen of Crows, by Myke Cole

Queen of Crows is an entirely successful sequel to The Armored Saint which develops both the world and compelling central character at the heart of Cole’s dark medieval mecha universe. 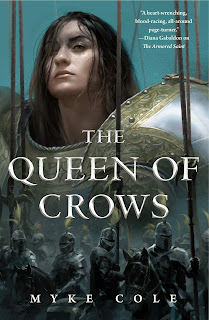 In Myke Cole’s The Armored Saint, he introduced Heloise, a  young woman in a medieval fantasy setting who strikes a blow against tyranny by taking control of a war machine, a medieval, magical mecha. Fighting both a devil and the oppressive government that put her on the path of resistance, Heloise, at great physical and personal costs, struck a blow for freedom for her and for the people of her village.

In Queen of Crows, author Myke Cole explores the burning question: Now what? A blow for freedom has been struck, yes, but the Sacred Throne, and in particular, the Inquisition-like Order is not going to take this lying down. Heloise may well be a saintly figure, possibly even a holy  Palatinate, but her actions are not an unalloyed good. The Empire will, indeed, Strike Back, and it is only a question of time before overwhelming force is brought to bear on Heloise and the people she has sworn to protect. This leads to Heloise and her people going on the road, meeting others who have not done well under the Empire’s tyranny, and asking hard questions about oppression, revolt, tyranny, resistance, prejudice, and at the same time providing solid medieval fantastic action.

The novella’s heart is when it is engaging those hard questions. Cole introduces the Kipti, The Traveling People, a group of people very much like medieval Romany, and uses them to probe and ponder questions of prejudice, fear, freedom and tyranny. It won’t be a surprise and not much of a spoiler to reveal that Heloise’s goals and actions do align with the Kipti, but it’s not a simple matter of the Kipti giving up their own identity and becoming subsumed by Heloise. Instead, we get to see a side of the Empire from the position of the truly oppressed, showing that even with Heloise’s rebellion aside, even given the disgruntlement on far flung portions of the Empire, there are plenty of people, often ignored when not actively despised, who suffer under the tyranny of the Empire, here and now. The costs of tyranny and the costs of acting against it openly versus just shouldering the burden and getting along are deeply explored, and the Kipti are a major part of the exploration of those questions in the novel.

The novella’s soul, though is when it is engaging in its action beats. Cole has cut his teeth on military fantasy and military matters in general, and his set piece encounters are excellent. The highlight of the book is an  extended multichapter sequence where Heloise and her villagers are confined within a walled town that they have captured. The Empire’s forces have caught them there, and the manpower to mount a strong defense, even with Heloise and her war machine, is dangerously weak. It is another example of engaging in those hard questions, but also gives us the action beats that Cole’s work is known for. The novella could be sumed up as “Come for the action with a medieval mecha, stay for the exploration of social questions that elevate the novel from a straight up medieval fantasy action into something that speaks to our time and situation.

The novella, like its predecessor is dark and perhaps even more so. The title, The Queen of Crows, is very well earned indeed (and possibly meant to evoke GRRM's A Feast for Crows). The costs of war, physically, emotionally, socially are not shirked from. This is not grimdark in the sense that there are morally grey characters and there is really no one to root for. As flawed as she is, Heloise tries to work for the side of right and light. But her journey is not a light read, and the subjects that the novella engages in and the world that Cole builds is not a pleasant one. It’s realistically so--this is not a “dirt covered peasants” sort of nonsense, but the realities of a medieval land at war are depicted and even in a fantasy medieval world, they are rather unpleasant, and some readers may understandably want to shy away from it.

The Queen of Crows is about 20% longer than The Armored Saint, and I found that extra wordcount was put to good use. The Armored Saint was almost a bit too brisk and short for its own good for what it was trying to do. The Queen of Crows’ extra wordcount allows the writer, I feel, to explore these questions, build a world, explore Heloise and her role and place, and still hit those action beats. In that way, I think it is better than its predecessor. Bring on The Killing Light! I am very eager to see how Cole resolves the conflicts, external and internal, physical, emotional and diplomatic that make The Sacred Throne Trilogy

Bonuses : +1 for deep exploration of social questions, lifting a medieval fantasy action novella into a work that speaks to our times.

Penalties : -1 for maybe being a bit too dark. Realistically so, but even so, the author’s ruthlessness is perhaps not for all readers.