With the new Star Wars footage coming out of D23, I was excited to start prepping for the Rise of Skywalker by reading some good old Star Wars comics. While the buzz surrounding Rey and the lightsaber and the Mandalorian trailer was terribly exciting, the news that She-Hulk is getting her own Disney Plus series is what I am most excited about. 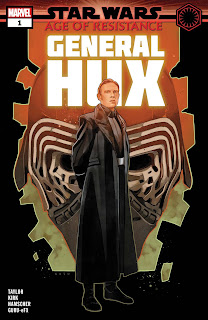 Pick of the Week:
Star Wars Age of Resistance: General Hux #1 - I was extremely pleasantly surprised how much I enjoyed this book.  I find Hux to be a highly entertaining character and wanted to learn more about this sniveling punchline.  Turns out his mom was a cook and he was conceived by an Imperial general and had a rough childhood. We learn this through a very quick flashback and then are treated to a delightful story that demonstrates how intelligent and utterly deplorable Hux is.  The tension between Hux and Kylo Ren is truly entertaining and I loved learning that one of the reasons Snoke keeps someone like Hux around is due to his blind ambition, even if those ambitions are for Snoke's title.

The Rest:
Captain America #13 - Sharon Carter, the Dryad, and the Daughters of Liberty are beginning the process of attempting to clear Steve's name through a series of good deeds. Nothing like a good PR campaign to clear the name of Captain America. When you are arrested for murder and then break out of jail, it will take a lot of good deeds in order to gain the public's trust. I am personally a fan of when comics get political and this issue took on issues surrounding the border and migrant workers. It was refreshing to see this handled with respect and is a PR campaign that would be effective for me. This seems like a bold move considering the actions that Mavel's CEO took surrounding the current political climate. I am excited to watch the PR campaign and curious to see if the Dryad and crew will be able to hold Nick Fury off long enough to clear Steve's name.

G.I. Joe #266 - I noticed that a new arc of G.I. Joe was starting so I thought it might be a good job to see what is happening in one of my favorite cartoons from my childhood. Overall the comic had some flaws and was hampered by some painful dialogue, the overall story has captured my attention and I am curious to see what is going to happen during this arc. Cobra has a grand plan of capturing and brainwashing the original Snake Eyes, in an attempt to turn him against Joe from a tactical and emotional standpoint. It was a wonderful nostalgic trip reading this book and the closing series of pages showing Cobra having set up shop in nice looking houses right outside of the military base.