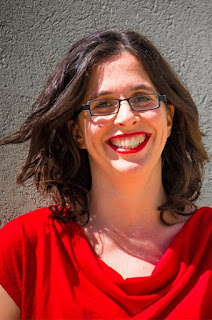 Keren Landsman is a mother, a writer, a medical doctor who specializes in Epidemiology and Public health, and a blogger. She is one of the founders of Mida’at, an NGO dedicated to promoting public health in Israel. She works in the Levinski clinic in Tel Aviv. She has won the Geffen Award three times, most recently for the short story collection Broken Skies. Her website is http://realitybugs.me and she can be found on Twitter @smallweed.

Today she shares her six books with us.

I just finished Spoonbenders by Daryl Gregory, which tells the story of a family with super powers. It was funny and tearing and I got all the feels reading it. I started reading The Calculating Stars by Mary Robinette Kowal, which is science fiction but from a surprising angle. I love Kowal's writing, and since I drive 4-5 hours a day, I get to listen to her reading it and it's awesome! In Hebrew, I just finished Whereabouts by Mayan Rogel, which is a mystery set in a cult. She told me a bit abut the research she did for this book, and it was horrifying and wonderful at the same time.

Perhaps the Stars by Ada Palmer. I read Too Like the Lightning and Seven Surrenders one after the other without being able to stop, and the only reason I didn't start The Will to Battle is because I didn't want to leave the world. That way I knew I would have something to wait for. I love the courage it takes to write a utopian future while considering the implications of changes in society and religion. I love what Palmer did with her characters and the way the world is described. I think there's a lot to learn from the series about writing science fiction, and I can't wait to see how the series ends.

So many. So so many... At the top of the list are Hyperion and its sequels by Dan Simmons, The Ring of Charon and its sequel by Roger MacBride Allen, and A Room of One's Own by Virginia Woolf, which is the most likely to be re-read since it's the shortest of them.

Oh dear. I think my greatest disappointment was when my kids were young and I wanted to read Jules Verne to them. What I remembered as wonderful and interesting book full of adventure, turned out to be one filled with lots and lots of descriptions of fish. I'm afraid the young Landsmans have yet to read Twenty Thousand Leagues Under the Sea due to that unfortunate experience.

Just one? May I pick more than one...? I think there are two books that influenced me the most as a reader, and as a result, a writer. The first was The Lion, the Witch and the Wardrobe by C. S. Lewis. It was the first fantasy book I read, and I think it was the first adult book I ever read on my own, though. I re-read it every few years. I didn't get the religious references, as a Jewish girl with no knowledge of Christianity, so for me it was always a book about an exciting adventure waiting behind a door.

The second is Robots and Empire by Isaac Asimov. It was the first time I've ever read science fiction. I checked it out from my school's library since I finished every other book there, and I had no idea what was it about. The first paragraph got my rolling my eyes saying "It's one of THOSE books?" but by the end of the first page I was hooked.

6. And speaking of that, what's *your* latest book, and why is it awesome?The Heart of the Circle is urban fantasy with love, magic, politics, drugs, marginalized populations, and a very Jewish mother. It focuses on a group of friends who try to live their lives while extremists want to end them.

Also, I've always wanted to blow up Tel Aviv, and finally I got the chance to do it without all the mess afterwards!