Nanoreviews: Song of Blood and Stone, Song of the Abyss, Nocturna I think this is a reading first for me: the version of the first book in the Earthsinger Chronicles I read is billed as an "expanded edition", adding substantially more text (around 50,000 words) and a secondary storyline to a novel which has previously had both self-published and traditionally published incarnations. Having not read the previous editions, I was slightly apprehensive about what these additions would do to the story structure and how to handle them as a reviewer, but I was rewarded with a book whose dual stories work well together in terms of pacing and complementary worldbuilding, and despite the fairly limited interactions between them, I wouldn't have known this was an "expansion" without the note in the title.

At the heart of the novel is the story of Jasminda, a mixed race woman living near the border between the lands of Elsira and Lagrimar, countries which have been in a magically-induced standoff for decades following open war. Looking Lagrimari and able to use "Earthsong", a kind of magic particular to that land, Jasminda is treated as an outside within her Elsiran community and following the death of her parents she's now struggling to maintain control of her family's land in the face of greedy distant relatives. When a group of Lagrimari soldiers show up, assuming by Jasminda's presence that they're in their own country and bringing a rather handsome and valuable prisoner with them, Jasminda is thrown into unfolding events between the two kingdoms, with epic results.

Song of Blood and Stone took a while to get going for me, and it wasn't until the second half, when Jasminda and Jack arrive at the capital of Elsira and some fairly significant plot shifts (and romance progressions) take place, that I started to wholeheartedly enjoy the reading experience. Once I got there, though, I found this to be a satisfying fantasy romance which leans into its tropes effectively, while still providing a novel worldbuilding backdrop for its protagonists to grapple with. Particularly neat were the opening sections to each chapter, which build an animal-based mythological pantheon for Elsira through snippets of different fables. Best of all, there's already a sequel available for those who enjoy this entry into the world of Elsira and Lagrimar.
Score: 7/10 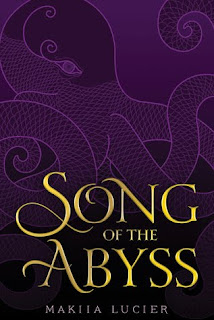 I picked up a copy of this under the impression that it was a standalone, but it quickly turned out that it's a sequel to 2018's Isle of Blood and Stone (yes, it's that similar to the title above - we may be reaching "noun of noun and noun" title saturation point, but I'm confident that they're quite different books!) Reading sequels before their predecessors usually sets off all the brain itches for me, but I'd got far enough into Song of the Abyss, and satisfied myself that the plot, with its significant time skip, didn't require knowledge of the previous book. Plus, I was really into it. So I kept going.

And I'm glad I did! Song of the Abyss follows Reyna, a young woman apprenticed as an explorer on the island kingdom of St. John Del Mar: a seafaring society where this is both a highly prestigious and also highly masculine career. Reyna returning from a mission which she hopes will allow her to become a Master Explorer at an almost unprecedentedly young age, when her ship is attacked by a mysterious force which kills a few of the crew but leads to the complete disappearance of the rest. Barely escaping and harnessing a couple of sea creatures to take her to a nearby island (a slightly left-field development which doesn't really get explored any further, but OK!), she's rescued by a (handsome, yes, why do you ask) prince and, after a few shenanigans, ends up on a collaborative mission to a secretive faraway land.

What follows is a fun adventure which really allows its characters to shine. Reyna in particular is a great protagonist, whose supportive found family on her island and on the ship make for a great contrast to some of the wider social forces she's struggling against. The one awkward note here is in its treatment of the aforementioned faraway land, whose culture is never given the nuance to rise above "glorious but brutal empire", with a lot of real-world references to imperial China thrown in. There's enough variation in the characters from this place, and their feelings about the more problematic traditions of their country, that it doesn't come across as wholesale stereotyping, but it's still a frustratingly problematic note in a book that's otherwise full of benevolent monarchs of western-inspired cultures. Despite that, Song of the Abyss ticked a lot of my boxes and I'll definitely be going back to the first book in the series at some point.
Score: 7/10 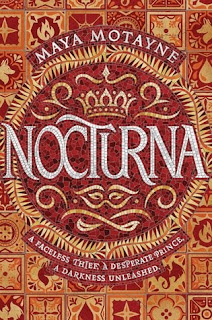 
Motayne's book isn't actually YA, but with its young protagonists and the tropes behind its dissatisfied-prince-meets-wily-thief narrative, it's definitely in that "crossover" space. It's a story whose worldbuilding draws on Latinx culture, with a colonial history for Castallan, the land where the action is set, and regular use of Spanish vocabulary within the story's dialogue and concepts. Nocturna also builds a magic system which gives each character a unique, inherent propio or magical talent, alongside a learnable system of elemental manipulation and other skills, with interesting results. The story focuses on Alfie, or Prince Alfehr, a learned prince who is grappling with the recent disappearance of his older brother in an attempted coup; and Finn, a thief whose propio is face changing and who is attempting to escape an abusive past. Together, they fight dark magic - and occasionally each other.

Nocturna takes a while to get its pieces in place, setting up its "unlikely" (though not to anyone who reads this sort of fantasy) pair to meet while pursuing their unrelated problems first, before bringing them together again and kicking off the main plot in a way that had me reaching for the "that escalated quickly" gif more than once. Despite a sticky couple of chapters where that main plot gets pulled into place, and an antagonist who plays the "I have you beaten but I'm going to let you go in order to toy with you again next time" card a little too liberally, Nocturna offers a great adventure and satisfying arcs for both Alfie and Finn, offering some great set pieces (the prison break is a particular highlight) and building their relationship in a really sweet way. Although it wraps up quite well, there's plenty of stuff left hanging for a sequel, and I'd love to see this refreshing fantasy build into a full series of adventures that flesh out the world of Castallan further.
Score: 7/10