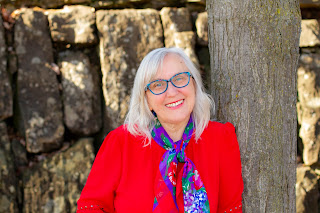 What is magic? As imagined by Julie E. Czerneda, it’s wild and free, a force of nature and source of wonder. She first explored this theme in her Night’s Edge series, starting with the award-winning Turn of Light. In The Gossamer Mage, Julie goes further, envisioning magic not only as integral to landscape and history, but well aware what we’re doing with it. That tie between us and other, the profound changes we make by connecting, have always informed her work, be it fantasy or science fiction.
Mage is Julie’s twentieth novel published by DAW Books, and she couldn’t be more proud to belong to this esteemed publishing family. For more about Julie and her work, please visit czerneda.com.


Today she shares her six books with us.

A Play of Shadow. Yes, it’s my own, but I’m annotating it with notes for an upcoming sequel. I’m writing a special enovella called “A Dragon for William” that follows on the heels of Play in terms of plot. It comes out in December. I’ll confess revisiting Marrowdell is delightful. Oh, those house toads!

That’s easy! I’ve just seen the cover of C.J. Cherryh’s Resurgence, the 20th installment in her Foreigner series from DAW. It’ll be released in January 2020 and I can’t wait. I reread all, or most, of the preceding books before each new one. Treasures! I’m so excited…

I’ve recently bought a hardcover (SFBC) edition of Pride of Chanur by C.J. Cherryh. I haven’t reread that one in years, but now it’s sitting right there on my shelf, calling to me! It was the first CJ I read. I spotted it at the university bookstore and blew my budget (at the time) to buy it at once. First contact, from the alien pov? I was hooked.

Hmm. Written in Red, by Anne Bishop, Book One of The Others. When I first read it, I enjoyed the story. Anne’s an amazing storyteller, after all. But when I reread it, as is my wont when a new book in a series comes out, I discovered depths I’d somehow skimmed over and have become, well, smitten.

Andre Norton’s Star Rangers (re-released as The Last Planet). Not only the first SF I ever read, but formative as well. Her interplay between several alien species, biologically/culturally different yet able to become comrades and friends, to bring out the best in one another? A vision I took to heart then and have continued in my own work.

My latest is a standalone fantasy called The Gossamer Mage. In it, I imagine a world in which magic is alive and aware. I wanted to look at why we value magic, what it is, and what we’d sacrifice for it. Mage is intimate, dark, and a story I deeply love, even when it makes me cry. Maybe especially then.