The big nerd controversy this week is the tangled web that still exists between Sony and Disney and Spider-Man. It appears that Disney has pulled Kevin Feige from the next film as Disney doesn't technically own the IP.  As nerds often do, they overreacted and will hopefully realize that there are concerns with the growth of Disney and the negative impact that can have on the television and film industry.  Don't get me wrong, I hope Spider-Man remains in the MCU as much as the next person and think he will, but I do have concerns with Disney seizing control of everything. 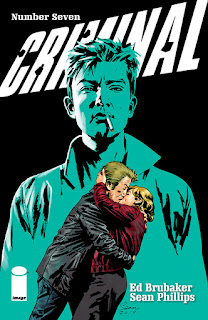 Pick of the Week:
Criminal #7 - Chapter three is off to a dark beginning that feels all too realistic given the current climate. This issue follows Teeg's son, Ricky, after he returns home after a stint in juvenile hall.  He is surprised to learn that his dad appears to have cleaned up his act, is with a younger woman, and moved the family to the suburbs. Juvie changed Ricky and he is currently an outcast amongst his group of friends and he no longer feels like a part of his family. I won't spoil the ending, but this series from Ed Brubaker and Sean Phillips has always felt incredibly real and poignant and it appears Chapter three will be no different.

The Rest:
Daredevil #10 - It has been interesting watching Matt Murdock struggle with his own identity. He can sense Hell's Kitchen falling apart all around him, but he isn't ready to return as Daredevil until he comes to terms with the fact that he killed someone. Toss in the crooked cop story and the pot starts to boil over in this issue, but in helping Detective North, he only made things worse for himself. Chip Zdarsky brings back a familiar face at the end of the issue that will definitely have a big impact moving forward.

Doctor Aphra #35 - After taking some time off from this series I decided to revisit it and there is a lot to take in.  Aphra is currently wanted by both the Rebels and The Empire because of a powerful Jedi artifact she stole. She does not want to turn it over to the Rebels as they plan on building a Death Star Jr. that would kill the Emperor, along with thousands of innocent bystanders. In turning herself over to the Empire in an effort to at least make it out alive, she is taken under the tutelage of Minister Pitina Voor, part of the propaganda and misinformation wing of the Empire. Turns out she wants to overthrow the Emperor and with Aphra being in known possession of the Empire Vader has his eyes sought on his former partner.