One of the most formative reading experiences I had as a teenager was my discovery and devouring of Melanie Rawn's Dragon Prince. I had favorite novels before Dragon Prince and I certainly have had favorites since, but Dragon Prince has maintained a preeminent place in my imagination and in my heart and my love and appreciation for these novels have not waned. This has been so much the case that when Netflix developed a show titled The Dragon Prince, I was confused that it wasn't based on Melanie Rawn's novels but rather a new series from the creators of Avatar: The Last Airbender. Now that I've seen both seasons of the Netflix show, I'm still somewhat confused and surprised every time that this isn't a show about Rohan and Sioned and Roelstra and because of that, I wanted to revisit Melanie Rawn's novels.

This re-read is perhaps somewhat unique in other re-reads I have done in that when it is complete it will have taken place over a period of ten years. The first four essays here are adapted from previously published essays that I began writing in 2010 and chipped away at over the years. The adaptation is something that may otherwise have been invisible to readers here, but it is worthwhile to be up front about. The foundational essay for this series can be found here.

When I began re-reading Dragon Prince and writing about the series, I wondered if the novel would hold up to the esteem time and memory have given it. I wondered if I would still be inclined to read the other five novels set in this world.

The short answer is yes. 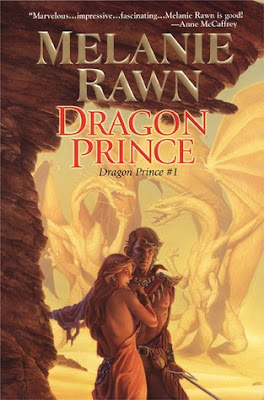 Oh, and the cover art? That cover is the reason I pay attention to cover art and who the artist is. Michael Whelan’s cover is striking and it made the younger me take notice of his work. I also remember Whelan’s work with Meat Loaf’s Bat Out of Hell II album. They are inextricably linked in my memory. This is the iconic fantasy cover of my history.

One thing to note: there is an excellent chance of spoilers in the below conversation. This is my re-read and not whatever I might consider to be a “proper” review. If you are looking to avoid being spoiled for certain events of the novel AND the series (though I’ll try to limit series spoilers on a per novel basis), please just know that I think Dragon Price is a fantastic novel and that it remains one of my favorites of the genre, and that you should probably go read it now.

Melanie Rawn is not a writer afraid to do terrible things to her characters; her heroes in particular. Let’s just get this out of the way from the start: bad things happen to the characters we care about, and sometimes they do bad things themselves. Dragon Prince opens with concepts of black and white and gradually shades greyer and greyer as the novel progresses. It isn’t so much that the concepts of “Right” and “Wrong” are in question, but that the question of whether it is sometimes necessary to do what is wrong to accomplish a greater good arises. This is made stark late in the novel when, despite all of his dreams and visions for a better future, Rohan is confronted with his capacity for barbarism while still holding to a dream of a more civilized world.

Much of Dragon Prince is a political dance as, through the first half of the novel, Rohan plays the simpleton to gain concessions from the High Prince Roelstra and cleverly builds advantage for the Desert.

Roelstra, it must be said, is one of the great villains of fantasy literature. His primary concern is power, whether it is exercising it over vassals, coercing others, or acquiring more by devious means, Roelstra is about power and he is not a benevolent ruler. This puts Roelstra in stark contrast with Rohan. Rohan wishes to build peace by law and ultimately change the political power structure of the land, but every step Rohan needs to make he knows that Roelstra will oppose.

This conflict is one of the two primary conflicts of the novel. The second is Rohan’s internal conflict of his desire to be a good man and his growing realization of what he will do to make his world a better place.

One of the more impressive aspects of the novel, besides the parts in between the front and back covers, is the magic system Melanie Rawn developed here. Now, I am not normally one to talk about magic and how it works and how it plays into the novel, but this is fairly inventive. It isn’t called “magic”, but the people with special talents are called Sunrunners. They are able to weave part of their consciousness on the sunlight, communicate over long distances, and use the light of the sun in a variety of other ways. The faradhi are specially trained emissaries to each Princedom and work and serve all over the continent. They report back to Lady Andrade at the Goddess Keep, and with a network of faradhi who can communicate by sunlight, Andrade attempts to manipulate Princes and protect her people and her family.

Dragon Prince is a very strong, powerful, and thrilling debut novel from Melanie Rawn. There is battle, but the beauty of Dragon Prince is in the political scheming at the Rialla and in the goals of Prince Rohan. Power and how it is used is a central concept to Dragon Prince and Melanie Rawn explores it well. This should be considered a must read novel for all fans of fantasy.

One final thing to note is that the trade paper edition of Dragon Prince seems to have done away with the genealogies and extra information I remember fondly from the mass market edition of my youth. I mourn the loss.