Kids are starting to go back to school and my first assignment is to read The Boyz.  I learned that the first four volumes are on ComiXology Unlimited and are also currently on sale on ComiXology for around a dollar an issue. Hopefully I can plow through the books and start binging the series on Amazon by Sunday. 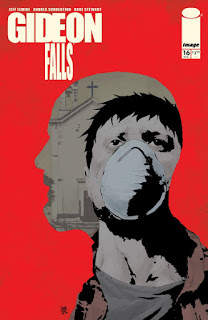 Pick of the Week:
Gideon Falls #16 - Andrea Sorrentino produces some of the most stunning two-page spreads that really immerse you in this creepy and surreal universe that he created with Jeff Lemire. The ending of this issue sets the scene for a showdown that is likely going to leave a lot of people changed. We learn a big secret about Norton Sinclair that has me asking more questions. It turns out that his real name is Daniel and he was taken from his family to Gideon Falls when he was only nine. His dad also investigated the existence of the Black Barn and it is going to see the two of them shed some light on what happened back in the day. This book, from the colors by Dave Stewart, letters by Steve Wands, art from Sorrentino, and story from Lemire is truly a masterpiece and a book that I need to re-read with the most recent development. I always have more questions than answers, but it is a good thing that drives my interest in this series.

The Rest:
Silver Surfer: The Prodigal Sun #1 - Prah'd'gul recalls the story of what caused his exile many years ago. He is a character that reminds me a lot of Star Lord, as he is brash and has powers beyond what you would expect. We learn about an encounter he had with Silver Surfer and Galactus that didn't go as he planned. Surfer hinted that his father was someone other than himself, before besting him and sending him to a different planet to allow Galactus to feast on the world he just landed on. Vowing revenge, Prah'd'gul is saved from his exile by Surfer and is seeking revenge on his brother with the help of Surfer. I have not read a lot of Surfer books in my day, but this was one of the more entertaining I have read.

Star Wars: Target Vader #2 - Since we are in the middle of back to school season this title evokes a much different feeling in my brain.  I have thoughts of tax free weekends, rows of folders, and a savings of 5% with a Red Card.  In this series, the Hidden Hand has put out a hit on Vader and he is well within his power to put an end to it. Beliert Valance, a cyborg, is heading up the team against Vader and he is almost as insane as Vader himself and has no concerns with the collateral damage that occurs when you draw Vader out from the shadows. This has been an entertaining side story, but I am starting to feel that Marvel is watering down the watch Vader kill people who are trying to kill him.