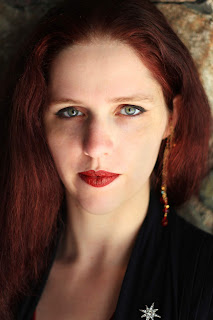 Alexandra Rowland is the author of A CONSPIRACY OF TRUTHS (2018) and A CHOIR OF LIES (forthcoming, September 2019) and, occasionally, a bespoke seamstress under the stern supervision of their feline quality control manager. They hold a degree in world literature, mythology, and folklore from Truman State University, and they host two podcasts, Be the Serpent and Worldbuilding for Masochists. Find them at www.alexandrarowland.net, and on Twitter and Patreon as @_alexrowland.

1. What book are you currently reading?
Oh man, so much of my TBR pile these days is taken up with homework for my podcast! Right now I'm reading one of the fanfics that we're planning on talking about on an upcoming episode (can't tell you which one, no spoilers! ;D), and I'm making my way very slowly through a book of the collected poems of Pablo Neruda, which are of course unspeakably beautiful. Next up on my list is a nonfiction book, Uncommon Grounds: The History of Coffee and How It Transformed Our World by Mark Pendergrast and This is How You Lose the Time War, by Amal El-Mohtar and Max Gladstone.

2. What upcoming book are you really excited about?
The Unspoken Name by AK Larkwood, which comes out next year! It has a super fascinating female main character who starts out as the sacrificial bride of a creepy death god -- I'm only a couple chapters into it, but the descriptions are lush and vibrant, and I'm already really invested in the characters. I've heard it gets super queer :D

3. Is there a book you’re currently itching to re-read?
Good Omens. The miniseries gave me buckets and buckets of nostalgia, and the fandom has really exploded into a Renaissance. The book itself was super formative for me when I was about fifteen, and I really want to revisit it. My copy is battered and dog-eared and very very well-loved, and 15-year-old-me left a couple nearly-faded margin notes in pencil that are now totally indecipherable because I was trying to be as gentle with the book as possible, and that meant extreme brevity. (Self, why did you feel compelled to write merely "!!" beside that paragraph? What was going on in your head??? You could have said more!)

4. How about a book you’ve changed your mind about – either positively or negatively?
I first read The Lost Years of Merlin (TA Barron) when I was about fourteen and I adored it. I tried rereading it again when I was about twenty and was enormously dismayed to find out that it wasn't nearly as good as I remembered. I try not to think about the reread--I want to remember it as that great book from my childhood!

5. What’s one book, which you read as a child or a young adult, that has had a lasting influence on your writing?
Oooh, I don't know if I can pick just one! No matter what, the first and best influence has to be by Diana Wynne Jones. I get a lot of my sensibilities about voice and character from her -- all her secondary characters kind of have their own thing going on, their own complex inner lives, and that's something I think makes a book really rich and interesting. (And, an easter egg: the Chants in my books are named after Christopher Chant from her Chrestomanci series!)

I began reading Terry Pratchett when I was about fifteen (after Good Omens introduced me to his work, as mentioned above) and from him I got philosophy and a good hard look at The Way Humans Are, and an idea of how you can write about both those things in a really forthright way. Pratchett put the idea into my head that characters--even protagonists--can be deeply flawed humans, not always kind, not always brave, not always smart, and that none of those things matter as long as you plant your feet firmly on the side of Doing Good and refuse to budge.

6. And speaking of that, what’s your latest book, and why is it awesome?
WELL. Speaking of characters, voice, philosophy, and doing good, let me tell you about my upcoming book, A Choir of Lies! :D Choir is the sequel-but-you-can-read-them-in-either-order to my debut novel from last year, A Conspiracy of Truths. Conspiracy was a fantasy novel about fake news and the destructive power of stories; Choir is about fantasy tulip mania and the constructive, healing power of stories. It's about trauma and grief and recovery, and it's extremely queer.

Three years ago, Ylfing watched his master-Chant tear a nation apart with nothing but the words on his tongue. Now he's all alone somewhere new, brokenhearted and grieving, but a Chant in his own right. He finds employment as a translator to Sterre de Waeyer, a wealthy merchant of luxury goods, while he struggles to come to terms with what his master did, with the audiences he's been alienated from, and with the stories he can no longer trust himself to tell.

That is, until Ylfing's employer finds out what he is, what he does, and what he knows. At Sterre's command, he begins telling stories once more, fanning the city into a mania for a few shipments of an exotic flower. The prices skyrocket, but when disaster looms—a disaster that only the two of them recognize—Ylfing has to face what he has done and decide who he wants to be: A man who walks away and lets the city shatter, as his master did? Or... something else?

A story can be powerful enough to bring a nation to its knees, certainly. But in the right hands, a story can rebuild a broken dam, keep the floodwaters back, and save a life—or ten thousand lives.
Posted by Paul Weimer at 12:00:00 AM