Microreview [book]: To Be Taught, If Fortunate by Becky Chambers

Science, aliens, and optimism in the face of an overwhelming universe. 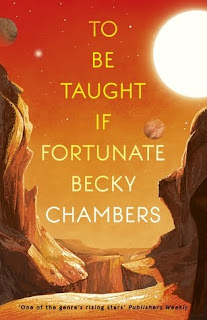 It's hard to know when to pick up a high-concept Becky Chambers book, even one as short as this. On the one hand, To Be Taught, If Fortunate (named after a quote from UN Secretary General Kurt Waldheim's speech on the Golden Record sent with Voyager) is a novella that's being lauded for its big ideas: in particular, the way in which humans might adapt themselves for future interstellar space travel, and that suggests that it's a novella that will require careful attention to get the most out of it. On the other hand, Becky Chambers is an author most known for bringing radical comfort fiction to space, delivering a series in The Wayfarers that rejects ideas of necessary conflict or drama between diverse people while offering some great adventures and characterisation. To Be Taught, If Fortunate definitely delivers on both sides of that equation and requires engagement from its reader at the same time as it offers a fundamentally optimistic outlook in the face of the universe's many challenges.

To Be Taught, If Fortunate focuses on the voyage of four humans, sent to explore a set of four habitable worlds fifteen light-years from earth. The narrator, Ariadne, is the flight engineer for the Lawki 6 mission, part of an ecological survey sent to various exoplanets in the early 22nd century, joined by xenobiologist Elena, geologist Jack, and botanist Chikondi. The novella wastes no time in establishing the context in which Ari's mission has been launched: humans spent most of the 21st century confined to Earth as global problems increased, but never stopped sending probes to explore the wider solar system, and by the time of Ariadne's birth, the fact of life outside that on earth has been well established. The narrative, told in the form of a communication back to earth by Ari, details the crew's mission to each of the planets in the system: icy Aecor, life-rich Miribalis, ocean-covered Opera and extreme, tidally-locked Votum. Although she's not a scientist first, Ari is utterly devoted to the scientific value of the mission and eager to fold in both the technical and scientific elements of the mission to her narrative; it soon becomes clear that the reason she's doing that, and the underlying tension in the book, is the lack of communication from Earth for much of the mission, and the fear that their home planet has lost the ability or the will to respond to their work.

Because of all the science, the novella ends up being slow and almost meditative, and there's plenty of pages which are pure worldbuilding: from the scene-setting history of the first pages to a long discussion of molecular chirality and its implication for the origin of life at the end, there's a lot of descriptive content here, and it's not always obvious what purpose this information is serving. The blurb of the text makes a lot out of one particular technological feature, which are the genomic adaptations the crew undergo at each planet to adapt them to it, from general adaptations like increased radiation tolerance to world-specific changes such as increasing muscle mass on a high gravity world. This idea doesn't go anywhere direct, but it provides a compelling background, albeit one which never explores the ethical complexities behind it, particularly when it comes to the "baseline" corrections almost all of the characters receive - there's a lot of eugenic implications to unpack here which this narrative simply doesn't have the space for. That aside, there's clearly a lot of love and interest that's gone into the scientific elements, which are made narratively relevant by having a protagonist who is equally engaged. I'd suggest that the real highlight here is the weird and wonderful non-sentient life on each planet visited and the writing does a brilliant job of transferring the excitement of the crew with most of their discoveries - be it a garden of otherworldly vertebrates or a confirmation of microscopic life - onto the page and offering it to the reader.

The interpersonal relationships also very much as you'd expect from a Chambers novel, which is to say they're a completely refreshing delight. Because the novella spends its time focused on a small crew, Ari, Jack, Elena and Chikondi all feel fleshed out and nuanced, and Ari narrates the challenges of being in close proximity with just three other humans while being matter-of-fact about how they accept each others' quirks and give each other both the support and space they all need. It's impressive how convincing this claustrophobic group's interactions are, and while I definitely did not come away from it feeling that I would want to hop in a spaceship with three other people for years on end, this nevertheless feels like a very real crew. The elements of connection with Earth and with other missions are brief but also believable.

Even with so many individual ingredients available, I have somewhat mixed feelings about what To Be Taught, If Fortunate adds up to. The overt plot is simple and episodic, as the quartet travel to each planet on their list in turn and then consider their next move in the face of an uncommunicative Earth. Different challenges on each planet affect the group more or less - a "contamination" incident on Miribalis, for example, is given huge weight while it's happening but then doesn't affect anything further, and there's also a lot of tension around the departure from Opera that is resolved as "actually it was all fine". On one level, this constant release of tension from individual incidents is quite nice - no need to worry about Chekov's gun on the mantlepiece, in this universe it's going to stay right where it is. However, it also means that the link between individual incidents and the emotional arc of the novella - as the characters grapple with their place in the universe, without a link to Earth calling them back - is either subtle or non-existent, depending on how generous one feels. The discussion of chirality (whether a molecule is "right handed" or "left handed" and why it matters in biological terms) that almost closes out the novella is a big example of this: on an overt level, the connection between Lawki 6's molecular discovery and their decisions about whether to return to a possibly-dead earth are tenuous, but it adds an interesting data point as the characters consider their position in the universe. There's just so much going on that I found the lack of explicit connections and resolutions to be slightly frustrating, even as the individual elements as delightful as expected.

Ultimately, I suspect that To Be Taught, If Fortunate, is going to delight most of Becky Chamber's existing fans, while probably continuing to confuse anyone who isn't on board with her writing. Regardless of how you feel it adds up, it's a novella that packs a huge punch in a relatively small space, and it certainly delivers on the big ideas in spades without compromising on any of what Chambers' writing is known for. Whether those two elements totally work together will be a matter of personal taste, but there's certainly plenty here to keep a reader thinking.

Penalties: -1 mileage may vary on whether this is more than the sum of its parts