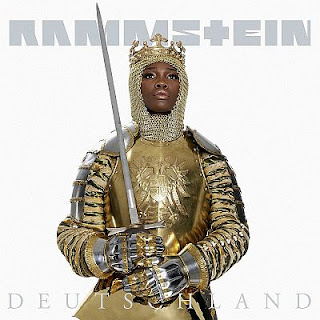 Fortunately, instead of NSFW (or in addition to it, depending on one's coworkers' appetite for concentration camp visuals, cannibalism and kissing severed heads), Rammstein delivered some amazing SFF this spring with their music video Deutschland, the flagship song from their new self-titled album.

Let me argue why the video directed by Specter Berlin is definitely something to enjoy from an SFF perspective (and maybe even consider when filling out the Hugo nomination ballot in the category of Best Dramatic Presentation: Short Form next year so that we could have the first non-English finalist in this category for the first time in 18 years).

Well, depending on one's appetite for a number of things, as the case always is with Rammstein.

For those unfamiliar with the band, it's a musical act from Germany, probably best known for their Du Hast hit which was included in the original Matrix soundtrack back in the 90s. The band has had a long career, though, even if nothing they have published since has done quite as well in global terms. In Europe, however, it is a massive cultural force, seemingly becoming more and more popular even without publishing new music for quite some time now. Their new album has topped the album charts in Germany, Austria, Belgium, Denmark, Finland, France, Netherlands, Norway, Poland, Portugal and Switzerland (in addition to being #2 in Spain and Sweden).

I'm not a huge fan of the band's music per se, but on the other hand I'm not sure that the music is what they have been about for some time now. In interviews, the members often joke about how everything in music has been invented already and they are not skilled enough to play anything else than their style of monotonous, ramming, sample-heavy metal. Their last fifteen years since Reise, Reise came out have been a slow slog towards somewhat more accessible (if at times uninspired) rock while their edgier creative energies have went to dreaming up crazy flame thrower and missile pyrotechnics for their tours. Rammstein gigs are state-of-the-art horror circus, basically like Eurovision song contest with all the songs not about love but hate, perversions and cannibalism with some over-the-top silliness (like keyboardist's treadmill on stage) and sex antics thrown into the mix. On a US tour, performing Bück dich ("Bend down") with the customary slime-throwing dildo skit even got singer Till Lindemann and keyboardist Flake Lorenz arrested.

In addition to the bizarre sex stuff, Rammstein has been in some sort of trouble over their aesthetics and politics for numerous times. They took some heat after using footage from Leni Riefenstahl's Nazi propadanda film in their music video of Depeche Mode cover "Stripped", and some more after it has been reported that fans of theirs have perpetrated a number of violent crimes. Apparently a favorite band of several school shooters and right wing extremists, they even decided to do a song about the fact that, when push comes to shove, they are politically on the left: the chorus of Links-2-3-4 ("Left-2-3-4") states: "They want my heart in the right place, but when I look down, it beats left". Not to be confused with any sort of politically correct or culturally sensitive Anglo-American left, of course. 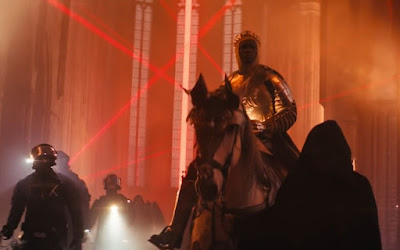 However, it's an open question whether the actual lyrics make any difference when most listeners are not fluent in German. Similarly, the language barrier makes it kosher to casually listen to songs about sadomasochism, abuse, sexual violence, necrophilia, cannibalism and related topics (at least when there are no Germans, Austrians or Swiss people present), so there's a tremendous amount of irony around Rammstein to appreciate.

As far as the Deutschland video is considered, there has been some criticism over the inclusion of concentration camp imagery, but for Rammstein's standards, the song and the video are probably some of the least provocative ones in their disco/videography even if Holocaust is definitely as sensitive a subject as it gets in Germany. In contrast, their previous album's second single (after the X-rated Pussy) Ich tu dir weh ("I want to hurt you") was blacklisted by German officials due to violent content for some time so that the album had to be rereleased without it and only an instrumental version of the song could be played on tour.

This time around, the habitual record publishing controversy is a little more nuanced — and what's better, involves some science fiction.

The song Deutschland itself is a mundane rock anthem discussing the love/hate relationship Germans have with their country and its history for obvious reasons. In the chorus, between rhythmic DEUTSCHLAND chants, the I of the song announces their desire to love and condemn a thing at the same time with a flaming heart.

Lindeman's lyrics are a mishmash of dark, megalomaniac metaphors delivered with ominous rolling r's, which are both his trademarks. It's an extremely catchy song trying very hard to get the listener throw their fist in the air during the chorus, as many characters do on the video, or at least nod their heads during the Deutschland shouts.

Still, the song is probably not of interest for the Nerds of the Feather readers out there. All the science fiction content is found on the visual track of Specter Berlin's video. While the track addresses the nation's dark past on symbolic terms without much in the way of specifics, Berlin's dramatization adds more of them than one can easily digest.

Black actress Ruby Commey plays the part of Germania, the embodied nation who is also a space amazon of some sort, coming from the futuristic space age to unearth or relive the past. With her, we take a tour through German history starting from the wars between the Roman empire and Germanic tribes 2000 years ago, focusing mostly on the violent bits: with jarring synthesizer effects on the background, Germania saws off the head of Till Lindemann's corpse and faces the attacking Roman legionnaries. At this point, the song and the fast forward time jumps really start.

There's guns, dogs, flames, crashing Hindenburg zeppelin, antique cars, prisons, protests, police brutality and V2 rockets taking off until we get to the concentration camp scenes which have caused some controversy in Germany. An SS commander (guitarist Richard Kruspe if I'm not mistaken) executes some of the other Rammstein members while Germania, this time wearing a Nazi uniform and an eye patch, looks on and Lindemann delivers the National Socialist "Deutschland Deutschland über allen" quote for good measure. It's difficult to fault Holocaust survivors' criticisms about it, but to be fair, the camp is only a part of a tapestry of violent events taking place in the German history and leaving that out would have been quite odd considering what the song is about.

Later, Baader-Meinhof Group gunmen from the violent 70s exchange fire with police and the monks burning Germania's body at stake meet and greet NSDAP goons burning books in the 30s until we get to the more apocalyptic visions. Concentration camp prisoners, knights, riot police and laser guns from space take part in the same epic fight scene and Germania in transformed into an mechanical angel, gives birth to puppies and is shot into space in a casket.

Your guess is as good as mine as to what the hell it is supposed to mean (if it is in fact supposed to mean anything) but I rather enjoy the mind blowing collage and insane production values.

Some of the elements are swipes from previous Rammstein videos. The band crawling on all fours towards the camera is also seen on Mein Teil and the casket holding Germania's body is quite similar to the one in which midgets place Snow White after she OD's in the video of Sonne — and the a piano version of the song is also heard during credits. Not to mention Till Lindemann's flame-throwing angel wings he uses when performing Engel. Recognizing these easter eggs is not necessary for enjoying the ride, though.

All in all, Deutschland lives up to the Rammstein motto of "Do you own thing — and then overdo it!" For anybody who read this far, I heartily recommend watching the video below.

(Apparently, the video cannot be embedded here — you have to sign in to YouTube to verify your age and conform that you really really want to see it. So, heres a link.)

Bonuses: +1 for overall craziness and production values
Penalties: -1 for the song being probably not that good (even if it's way better than the horrible Pussy), -1 for shock aesthetic getting inflated eventually
Nerd Coefficient: 9/10 – "Very high quality/standout in its category"
***