In contrast with the MCU's cowardice, the DCEU has no problem portraying America as the bad guy 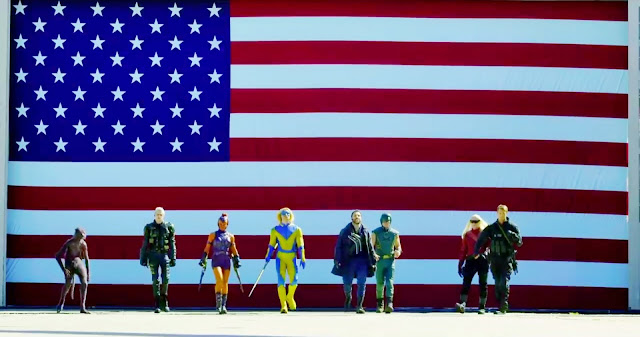 It took a second try and years of waiting, but we finally got a decent Suicide Squad movie.

To summarize: when the brutal dictator of the fictional banana republic of Corto Maltese is violently overthrown by another, equally brutal dictator, but which happens to be aligned in opposition to the US, a sinister agency of the US government created to do the dirty work in secret drags members of the incarcerated population into service (a comic-book fantasy exaggeration of a practice that is, by the way, still fully legal). However, their mission is not to kill the new dictator, but to prevent him from getting his hands on dangerous alien research that had been kept hidden in Corto Maltese for sketchy reasons having to do with exiled Nazis and good old US image management. The attempt at foreign intervention goes horribly wrong, and our Suicide Squad has to choose what it wants the US to stand for.

The criticism of American foreign policy is refreshingly overt here. This same year, The Falcon and the Winter Soldier excelled in tortuous mental gymnastics to find a way to maybe imply, in a subtle, roundabout manner, that influencing world politics by force might, perhaps, have iffy effects, to then hasten to clarify that no offense was meant to any general watching the show.

WB's answer to that? Hear Bloodsport tell it to Peacemaker:

"I think liberty is just your excuse to do whatever you want."

I'm no fan of wrestlers in cinema, but John Cena brings his best big brute game to the role of the Peacemaker, openly defined by the director as a caricature of American heroism, a sentient moral contradiction that would happily murder for the cause of peace. This character does more than provide easy jokes: he's the embodiment of why si vis pacem para bellum is a repugnant stance. His unthinking commitment to putting the country's reputation above issues of human rights or historical memory is just one of the many jabs at macho posturing one can find in this movie (along with the brilliant casting choice of hiring the actor whose career is essentially defined by Rambo to play a beast who prowls the jungle eating enemy soldiers one by one).

Over against the hypermasculine icon of the American soldier single-gunnedly fixing the world, The Suicide Squad offers a moral alternative in the collective force of those who have been despised or ignored, symbolized here by a swarm of hungry rats, but explained in a helpful flashback as a metaphor for the lofty purpose that every one of us can aspire to. Crucially, it is not men and their guns who defeat the final boss monster of the movie, but women and their sense of responsibility: Harley Quinn fulfilling a promise to the Javelin, the Ratcatcher carrying on her father's principles.

Speaking of fathers, there is a curious choice of theme running through The Suicide Squad. The standard by which the movie separates good from bad characters is how they treat children. Time after time, the script judges a character by this criterion. We know the Peacemaker is a monster because he'd be willing to kill children for his precious ideals; likewise, Amanda Waller is established as a monster because she threatens to throw a minor into the deadliest prison in the country for a minor theft. Colonel Flag decides to go against his superiors and expose their dirty secrets when he learns they were responsible for unethical experimentation on children. Harley Quinn almost marries a bloodthirsty tyrant who is drawn toward her symbolic anti-system status (a move that mirrors the unholy love affair between American progressives and Third World dictators), but draws the line at the execution of children.

Once one notices this theme, it's striking how strongly it constitutes the moral axis of the story. Polka Dot Man, Bloodsport and Peacemaker were abused as children, and their respective ways of processing that trauma defines their characters. Polka Dot Man channels his anger via delusion. Bloodsport prefers to stay away from his daughter to avoid being a negative presence, but steps up to protect her the instant she's in danger. And in a brief but meaningful shot, Peacemaker lets us see that he doesn't disapprove of the horrific mistreatment he received from his father.

Finally, the legacy that persists of the American presence in Corto Maltese is the not-quite-dead Weasel, a serial killer of children, set on the loose.

Ratcatcher is the only cast member with a healthy parental relationship. It's the love her father gave her as a child that equips her with the tools to save the day. First, she saves her own team, when her compassion defuses the threat presented by traveling with King Shark. And at the end, she saves the world while explicitly renouncing American interventionism.

The problem with movies about American interventionism resembles the problem with war movies in general, in that it's hard to criticize the thing without somehow also exalting the thing. The Suicide Squad takes care to tell us very clearly where it stands. Casting Rambo as a man-eating monster is one way. But the choice of Panama as the location to film this tale of catastrophe is loaded with symbolic resonance. As it happens, the US launched a widely condemned military invasion of Panama in 1989, presumably to remove its dictator, but the operation also had to do with preserving American control over the Canal Zone. Urban warfare destroyed entire city blocks and displaced thousands of Panamanians. The legacy of this damage persists today.

Aware of the weight of this thematic link, The Suicide Squad introduces a second theme, one of generational responsibility. If we've established that those who hurt children are the bad guys, what should be our response? In its final moments, the movie no longer filters this issue through individual characters, but through the imagery of the collective. The symbolic point of the story when the treatment of this theme begins is marked by the sudden appearance of rain, which Harley Quinn interprets as charged with erotic meaning. A dirty joke early in the movie had already foreshadowed the notion of Corto Maltese as a land full of fertile potential. What is at stake is the lives of millions.

Starro the Conqueror is one extreme of this moral question. It weaponizes its own offspring to the point that they are referred to as extensions of itself, tools with which it builds a population of mindless servants. The Ratcatcher is the opposite extreme. She also relies on the strength of the collective, but she respects her army of neglected creatures. She didn't come to Corto Maltese to conquer it; she's every bit the herald of freedom that the Peacemaker only pretends to be (note that her signature weapon resembles a torch held aloft).

The Suicide Squad, WB's reinvention/reboot/relaunch/redress of its disastrous, similarly-named 2016 title, is a much more competently produced film that fully earns its The that marks it as The movie adaptation of the DC Comics supervillain team that people will choose to remember. Director James Gunn has succeeded at course correction for the DCEU (sorry, the Serververse) with a version of the Suicide Squad that is everything its predecessor failed to be: dark but not tedious, fast-paced but not confusing, hyper-violent but not juvenile, graphic but not off-putting, ridiculous but not annoying. In short, a movie one can be entertained by. That's all we were asking for. But it's also a conscious dissection of the damage caused by American military interventions, a solidly researched topic that should not be treated as shocking or controversial, as Marvel has been doing. Point awarded to WB on this one.

Bonuses: +1 for somehow making a cannibalistic shark a funny concept, +1 for juggling an overcrowded cast without confusing the viewer, +1 for fluid action choreography.

Penalties: −1 for underutilizing Peter Capaldi, −2 for inconsistent Spanish (there are oddities of word choice, but the most salient problem is that, for a Caribbean island, Corto Maltese somehow manages to have a dictator with an Argentinean accent and a guerrilla leader with a Brazilian accent).