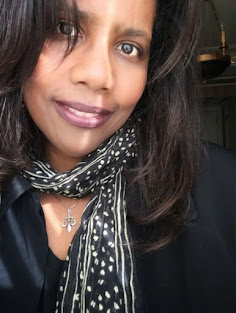 It is with great joy that I welcome journalist Lynell George to Nerds of a Feather.  Her book A Handful of Earth, A Handful of Sky: The World of Octavia E. Butler (Angel City Press 2020) is a Hugo nominee for best related work.  George is a Los Angeles based essayist and journalist who was able to meet Butler at a number of book-ish events over the years.  A Handful of Earth, A Handful of Sky was born out of George's time spent with Butler's archives at the Huntington Library in San Marino, California, and explores how Butler thought about the world, and how she shaped herself.

Of science fiction, Butler once said it was "a handful of earth, a handful of sky, and everything in between."  Using photos of Butler's ephemera, A Handful of Earth, a Handful of Sky allows the reader a glimpse into the every day world of a very private writer, for example how Butler found inspiration in daily mundane things like riding public transportation and hearing snippets of stranger's conversations.  A must-read for fans of Butler's work, anyone interested in how a writer gets from "here" to "there", how a writer shapes who they want themselves to be, will be interested in this book.

George's articles and essays have most recently appeared in the L.A. Times, LMU Magazine, High Country News, and LAist, and she is the author of No Crystal Stair: African Americans in the City of Angels and After/Image: Los Angeles Outside the Frame.  She is the recipient of a 2020 Distinguished Journalist award and has won a Grammy.  You can learn more about George at her website, Lynellgeorge.com.   She was kind enough to answer all my questions about her four year journey writing A Handful of Earth, a Handful of Sky,  what surprised her along the way, and more.

NOAF: Welcome to Nerds of a Feather, can you tell us a little about yourself?

Lynell George: I am a writer. I’m a longtime journalist by profession and have covered a wide range of beats —arts and culture, literature, social issues, human behavior and hard news. I grew up as a curious reader. I still am today. I was born and raised in Los Angeles. NOAF: Congratulations on your Hugo nomination for A Handful of Earth, A Handful of Sky. What inspired you to write this book? LG: Thank you very much. After spending many hours in Butler archive at the Huntington Library in San Marino, California, I became very interested in Butler’s daily routine and rituals. Everyone’s creative life looks different. There are no set rules and I was fascinated by how Butler began, so very early, to sketch out what it would look like to have a creative life. She planted the seeds very early, just dreaming on the page. She worked with what she had. Humble objects: Hand-me-down books, repurposed journals, recycled scrap paper. She haunted the library for riches. I found it extremely inspiring. NOAF: In 2016, you participated in a project celebrating Octavia E. Butler called Radio Imagination, organized through the Los Angeles arts nonprofit Clockshop. Your submission was “Free and Clear”, a posthumous interview with Butler. What's the connection between “Free and Clear” and A Handful of Earth, a Handful of Sky? LG: “Free and Clear” was a jumping off point for me. With that piece, I stitched together Butler’s own words to create a first-person narrative. Part of her writing ritual was asking herself questions that time, or research, or a conversation with someone might answer. Some questions became more complex over time. Some questions haunted her and she’d ask them everyday. So I looked at those patterns and questions in her daily life – what she wrote down in those diaries and journals and on her calendars—and looked at the ways in which she attempted to answer them.
I decided that the shape that the “posthumous interview” should take would not be me, the journalist, asking questions, but Butler asking and responding her own queries, considering her own themes, talking out loud. The road to A Handful of Earth, A Handful of Sky branched off from “Free and Clear” because I could still “hear” Butler talking about the daily rituals– the new questions and new answers she’d involve herself in day after day in the books she was writing.
“Free and Clear” allowed me to hear how her mind worked. Being inside another writer’s process, in such a vivid way, was complicated. And visceral. I carried her worries, regrets, curiosities and joys with me. I knew I wasn’t finished with Butler. I knew that I wasn’t after a biography; Gerry Canavan’s had just come out with his deep dive into her life and work and I as aware that there were biographies in the pipeline. Instead, I was very interested in a very particular sliver in her path toward “self creation.” The archive gives you a sense of her day-to-day rituals, how much he had to struggle through to find the space to even begin to write.
A Handful of Earth, A Handful of Sky was a way to visually chart the process of her writing life. What tools did she need? What did she touch everyday? Her notebooks, her journal, her bus pass, her library card… Each chapter takes one of those objects to tell the story of her routines, rituals, roadblocks, repeated affirmations that gave her the focus she needed to become. Writing for a living isn’t simply about what happens on the page. It is about how you arrange your life, the ingredients you need to do so. It’s about drive and commitment. it’s It would be helpful to anyone who was attempting not just a creative life, but attempting something unusual or difficult. 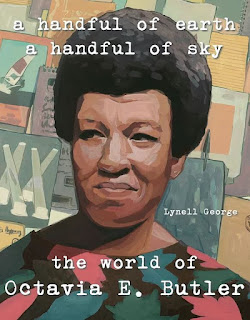 NOAF: How long did it take you to write A Handful of Earth, a Handful of Sky? What was going through your mind while you were researching and writing the book? LG: I spent about four-plus years in the archive and began the first writing back in 2019, then finished up a draft in the summer of 2020. During the early research, I was just trying to get a sense of the archive, which is quite large: About 400 boxes of materials that include her drafts, diaries, newspaper clippings, and datebooks. You get a real sense of a writer’s life and the attending obsessions. It was familiar and also very specific to Butler. As I moved through, I was often aware that this experience— although I was “in conversation” —was nothing like “interviewing” someone. In a certain way I was walking with her through her day, looking over her shoulder as she paid her bills, read the newspaper or coaxed herself through another draft of a short story. NOAF: Your read your way through the Octavia E. Butler archive at Huntington Library. What was the most interesting thing you came across while you were going through the archive?
LG: So much. So hard to pinpoint. But one thing that struck me was her photography—he landscapes and streetscapes in particular. Some of it was to help her in her own research and enable her to be detailed in her descriptions of place. (She drew maps as well.) I wanted to know more about the images and would like to go back and spend more time looking at that work. She had an interest and a talent in photography. It was something, at one point, she considered as an alternative career path. NOAF: What do you hope readers will get out of A Handful of Earth, a Handful of Sky? LG: That there isn’t really anything “romantic” about a writer’s life, though movies and books sometimes tell you otherwise. It’s tough, tough work. Everyday it means staring down your fears and your demons. As Butler said, writing meant being alone with your thoughts – all of them. She didn’t put a lot of stock in “inspiration”, she believed more in habit. Relied on it. Sitting in the chair and writing the sentence and the next sentence. Getting it out of your head and on the page. I hope it will demystify the process and remind people that there are good days and harder days. Keep going.NOAF: Octavia E. Butler spent most of her adult life in Pasadena CA, and you have lived in and around Pasadena and Los Angeles. Did you ever get a chance to meet her? What was she like?
LG:  She lived in Pasadena and then later, after college years, in the city of L.A. I used to see her at her book signings at bookstores. She didn’t read text at these events, she’d talk about her books and the process of writing them and would be open to questions. She was always kind and generous with her time. The last time I saw her, she gave the keynote at the “Black to the Future Festival” in Seattle. I had hoped to see her again to interview, but that didn’t happen. She died just a couple of years later. NOAF: Who are some of your favorite writers and artists? Why does their work speak to you? LG: I love this question because I read different people and different forms for different moods or feelings. When I was just starting as a journalist and just beginning to write about race and hierarchies I gravitated to James Baldwin’s nonfiction. He helped me understand precisely what an urgent reported and personally observed essay could do. I learned how to think on the page with his work. I love Toni Morrison. She was one of the people my mother revered and was inspired by. In copies of her books I still find my mother’s notes about memories that a particular passage of a novel unlocked in my mother’s memory.
I reread Gwendolyn Brooks’ gorgeous novella “Maud Martha” before I started writing A Handful of Earth, A Handful of Sky. It was the sort of mood that I wanted to be drifting in as I was writing, sitting with someone through their good days and bad days. I’m also inspired by photographers, like Roy DeCarava and Dawoud Bey, who take us deep into the intimacies of Black life. More private, over-the-shoulder moments that show us grit and grace. Music too: So much music, too much to name. But sometimes, I’ll put on something to transport myself to another time and place, to let the walls, floors and ceilings fall away.
NOAF: Thank you so much for taking the time to talk with me.
POSTED BY: Andrea Johnson lives in Michigan with her husband and too many books. She can be found on twitter, @redhead5318 , where she posts about books, food, and assorted nerdery.
Posted by Andrea Johnson at 12:00:00 AM