The sequel to the classic 80s cartoon fixes its main problem: its protagonist 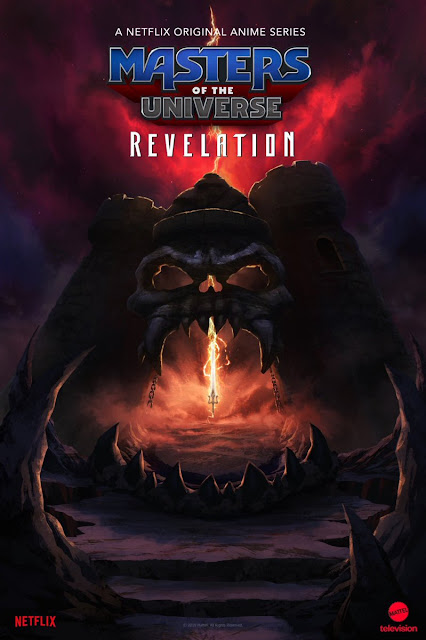 When your character is defined plainly as "the most powerful man in the universe," there's no such thing as narrative stakes. In any episode of the classic He-Man show, which ran from 1983 to 1985, there's never any question that the hero will win. He's beyond Superman syndrome, beyond Dragon Ball syndrome: he simply can't be beaten. Whereas Superman syndrome was addressed early in his stories with the addition of kryptonite, and Dragon Ball syndrome can be temporarily patched with yet another escalation, He-Man syndrome has no solution. He's essentially Space Jesus. He's morphed beyond a character and into a flat fact of the universe: He-Man always wins, period. Which is why, if Kevin Smith wanted to tell a He-Man story that would be interesting to the trope-savvy audiences of the 21st century, He-Man had to go. Not fully, and not permanently, of course: as Smith himself has stated, Mattel Television would never retire such a lucrative character. But this first season of Masters of the Universe: Revelation, with He-Man out of the picture, provides a valuable opportunity to explore many questions that his huge shadow had hidden: What is it like to live as ordinary people in Eternia? Why is it a place worth defending? And who are these people who would choose to shun ordinary lives and fight for Eternia?

There's a reason why its sister show, She-Ra and the Princesses of Power, ended up when it did: just after She-Ra has become an unstoppable and undefeatable warrior. The reason is a technical one which has to do with the fundamentals of the Western storytelling tradition. The core engine of narration in the Western canon is the tension between a character who has a desire and some factor in the world that opposes that desire. How the protagonist resolves that tension (or not) is how a story emerges. There's no more story to tell once your protagonist has everything they want. The Good Place had to end when its characters made it to heaven. After Puella Magi Madoka Magica turned Madoka into a goddess, the only way to produce a sequel was to lift another character to a demonic role to dethrone her.

With He-Man, who can lift mountains and punch moons, the only way to keep producing hundreds of episodes was within an 80s-style episodic format: the villain conceives some harebrained conquest plan, the hero stops it, the end. There's nowhere for the story to grow beyond this status quo where He-Man is always already the guaranteed victor. In the 80s, this narrative prison cell matched well with an audience that wasn't so overstimulated as today's and didn't know to demand a more exciting format. Even though the new series was conceived for the same viewers who were kids in the 80s, you can't tell 80s-style He-Man stories today. Sensibilities have shifted too much. Classic worldbuilding elements like "This guy and only this guy is the chosen hero" have evolved into "Who did the choosing, and according to which standard, and in the service of which interest?" (see The Matrix Reloaded). Established conventions like "These characters are here to be the hero's supporters" now prompt the question "How did that hierarchy emerge, and why don't they get to have lives and interests of their own?" (see every Robin ever). Epic missions like "Let's defend the royal palace" have turned into "Why do we even have royalty?" (see Thor: Ragnarok).

My favorite moment of Masters of the Universe: Revelation is in the first episode, when newly knighted Teela boldly says no in the king's face. The speech that follows is a great critique of the classic He-Man status quo. For years, Adam and his supporters let Teela fight side by side with them, but they never thought she could be trusted with the truth of what she was risking her life for. The stated reason for the secrecy is a command given by a prince to a soldier as a matter of political safety, but it intruded into the intimate realm of what a father could tell his daughter, so the fairness and legitimacy of that command deserved to be questioned. The king reacts in anger toward the soldier who lied to him about his son, but not toward the wife who did the same (and whose betrayal ought to hurt more). All these details reveal a set of power dynamics that the original show would never have acknowledged. Of the sizable cast of He-Man, Teela is the perfect choice to be the character who challenges those conventions. Instead of secrecy, this season runs with a repeated motif of "I'll go where you go," where burdens are shared and trust is based on openness.

This shouldn't have been controversial. Supergirl spent two entire seasons questioning the wisdom of Kara's choice to keep her secret from Lena, who clearly was on her side and risked her life on a daily basis for her. In Masters of the Universe: Revelation, we watch Teela free from the constraints of chivalry and monarchy, struggling to build a meaningful life that doesn't revolve around her service to He-Man.

With no more Castle Grayskull to fight over, Eternia becomes a less simple place. Factions are no longer as clearly defined as they used to be. Evil-Lyn recognizes that she shares with the Sorceress the goal to preserve the magic of the world. Beast Man is willing to go against former fellow villains to protect Evil-Lyn. Man-At-Arms is no longer defined by his political allegiance, but by his chosen family. So instead of unchangeable alignments in rigid opposition, we have community and cooperation.

Finally, there's Adam, who nevertheless remains the main hero of the show. He has Paradise. He has eternity. What more story is there to tell about him? It is to Smith's credit that he gives Adam a believable reason to give up the blissful afterlife: enough people have died for his sake. Classic He-Man never showed a character dying, or even a sword being used as a sword, because children's television was run by puritans, but the truth is that a life of war damages even its survivors. There's an emotional honesty at the center of this show that puts to shame the original's nonchalance about perpetual war. The fact that Adam's return to the living world doesn't result in a restoration of the status quo (which, frankly, would have been a boring erasure of all the themes of the season), but instead leaves us with an overpowered Skeletor and a weakened Adam, promises to make season 2 even more interesting. As an ordinary mortal, Adam can show us what makes him heroic when he doesn't have infinite power at hand. The final episode establishes that champions go to Paradise, but mortals go to dust. So Adam doesn't even have the prospect of everlasting reward for his coming challenges, and he doesn't have the assured victory he always had. This is the first time he'll have to face a battle he might lose. What will make it worth for him to keep fighting?

As you may have heard, this readjustment of the stakes didn't sit well with a segment of the fandom. You know which segment: the same that couldn't handle an all-woman Ghostbusters, felt betrayed by Luke Skywalker in The Last Jedi, and lost their heads because Lola Bunny is no longer voluptuous. The segment whose opinion only has weight in the conversation because it's loud, not because it's well informed. The segment that demands every beloved franchise stays the same or else their childhood will be ruined. The segment that claims to uphold He-Man as an icon of traditional masculinity while completely missing the mountains of queer subtext in the original cartoon. This new round of outrage is even less articulate than the previous ones. Self-proclaimed "true fans" are making nonsensical arguments that fail to grasp the basics of narrative. A perfect character can't sustain a compelling story. A fatal flaw in the Narnia books is that you enter the plot knowing Aslan shall win, which removes all the tension. Bible fanfiction only becomes exciting with a twist like Milton's choice to make Satan the focus character. Likewise, an updated He-Man series couldn't hope to be an engaging story if it kept, like the original, its Space Jesus intact. This is a very simple principle of the crafting of adventure fiction, and it's exhausting to have to hear the furious complaints from those who don't get it. Now Skeletor is Master of the Universe. Now Adam is powerless and injured. Now that's worth paying attention to. We finally have stakes to care about.

Nevermind that Adam will in all likelihood end up regaining his powers: this time he'll have a journey to get there instead of just being handed a magic sword. Kevin Smith is doing the franchise an enormous favor that should be recognized. He-Man is no longer the static epic of an invincible warrior. It's no longer a childish power fantasy. Now it's the tale of a relatable human struggle.

Bonuses: +1 for sharp dialogue, +1 for Griffin Newman's heartfelt voice acting as Orko, +1 for the soundtrack.

Penalties: −1 for being too short and not showing us Teela's journey to the present point, −1 for not giving Andra sufficient development, −1 for oversimplifying Beast Man's character.