Microreview [book]: A Psalm for the Wild-Built by Becky Chambers

A cozy walk through the woods with Socratic dialogue over tea 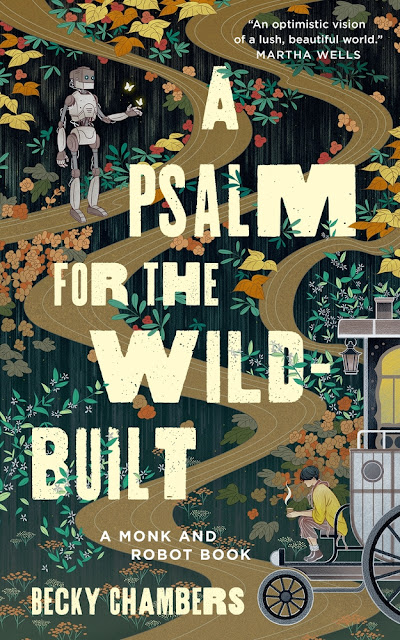 In the moon Panga, which orbits the planet Motan, humans lived and worked and burned oil and built factories and used robots. One day, the robots gained consciousness. They declared independence and walked away.

Humans deindustrialized their way of life so as to not need to build factories or robots again. Nothing is wasted. Nothing is treated as disposable. Biopolymers have replaced metals and plastics as the main construction material. Use of resources is managed so responsibly that human settlements have retreated from half of Panga. The rest is allowed to rewild.

Humans have developed a religion that worships abstract concepts: the Parent Gods of cyclical processes, inanimate matter, and physical laws; and the Children Gods of things made, things unknown, and things comforting. Our protagonist is Dex, an agender monk in the service of the god of comforts, and their newly found calling is to travel from town to town to set up a table, pour tea, and listen to people.

No one has seen a robot in centuries.

A Psalm for the Wild-Built is a title that instantly brings to mind A Canticle for Leibowitz, a massively influential novel that also deals with religious life in a post-industrial society. However, unlike in the Leibowitz classic, instead of digging up relics from the technological era with the aim of reviving it, the humans of Panga are content with living within their means. There's no hint of greed or inequality in this world. Material needs are met. Nature is respected. No one uses others for their own gain.

So, the robots ask: what do humans need?

The book takes its time to reach this question. We spend the first third following Dex as they learn the ropes of tea service, a pursuit sparked by a sudden, unexplainable urge to hear the call of crickets. But crickets are gone from the human lands, and people can get exhausting at times, so Dex embarks on an ill-advised solo journey into the wilderness. And that's where they meet Mosscap, a robot that has volunteered to serve as emissary to the humans.

(I say a robot that, and not a robot who, because robots in this world object to being treated as people. They're emphatic about their status as objects.)

The gradual buildup of trust and finally closeness between the human and the robot is the emotional engine of this book, and it runs smoothly, without a bump along the road. Becky Chambers knows how to narrate troubled feelings and unconfessed yearnings and conflicted priorities and secret shames. It's amazing that we finish this book knowing so little about Dex's backstory but so much about who they are. By the perennial writing principle that choices reveal character, Dex reveals theirs with every step they take. And who they are is a fundamentally good person, but hungry for purpose. They have sworn their life to giving comfort to people, but for some reason, yet to be explored and processed, they haven't found comfort in serving. This is communicated to the reader without the pitfalls of many emotional journeys. In the short span of a book of this size, every plot point has to matter. Chambers makes every choice of Dex contribute some significance to our picture of this character. Just like in the Pangan society, nothing is wasted.

Unfortunately, Chambers needs to insert some extremely unlikely backstory for the story to happen at all. When the robots declare independence, the humans just let them go, and stop using robots. No one in the whole world seems to object, no one attempts to maintain control, no one causes trouble. Of course, letting conscious beings choose their own fate is the obviously correct ethical answer, but have you met humans? This plot point misses the hard truth that social life is made of disagreement. Likewise, once the robots are independent, they collectively decide that they will allow their bodies to break apart and cease to function so they can be reused in building new individuals, instead of seeking after immortality. And not a single robot appears to be opposed to that. No dissident voice emerges. No robot is trying to change its society's rules. That is simply not believable.

What I'm saying is the revolution is way too easy in this world.

These plot points would never seriously happen. But without them, we can't have this story. So we're stuck with a fantasy where societies politely choose a common path and everyone is pleased with it. To digest the philosophical content of the book, we have to accept that fantasy. Since we're reading fiction anyway, there's sufficient leeway as to how much the reader is willing to deviate from accepted reality, but it hurts the prospects for the applicability of the book's message. And this is so very much a book with a message.

The central theme analyzed in A Psalm for the Wild-Built is that of use. The protagonists refer to it as purpose, but use allows for a broader discussion of the entire story. It all starts when tools become aware and refuse to be used; humans earn their redemption, and civilization is solved, when they stop using sentient beings and become more careful about how they use inanimate nature. One can notice at certain points in the story a line of argument in opposition to a puritanical strain of environmentalism that is squeamish about using resources. This book replies: there's no avoiding getting your hands dirty. Don't pretend that human life doesn't use resources. Rather, be aware of what and how and why you're using. Panga has abandoned planned obsolescence, so daily objects are designed to last, but not so that they cannot be reused when they break. In a key scene, Dex visits an abandoned factory built in the old industrial age, and laments that its inert walls and machines still remain, its materials unusable by the wildlife.

The initial difficulty in Dex's relationship with Mosscap is that the robot keeps offering help with physical tasks, and the human feels guilty about accepting that help. Dex doesn't want to use Mosscap, and it takes Mosscap several rounds of dialogue to make Dex understand that voluntary cooperation is different from exploitation. Dex has, perhaps unwittingly, accepted an absolutist standard that prevents them from interacting meaningfully with the world. They hesitate to take water from a stream even though it's the same stream that supplies the village where they last drank. They dread the thought of leaving the road for fear of disturbing the forest, as if one stroll were the equivalent of a fleet of steamrollers. Their debates with Mosscap about the ethics of use nudge them, and aim to nudge the reader, toward a less idealist stance. You're going to need to use resources anyway, and feeling sanctimonious about it helps no one. What you need is not purity, but honesty of intention.

But the most consequential realization in the story is about Dex's relationship to themself. They're feeling lost, unsatisfied with life. Mosscap's lesson for Dex is that one of the cruelest things you can do to yourself is to define your worth by your use. If you give other sentient beings enough respect that you refrain from using them, you must also have enough respect for yourself that your life aspirations do not revolve around how you can be used. Or, rephrased from a different perspective: time is a finite resource, but still, you don't have to feel squeamish about how you choose to use it. With both the use of nature and the use of time, you're going to make choices. So own those choices.

Although in the end I disagreed with portions of the book's message, it succeeded at challenging me to give it serious consideration. Going into A Psalm for the Wild-Built can be deeply confusing for a reader educated in Enlightenment values. The modern mind is trained to classify, to standardize, to generalize, to apply broad brushstrokes so as to keep categories down to a manageable number. This book rejects that mindset, and the unlikely place where I finally saw what alternative was being offered is the scene when Dex takes notice of the difficulty of walking on untouched nature as opposed to a flat road:

"With every step, there were dozens of variants, and with each step after, the rules changed yet again."

Now apply the good old road-as-life-journey metaphor to this passage, and you'll see what I mean. Dex has literally gone off the beaten path, so they have to shed their previous assumptions. This brief description in the text illustrates an entire mode of thinking that is opposed to reductionism and focuses on particular situations in particular circumstances. It relates our standardized industrial civilization to the war for dominance over nature and, ultimately, every system of oppression. In its stead, Chambers proposes a form of degrowth. You can notice this same mode of thinking in contemporary social movements formed around local self-governance, situated knowledge, share economies, and anti-globalization. This is all very punk, but the plot of the book happens in a future time when the complete replacement of social structures has already succeeded. There's no more exploitation, of nature or of people; moreover, there's no more conceptual opposition between nature and people. If you've ever wondered what the world looks like after "the system" is overthrown, this is it.

This is the first book in a series. Maybe that's why the story doesn't reach a proper conclusion here. At the end, Dex does find the crickets, and I'm reminded of the comedy cliché where the sound of crickets indicates that nothing is happening. Certainly, this is a book where nothing much happens for page after page, but that is not a problem. This never aspires to be an action adventure. This is a book of ideas placed on a stage to be confronted and tested. And to examine important ideas, sometimes you need to take a break and hear the crickets.

Bonuses: +1 for beautifully detailed descriptions, +2 for skillful weaving of philosophical questions into ordinary slice of life scenes, +1 for a great sense of humor.

Penalties: −1 for ending the book at a strange place without actually completing the story, −1 for socially improbable worldbuilding, −3 for several philosophical points that come close to anti-humanism.