It's like the producers watched the first two DCEU entries and said, "OK, let's do that, but let's also give it heart" 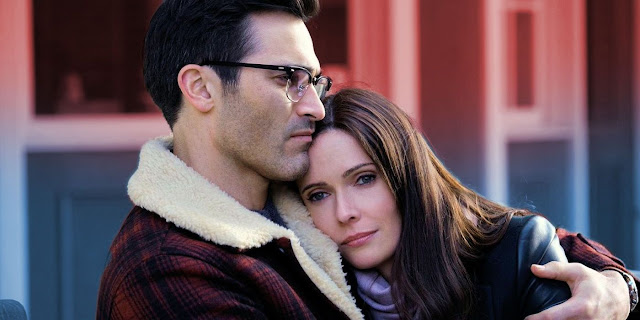 As the latest addition to the already sizable Arrowverse, Superman & Lois jumped deep into the themes of family and community in its first season. The plot gets moving fast: the Kents move to Clark's childhood town after the death of his mother, and soon he has to deal with his son gaining superpowers, his old friends having money problems, his father-in-law not knowing how to separate work from family, and his wife losing her job. And that's just the first two episodes. By the end of the season, Smallville has rampant unemployment, Clark has learned of a lost Kryptonian half-brother who wants to body-snatch his town, and his wife has just met the daughter she had in another universe.

One can forgive the producers for not making Clark cope also with the fact that his cousin has been stranded in the Phantom Zone for months. That's fine. His plate is full enough as it is. And this season apparently had an even more important mission than probing into Clark's convoluted family issues: it also repeats the plots of Man of Steel and Batman v. Superman: Objectivist Boogaloo, and fixes what's wrong with them.

On one hand, we have a Kryptonian conqueror who plans to use an archive of Kryptonian heritage to transform Earth into a new version of his world. On the other hand, we have an armored fighter with fancy gadgets who is convinced that Superman is dangerous, so he embarks on a mission to kill him. These parallels are overt and intentional. Basically, the Arrowverse is telling the Snyderverse, I see what you were trying to do, but let me show you how you should have done it.

In BvS, Lex Luthor manipulates Superman's public image so that Batman will feel motivated to kill him. But it shouldn't be that easy to fool Batman. The destruction that befell Metropolis in the previous movie was Superman's responsibility, but in no way his intention. He committed, of course, a fault of omission in not steering the fight elsewhere, but it was literally his first day as a full-grown superhero, and in the end he got rid of the invading Kryptonians. Since then, he's done nothing but good deeds. Batman may feel sour on a personal level because of his injured employees, which is understandable, but he doesn't have a defensible excuse to hunt down Superman. All he has is distorted news and a weird dream. The deaths in Nairomi and the bombing of the Senate ought to have alerted the instincts of the world's supposedly greatest detective. If we're going to go with the explanation that Batman always needs to be prepared for every threat, that gets us to the point where he makes a kryptonite blade, not to the point where he decides it's time to use it. In short, there's no solid reason for Batman to be doing this.

In S&L, John Irons has every legitimate reason to believe his suspicions are correct. He doesn't have probabilities; he has facts. The Superman of his world has in fact killed thousands, and the show intelligently timed the moment of his final confrontation with our Superman to match with the moment when Superman is brainwashed to be evil. There is a believable risk that he may destroy the world, so this time, his hunter does have a justification for bringing the kryptonite.

In both versions of this plot, it is the weight of Superman's human connections that gives the killer pause. However, in BvS, the Martha moment couldn't have been handled more ineptly. Learning that Superman was raised by humans shouldn't suddenly change Batman's assessment of the threat. In S&L, the tension applies to both sides of the fight: Lois needs to convince Irons that Superman can be rescued, but once she does that, Irons still needs to get Superman to shake off his brainwashing. This is what BvS was going for, but it failed because it ignored that it takes two to tango. Batman was trying to kill a Superman who had no intention to destroy the world. Making our heroes bash each other in the head for an hour over a misunderstanding that could have been fixed by talking makes our heroes look rather incompetent. Instead, S&L has Superman convince Irons of his good intentions early in the season, then it makes Irons learn of Superman's human connections, then it makes Superman turn actually evil and throw the first punch, and only then it makes Irons wrestle with the choice to kill him or not.

To make the point even more obvious, the very first thing S&L does in the very first episode is kill Martha. Memo to Snyder: forget about Martha. When you make superheroes disagree to the point of fighting, have the fight be resolved by heavier considerations than unresolved mommy issues.

So we have a Kryptonian invader with a plan to replace all humans with his own people, and Superman isn't enough to defeat him, because they're equally strong. How does Superman win?

Not so fast, says Superman & Lois, because the enemy is possessing the body of Superman's son.

Gosh, I love it when a story goes out of its way to deny the hero an easy loophole to use violence.

Once again, what saves the day is human connection, and once again, it's Lois who gets it done. The moment of Jordan's salvation, ultimately triggered by his brother's love, establishes a curious parallel with the situation between Superman and his evil brother. Earlier in the season, Jonathan utters a powerful line that forces his grandfather to reconsider his choices: I'd never be afraid of my own family. This is the power of humanity that is lacking in Tal-Rho. It is the power that saves Jordan, and the power that Superman attempts to use to bring his brother to his side. Unfortunately, Tal-Rho is beyond the help of this kind of connection. His father's corrupting influence did too much damage. He needs to be kept away from anyone he could harm. And still, he doesn't have to be killed.

The manner of defeat of Tal-Rho serves to explain why S&L decided to redo BvS before redoing MoS. Superman cannot beat Tal-Rho on his own, but he has access to the weapons John Irons was going to use to beat Superman. In a way, this mirrors how, in BvS, Batman's spear proves useful against Doomsday, but it also provides a solution to the Zod problem in MoS. Part of the reason why the moral question in MoS is so contrived is that the plot forces Superman to fight alone. But Zod is not a local problem of Metropolis; he plans to destroy the whole planet. If we accept the Snyderverse as a whole, Zod arrives in an Earth where, at the very least, Aquaman and Wonder Woman already exist. Either MoS should have used an enemy whose reach didn't extend beyond Superman, or Superman shouldn't have had to fight alone.

This exposes a key problem with Zack Snyder's treatment of Superman: it assumes a world-ending threat is Superman's business instead of everyone's business. This is in line with his individualistic ethos for the character. Jonathan Kent in MoS is the worst version of Jonathan Kent ever, but let's not forget the atrocious advice Martha Kent gives in BvS. It is a gigantic lie to say that Superman doesn't owe the world anything.

Third correction: who is Superman?

Clark Kent in the Snyderverse is baffled that people would be wary of his immense power. Clark Kent in the Arrowverse exerts constant self-control, because he can put himself in other people's shoes.

You say you want to #RestoretheSnyderverse? Superman & Lois already did it. It may not have a blockbuster-sized budget, but it has heart. That, in the end, is what makes or breaks a story.

Bonuses: +1 for fixing the ugly cape attachments Superman wore in the Supergirl series, +1 for giving Jonathan an interesting arc despite having the greatest risk of having nothing to do, +1 for clever mirroring of the brotherhood theme.

Penalties: −2 for telling a story nominally in the Arrowverse but effectively in isolation from the Arrowverse (for example, the Fortress of Solitude looks nothing like the one in Supergirl).