Cage of Souls by  Adrian Tchaikovsky takes the skills of the prolific author of a variety of subgenres and turns them to one new to him: Dying Earth Science fantasy. 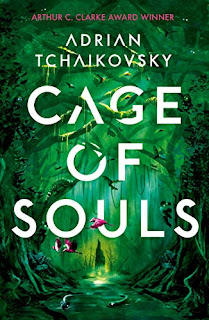 The city of Shadrapar has a problem. First, it is, as far as anyone knows, the very last city on a dying planet Earth. The sun is not doing well, lashing out with increased heat and radiation, the world outside the ancient, last city of man is a riot of evolving plants, creatures and who knows what else. The city is a mausoleum aborning, the waiting room for the end of the human race. And yet people strive for power, authority and just scramble to survive day by day.

When the city sends academic Stefan Aventi to a prison colony island for a crime he did commit, however, it sets in motion not only the story of Stefan Aventi for the reader, but a series of events that will leave both the prison and the city transformed, forever.

This is the story of  Adrian Tchaikovsky’s Cage of Souls.

One thing I really appreciate about the work of  Tchaikovsky is that, in his endless fecundity and ability to produce novels and stories fast or faster than I can read them, he tries not only new subgenres, but also new styles and techniques and frames and other devices as well. This can also mean that some of his invention doesn’t always work quite as well as it might have if he had stuck to more familiar paths for him.

Here in Cage of Souls, Stefan Aventi’s story is different than many of his other works in a couple of respects.  First, it is told in a  testimonial first person point of view from the point of view of an academic. This consequently means we are told the story in a somewhat discursive style. We start with Stefan’s trip to and arrival on the Island, and while we get the immediate details of that he has been sent there, why he has been precisely sent there, what he did to deserve (if anyone can be said to deserve) that exile only gets eventually told. The present day narrative of Stefan relating his time on the island is punctuated occasionally by him talking about his previous life.

There are, though, two major discursions where we break the narrative of the present entirely and plunge ourselves into Stefan’s present. Tchaikovsky is clever and showing how this is an uinspooling of memory and testimony can be an organic process and not in a simple linear narrative. The first of these discursions brings from the past to an early part of Stefan’s history, revealing just what he did and why it is such a threat to the city, although it is only a portion of Stefan’s backstory and does not close the loop. Closing the loop on how Stefan came to undergo his exile takes the second great discursion, and that shows us the Underworld, the underbelly of the city.

This is a novel that while it has some interesting and weird fauna, it is a very peopled novel, and it is the characters and our narrator’s often fumbling and deliberately wrong perceptions of people, for all that he is an intelligent academic, he can be amazingly clueless, that this novel runs on and with¹. It is Stefan being dumped into the society of prisoners and wardens on the Island and the existential terror of that and the bonds he forges, that runs a lot of the novel. In the back matter, his upbringing and his growth into a person, and the major thing he has done, is less rich in character and more rich in idea, in one of the central conceits of the novel. In some ways, then, this section, while giving Stefan a lot of interior character development, is somewhat running against the novel’s strengths.

The second section, however, where Stefan goes to the Underworld, is in many ways for me the richest and best and most interesting part of the novel. More than Shadrapar itself, or the vicious and dangerous jungles, or the Prisoner and Warden society of the Island, it is the Underworld, I think, where all the powers of what the author is doing in terms of character, invention and worldbuilding. We get to see Stefan as a fish out of water in a place not quite as perilously dangerous as the Island, but pretty close. But we also get a more complicated environment, and more complicated social network than what we see on the Island.

We also get, as I think about The Underworld, my favorite minor character in the novel, and that is Sergei. Sergei, it turns out when he reveals his backstory to Stefan, is not from Shadrapar, not from the jungles of the dying earth, but from somewhere else *entirely*. His story, in miniature, from the beginning to the end is a masterpiece and I felt a real kinship with him. A novel from his point of view of the events we see would have been *real* interesting. Greygori, the Transforming Man, a man who is changing himself to make a better form, is also intriguing, especially when Sergei gives him another name, a name that Stefan won’t know but we, the reader, might certainly recognize.

The Underworld section, then, really exemplifies as mentioned above, the characters of this novel, the characters that will stick with me. Greygori and Sergei, and Stefan himself, obviously, but also Peter, the chess playing warden. Trethowan, dead author of a work that the academic Stefan quite literally clings to for life. Thelwel, who is not who and what he appears. The dangerous governor of the Island and the cruel, capricious and even more dangerous Lady Ellera, the so called Witch Queen.Gaki, the prisoner who might take Stefan’s knowledge and ideas to dangerous ends.

In the end, Cage of Souls keeps many of the strengths of the author’s writing, put into a framework, and discursive style that is sometimes at odds with his subject matter, although I always do in the end appreciate a book that thinks and considers about how a story is being told and to whom and why. The final secret of this novel, and maybe its capstone, if not its point, is how and why Stefan, academic exiled to the Island, came to be writing this testament in the first place.

¹Interestingly, a character who our narrator dismisses, later on reads the account we ourselves are reading, and gives the narrator a lot of grief for it. It does make one reevaluate a lot of the other character

Bonuses : +1 For an intriguing dive into yet another subgenre for this prolific author.

+1 for an interesting set of characters and their relationships.

Penalties: -1 The stylistic and writing differences between this and much of the author’s  other work make this a not great place to start with the author. This book is atypical, for ill as well as good