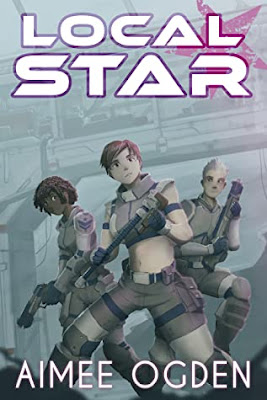 Executive Summary: Triz is a guttergirl, an engineer who has risen from living in the uninhabitable sewers of her space station to having a stable job at the wrenchworks and a steady romantic relationship with Casne, a decorated war hero, and Casne's wife Nantha. Unfortunately, while out for drinks (and trying to avoid Kalo, Casne's fellow soldier and Triz's ex) Casne is arrested for a war crime she almost certainly didn't commit, and Triz is sure that this must be the work of the Cyberbionautic Alliance, a transhumanist terrorist force. Triz needs to prove Casne's innocence, a challenge which will push her well past her usual limits... and, of course, it'll involve teaming up with that pesky Kalo and confronting a few difficult truths about Triz's world and her place in it.

Assessment: On the surface, Local Star is a fast-paced, action packed adventure, full of conspiracies and twists and satisfyingly tropey scenes: Bonding with a gruff but ultimately (maybe) OK mechanic mentor! Horrible futuristic bureaucracies! Jailbreaks! Journeys through space station trash chutes! Zero Gravity Shenanigans! Near-death fakeouts! Within that adventure are a lot of satisfying trials and challenges that add depth to Triz and her world. The space station setting is comfortably familiar for the genre, but with enough flourishes of its own worldbuilding to make it feel distinctive, and Triz's marginalised upbringing and precarious current position gives us a unique perspective on its society, even as we see her move through the same spaces as Casne and her friends with little difficulty. The Cyberbionautic Alliance, or CeeBees, are a plausible, slightly two dimensional adversary force, but what makes them engaging is Triz's own prejudices against almost any form of cyborg body modification as a result of their existence. That's a challenging prejudice to hold when one of your girlfriends is trans and most of your friends are in the military and prone to serious injuries that require advanced prosthetics, and over the course of the novella we see her worldview evolve to something less absolute.

The novella's blurb and marketing puts polyamory at the centre of its description, and the different character relationships - particularly Triz, Casne and Nantha and Casne's parents, who are in a quad marriage - do a lot of work in relatively little space to show us how this works in practice, and what romance and family look like in a world where polyamory is the norm. As an orphan "guttergirl" who owes her current position to Casne's family (her position at the wrenchworks involves working with Casne's meanest and least emotionally open parent), Triz is constantly aware of the power inequalities between herself and Casne and Nantha, who had more privileged upbringings and went to the same flight school before they knew her, entering their shared romantic relationship with a bunch of history and shared experience that Triz is left out of. Instead of glossing over this dynamic, we are made aware that the characters ideally want to form a quad like Casne's parents, with a fourth person who would shift the balance of the relationship. That all of the characters approach this with openness and acceptance makes Local Star's romance elements really pleasant to read, and while Triz and Kalo's dynamic starts off painfully awkward, their bickering soon smooths into a fun adversarial dynamic - complete with a lot of learning about the others' background that apparently didn't happen during their first fling. I struggled to get a sense of what Triz and Kalo's first relationship would have been like just from their dynamic here, but their adventures together make the eventual end pairing a satisfying conclusion.

Local Star is a romp of a novella, and as such it offers few outright surprises, but its conspiratorial, mystery elements very much work as intended and it deploys its tropes very well. More than that, it's a great example of balancing effective worldbuilding, character beats and an action packed plot at a tasty novella length. Definitely one for sci fi romance fans to look out for!