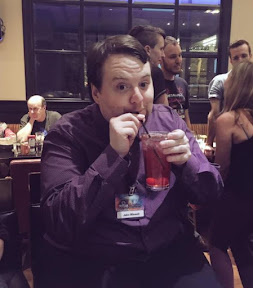 It's been a great year for author John Wiswell.  A first-time nominee, his Hugo nominated short story "Open House on Haunted Hill" won the Nebula and is a Locus and World Fantasy Award finalist.

The title of the short story makes you think you're going to get a haunted house story. And the house is, sort of haunted. More so, it's lonely. The house wants a family to love. And it wants to be loved by a family.  Having recently been in the housing market myself, I've walked through plenty of houses that were in need of love. But none of them called to me the the way 133 Poisonwood Ave calls to Ana and her dad.  Don't get me wrong, I love a haunted house story, but what I love more is stories like "Open House on Haunted Hill". I've read more than enough stores about families in search of a home, and stories about people who love things.  Give me more warn hearted stories about homes in search of a family, things who communicate their love in the only ways they have, and parents whose hearts go supernova and break at the same time as they watch their children.

John Wiswell has been publishing short fiction and non fiction essays since 2015 and his work has appeared in Nature Magazine, Uncanny Magazine, Weird Tales, Fireside Magazine, Daily Science Fiction, Flash Fiction Online, Cast of Wonders, and elsewhere. To give you an ideal of his recent output, in 2020 he had over a dozen peices published and will have over a dozen pieces published in 2021.   You can learn more about Wiswell and his fiction at  his blog The Bathroom Monologues, or by following him on twitter where he is @Wisell.

Have you read "Open House on Haunted Hill" yet?  if not, I'll see you back here in ten minutes for the interview.

NOAF: Congratulations on your Hugo nomination (and Nebula win!) for "Open House on Haunted Hill"! I love that this story is about a lonely house that's looking for a family. Where did you get the idea for this story?

John Wiswell: This story was actually originally hyperbole. I love Horror; I read it, watch it, and play it almost every week. But I seldom actually write it because my disposition and creative processes skew in other directions. I eat darkness, and then spit out rainbows. I was trying to explain this to some friends at the World Fantasy Convention in Baltimore, and gave the absurd example, "If I tried to write about a haunted house, it’d be a story about a haunted house that’s lonely and just wants someone to live in it."

My problem was that the writers around me loved this idea and begged me to write it. After enough of them encouraged me, I figured I’d try on the train ride home. Little did I know what it would turn into.

NOAF: As readers, we get to see just the edge of this beautiful relationship between boisterous Ana and her father. It's got to be tough for her dad, every time he looks at Ana I'm sure he sees her mother. What can you tell us about how you developed their characters – Dad with the podcast and Ana who is looking for ghosts?

JW: As soon as I realized my house would be courting a family, I knew there would be a dad. I feel there aren’t enough fathers who deeply care about parenting in SFF. We could use a hundred more Alan Grants, as it were. Luckily, the dad came with free character traits. Him being exhausted emotionally and physically were natural to his circumstance, and his skepticism felt equally natural as a counterpoint to the house. He was very obliging to me, as a character. He became what I needed almost as readily as he tried to become what Ana needed.

NOAF: “Open House on Haunted Hill” won the Nebula for best short story. What went through your mind when you learned you had won the Nebula?

JW: I learned the moment that the host read the title and my name. I’m grateful that I had a few seconds off-camera before they put me on the stream, because my eyes were bugging out of my head. Stories revolving around this kind of warm heartedness can be tough to publish, and don’t often win awards. And the magazine that took the chance publishing "Open House on Haunted Hill," Diabolical Plots, had never had a story nominated for a Nebula before. So it all felt impossible to me until I had to give the speech and thank everyone. In those ensuing minutes, I felt I had touched the community in the way it had touched me. I needed to thank them for it. I hope that came across in the speech.

NOAF: How excited are you to be nominated for the Hugo?

JW: It was my first Nebula nomination, and it’s also my first Hugo nomination. So, it all feels pretty unreal. I keep thinking, "You’re not famous enough to be nominated for that." But the Hugo voters really cared about this house and this family. It warms my heart. It’s encouraged me to keep writing more stories like this and "Tank!" and "Silhouette Against Armageddon" and "8-Bit Free Will."

NOAF: When you're working on a short story, how do you know it's “done”? How do you know you're done tweaking the story and it's ready to be submitted to magazines for publication?

JW: It’s always at least two drafts. Sometimes it’s many more. But what tells me it doesn’t need another?

If I love reading the opening out loud, that’s the first check. It can make me laugh. Or it can convince me that, if I were reading it for the first time, I’d have to read on to find out more. But it has to elicit a strong reaction.

And when I sit down with the entire draft and read it through, if I feel it goes across a proper arc, that’s another check. It can be a story about a theme, or a personal growth arc, or something else, but the backbone of the arc has to be there. Nothing needs to get in the way of that arc. If it’s done, then I’ve cut everything that interrupts that. In my head, as I read, I can usually tell if it’s a smooth arc.

The final check is whether I love how it ends. I don’t have to love everything in the arc. But that ending better pay something off for me.

If it does all that, then it’s off to the markets! I’m finishing some new shorts as of this interview. Hopefully you’ll get to read them soon.

NOAF: You've published short fiction steadily since 2015. What have you learned along the way? Are there things you've learned about what editors are looking for or how to hone your craft in a specific way?

JW: The most important thing I learned about editors is they want different things. PodCastle is more likely to give a chance to a funny story. Strange Horizons is a good home for queer stories. You pick those sorts of things up by reading magazines for years. And I think that kind of reading is why I love writing – I love contributing to the body of stories out there. It lets you know what’s been done to death, or maybe even what’s popular but that you’d like to subvert around. SFF short fiction is partially conversations within communities. If you feel lost, you can reorient yourself by asking what you’d like to say to the community.

What else have I learned?

Well, rejection doesn’t matter that much. Your story can be rejected at any phase of submission for a thousand different reasons that are out of your control. What matters is if you’ll keep submitting your stories everywhere you can, and if you’ll keep writing new stories and honing your craft. That’s what you have control of.

Keeping a list of every story, character, and theme idea you have is wise. If you ever feel like you don’t have anything to write, dive into that list and build something.

NOAF: What are some of your favorite themes and/or ideas to write about?

JW: The easiest way to make me care about fiction is to make your character care about somebody else. 133 Poisonwood Avenue wants people to love, and the father loves his daughter. Frodo or Samwise going alone to Mt. Doom would not be as compelling; you’re crying because they made it to that horrible place together. So I’m drawn to writing about what people can do for each other. Sometimes it’s about rescuing someone, but there are even more stories about how we support, uplift, and enable each other to grow.

Also I clearly have a thing for humanizing monsters. Blame it on my childhood of rooting for Skeletor, Captain Hook, and Jason Voorhees. At this point I’ve written about a sympathetic haunted house, an angry skeleton, a tentacle monster, a werewolf, an alien invader (*and* an alien robot), a demigod, an utahraptor, a civilization of body-warping parasites, videogame monsters, and a literal tank. Soon I’ll have a novelette in Uncanny Magazine, "That Story Isn’t The Story," from the point of view of a familiar. Some other time I should tell you about the monstrous novel I’m writing…!

Though you can also see those stories as various explorations of being othered. I’m disabled, and certainly "Tank!" has some allegories for disabled experiences in there. I’m also ace/aro, and looking at love in different ways definitely comes through in a lot of my work. It’s cathartic to take a character who is expected to act violently, or otherwise whose existence is viewed as undesirable, and twist them. To have those characters instead behave completely opposite to the dominant culture’s expectations. Or just to set them at an angle, and let them explore why the culture is trying to push them into a certain niche.

NOAF: Who are some of your favorite writers, and why is their work important to you?

JW: It’s hard to overstate the importance of people like Douglas Adams, Terry Pratchett, Rumiko Takahashi, Tom Holt, and Ursula Vernon in keeping humorous SFF vibrant. Oh, and God bless Rumiko Takahashi for doing so many dozens of weird riffs on love and how it malfunctions; I feel like she was a guiding light to me as I started sussing out how I felt about love myself. Inu Yasha, Ranma ½, and Urusei Yatsura all wound up very meaningful to me.

Related to that, authors like Martha Wells and Vina Jie-Min Prasad have been pillars of normalizing warmhearted fiction; their stories that aren’t necessarily about humor, but are about compassion and kindness feeding directly into their plots and themes. Murderbot is easily one of my favorite book series for just that reason. Prasad is also one of my favorite active short story writers, among Kelly Link, Ted Chiang, P.H. Lee, and Merc Fenn Wolfmoor. I could talk about great short stories all day.

I’m also a huge sucker for writers who do very deep dives into their characters’ lives and histories, and how their complicated contexts affect their unique roles in plots. Gillian Flynn, Stephen King, John Ajvide Lindqvist, and Caitlin Kiernan are some favorites. Oh, and everyone was shaken by R.F. Kuang’s The Poppy War, right?

NOAF: It's been like two years since I read The Poppy War and I am still recovering from that book! John, thank you so much for this interview. With what's all on the horizon for you, you are just. Getting. Started.