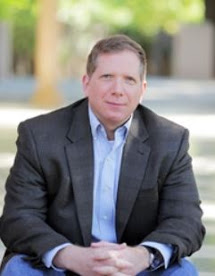 As I was reading the promotional blurb for David Liss's new novel The Peculiarities, everything sounded fairly straight forward (for supernatural sci-fantasy values of straight forward) until I got to the phrase "leaves are sprouting on Thomas's skin".  And with those six words I was hooked, and immediately emailed Mr. Liss's publicist and requested an interview. The Peculiarities hits bookstore shelves on Sept 7, and promises an absurdist romp through through Victorian London, where Thomas seeks a magical cure to his ailment. . . while saving the family business, avoiding supernatural murderers, and following proper etiquette.  Historical fiction, comedy, surrealism, body horror, and that cover?  I. am. intrigued!

Liss is known for his historical fiction thrillers and novellas for adults, his Randoms series for middle grade readers, and a number of comics project including Black  Panther, Mystery Men, The Shadow Now, Angelica Tomorrow, and The Spider.  His first novel, A Conspiracy of Paper (2000), won the Edgar award for best first novel and the MacAvity award for best first mystery novel, and Liss has been publishing ever since.  You can learn more about Liss and his work at his website, davidliss.com

Liss was kind enough to indulge my curiousity about the man who grew leafier.

NOAF: A young man stuck in a tedious job contracts an illness that makes leaves sprout from his skin. I have to say, you had me at “grows leafier”. What can you tell us about your new novel The Peculiarities?

David Liss: For most of my life, I've been interested in historical magic, by which I mean magic as it was actually practiced by people who truly believed – or at least hoped – what they were doing was working. Specifically, I've been interested in the Hermetic Order of the Golden Dawn, which was an organization that emerged in the late 19th century, during a time when many people believed science had nearly reached its pinnacle, and everything had already been learned or would be learned soon. I find it fascinating that in this world that imagines science as triumphant, you have a group of mostly white, mostly male, mostly affluent people – that is to say, people who benefit most from the illusion of global progress – wanting to see beyond scientific truth. On top of that, they develop a school of magic which, for pretty much the first time in human history, is supposed to be widely accessible. Magicians had always hidden and obfuscated their secrets. The Golden Dawn wanted to spread the knowledge and the ability to obtain it.

I've long been interested in writing a novel about Golden Dawn magicians. The Peculiarities includes a number of real historical people, but it takes place in an alternate world in which Golden Dawn magic works, and the fact that it works is new. In other words, something has changed during the late 19th century and the world, for reasons unknown at the beginning of the novel, has become a much more magical place.

This is a very long answer, so maybe a shorter one would be that The Peculiarities is about a young man whose family hates him and who is turning into a tree. After a great deal of thought, he decides maybe he should try to do something about that. It also includes scary rabbits. 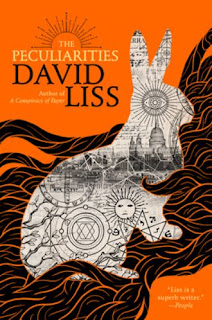 NOAF: What are the “Elegants”? Such a beautiful word, but I have a feeling the answer is going to be scary.
DL: The magic in this novel is mostly based on the magic people believed they could really perform, so it is fairly low key. No one is shooting energy bolts from their hands to teleporting from place to place. On the other hand, there are some bizarre transformations and manifestations happening all around London. One of these is the Elegants, a well-dressed, monstrous couple who wander around the city murdering people and cutting out their organs. They are generally believed to be responsible for the crimes previously attributed to Jack the Ripper.

NOAF:  The Peculiarities is a historical fantasy, filled with magical ailments, supernatural creatures, and a few real people. What research did you do for this novel? During your research, did you come across anything especially unexpected?

DL: I did a great deal of reading about the Golden Dawn as well as organizations and movements that preceded it, such as the Rosicrucians and Helena Blavatsky's Theosophical Society. On top of that, I read biographies of Golden Dawn members as well as their own writings, if they had any. I think the thing that surprised me most was the relative gender equity of the Golden Dawn. The formal leadership was all male, but unlike the traditional English club, with which the organization seemed to have a lot in common, women were members and often the informal intellectual leaders.

NOAF: Which scene in The Peculiarities was your favorite to write?

DL: When I was planning this novel, I had a lot of fun coming up with the bizarre creatures, curses, transformation, and circumstances that I wanted to inhabit the world, but the truth is I love writing the character scenes the most. The moments I most looked forward to writing were when characters have interesting conflicts or make important discoveries about themselves or those around them. I was surprised by how much I enjoyed writing the real-world magician Aleister Crowley, who, in my research, often came across as unpleasantly arrogant and self-absorbed. Yet it turned out that writing someone so arrogant and self-absorbed was super fun.

All of this came together in a scene where Thomas, my protagonist, is dragged by Crowley to a brothel that specializes in women horribly transformed by the Peculiarities. While he's there he encounters some people from his past, and he learns shocking information about his family. Any time I can combine big character moments, emotional impact, and fish-women in a single scene, I'm happy.

NOAF: You mentioned on twitter that you studied and dissected Anne Perry's books to understand why they worked so well. What was the most interesting thing you discovered during that process?

DL: In our culture, we often praise certain kinds of successful people – like entrepreneurs or athletes – for working hard, but we expect creatives to be inspired geniuses who simply "know" how to produce great art. The first time I tried to write a novel, in my early 20s, I discovered it was hard and concluded that I wasn't cut out to be a writer. When I tried again, about ten years later, I'd come to understand that writing was primarily about craft. There must be some native talent, like in music or the visual arts (two fields in which I have zero native talent), but that "feel" for the medium is really just the first step. After that is all about understanding the form, the reason why certain kinds of characters or plots or styles work or don’t work.

Once you peek behind the curtain and see how and why fiction works, it's still really, really hard, but at least you know how to try to proceed. Stumbling with the lights on beats stumbling in the dark.

NOAF: Your award winning debut novel, A Conspiracy of Paper, was published in 2000. How have your writing habits changed (if at all) since then? Has your view of the publishing world changed since then?

DL: I don't know that my habits have changed all that much. I still work five days a week – more if I'm trying to finish something or a project has a lot of energy. The only real difference is that I've leaned into the fact that I'm a morning person. I wake up most days between four and five a.m. and get to work immediately. My creativity shuts down a little bit after around noon, so I tend to try to get as much done as possible in the early morning and save the rest of the day for research or side projects.

NOAF: You've written historical fantasies and thrillers, science fiction adventures, YA, comics, and horror. What so far has been your favorite type of fictional world to play in?

DL: Oh, man. You can't ask me that. Honestly, I like it all. I mentioned earlier that what I really enjoy is writing strong character moments, and you can and should do those in any genre or story-telling medium. I definitely love the kinds of weird and wonderful elements you can add into the mix in genre stories and comics, but I don't feel like I need those elements to have a good time once the writing starts. I think those things are more fun when it's in the planning stage. And part of what I enjoy about my career is the variety. When my first book was in the production pipeline, my agent and editor were pushing me to immediately begin work on a sequel, but I was afraid if I did that, it would be harder for me to break out and write other kinds of things. I feel fortunate that I've been able to get away with experimenting as much as I have.

NOAF: What books and or short stories have you read lately that you really enjoyed?

DL: My favorite genre is what I like to call "messed up people further messing up their already messed up lives." Two books I recently read that fit the bill are The New Me by Halle Butler and Earthlings by Sayaka Murata. I also love old-school style space opera, and I'm currently reading and enjoying Empire of Silence by Christopher Ruocchio. On the non-fiction side, if I'm not doing research, I love issue-based books with a first-person element. I've recently read and loved On the Clock by Emily Guendelsberger and Culture Warlords by Talia Lavin.

NOAF: Thank you so much David!