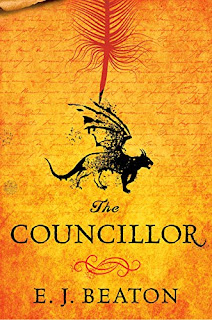 Lysande Prior has a problem. She’s a scholar, and a good one, having been rescued from an orphanage by Queen Sarelin Brey, the Iron Queen, and is the Queen’s closest confidant. Lysande may be lowborn and the nobles of Elira and the nobles of the other city states of the kingdom may consider her beneath them, but she is trained, skilled, well read and is actually writing a book on monarchy and rulership, An Ideal Queen.

When Queen Sarelin is killed, or more accurate to say,  murdered, Lysande’s world is turned upside down. The succession plan for such a result is for someone designed as a caretaker figure to assemble the heads of the other cities of the kingdom and to choose among them to be the successor. This Councillor, always a noble in past instances, has a hard job especially, because with the murder of the Queen, the primary suspects ARE the heads of the city states who want to succeed her. The Councillor might well be seating the murderer of a Queen as the next Queen. And then there is the threat of Mea Tacitus, the White Queen, the greatest enemy of Elira. Whoever is to be the next ruler of the Kingdom will have to deal with her and in the meantime the Councillor does.  It is a thankless and possibly dangerous job. The stinger in the tail ,though, is that the Queen’s instructions for who she wants her Councillor to be is none other than Lysande herself.

And so Lysande Prior, improbably, becomes The Councillor, a fantasy novel by E J Beaton.

The novel presents and fronts itself as a Machiavellian fantasy, and having a character who is writing a treatise like The Prince certainly plays right into that idea from the get go. Lysande is not quite an expy of Machiavelli in all ways, in terms of class and upbringing, in terms of gender she certainly is not him. But her literacy, her interest in governance and the uses and structures of governance, in her interest in keeping her land free from outside forces seeking to overwhelm it, and her keen mind definitely live up to the Machiavellian mold. She’s relatively young and inexperienced in practice, a scholar rather than a political player. Beaton excellently shows the multiple edges of this--she is not used to this courtly intrigue, many underestimate her, but she learns better and learns from her mistakes and becomes a better political operator as the novel progresses.

That plotting and mystery and intrigue are the heart of the novel. It’s a classic setup in many ways, Lysande is a fish out of water, a scholar catapulted to Councillor and having to deal with the heads of the other city states of the Kingdom, trying to discharge her duty, deal with the fact that her lover and friend the Queen is murdered, and that she is very likely supping, and not with a long spoon, with the person behind the death. The novel takes us out of the city on a tour of the kingdom, visiting other cities of the Kingdom in turn, further adding to that unease for Lysande as we wind up on the home turf of other city state rulers.

A word about those other city stage rulers. While Lysande is the only POV character in the novel and its bright pole of character development, exposition and point of view, the other characters are well diversely represented and described as well. The first of these is Luca, the Prince of Fontaine. He is the character, even more than the other rulers, is the one that feels like he stepped out of the Italian Renaissance. Scheming, dangerous, sensual, surprising, and a survivor of many assassination attempts, this makes him an interesting foil for Lysande, and also a partner, and also a rival, and also a dark mirror. Their relationship is the heart of the book, and in lesser hands, that would be it and it would be enough. Beaton takes care though with the other rulers and sets up a relationship map of connections between them, positive and negative. Lysande is thrust into this web, and her attempts to make sense and make connections (and being aware one of them may be the person behind Sarelin’s death) is rich for character drama throughout the novel. I particularly liked the “mismatch” pairing where Lysande, the scholar, tries to forge a relationship with the ferocious Cassia, the Irriqui, leader of the city state of Pyrrha. Cassia is as dangerous and seductive as the jungles of her homeland, and like Luca, is a strong pole for the reader’s attention in the novel. Dante and Jale round out the city state rulers whom Lysande must deal with, but they do not come off quite as brightly as Cassia and Luca do. However,  there is an early and interesting set piece in the novel, where Lysande has all of the city state rulers fight in the arena. The ways each of them deals with their foes is a strong example of character building by action for all of them.

It’s a rich world and the tapestry of the world is richly described. This goes to action sequences (such as the aforementioned duels), to life in the city, the travels between the various cities of the Kingdom, and much more. If Beaton’s goal was to make me think of Italy and my trip there, she succeeded in spades, as the novel evoked Tivoli in particular in a way that few novels have. The writer’s immersive and emotive style, bringing all the senses to the experience of a place for our point of view character, puts us firmly in the world. The Kingdom, too, as a world, is a complicated and diverse place (I wish there was a map though and it honestly could use one IMHO), the various city states are of diverse cultures, societies and terrains that make the kingdom a bit of a jigsaw puzzle of a nation. The tensions between those parts are a constant theme of the novel, but it is a tension not only born of character, but of geography as well. Still, this is the kind of writing and world where I do wish I could visit with a camera, because there are such spectacular locations to visit and immerse yourself within.

And there is magic. This is not only a world that had had magical creatures (Chimeras) once upon a time, but there are magicians, now, and they are, in Elira, an underclass at best, and actively hunted and killed, at worst. The aforementioned Mea Tacitus is a magician and has a host of magicians at her call, making her an even greater and more serious threat to the Kingdom. The nature and status of magicians within Elira as being feared when not hunted and persecuted is a minor theme of the novel that grows as events progress.

One thing I don’t see so much in the publicity matter of the novel but really should be emphasized and highlighted is that this is not solely a novel of political maneuverings and skullduggery, even though there is plenty of that in spades. This is a very sensual, intense novel that dives into Lysande as a character on a number of levels. She is an addict of a hard to find substance made from creatures thought long extinct, and this chimera scale and Lysande’s use of it reminds me of the movie DUNE and the juice of Sappho used by Mentats. Lysande is hardly a logic-only focused Mentat, however.  This is a queernorm world, gloriously so, and Lysande is not only bisexual, she is a very sexual creature, and her passions and desires definitely help drive the plot as well as the action. Her attraction to Prince Luca is obvious, but it is clear she was a lover of the Queen, and has lovers or potential lovers throughout the novel. All of this sensuality, like the descriptions of landscapes and places mentioned before, is richly textured and described. It’s a lush book, in the best of ways, and it immerses you not only in the place, but in the body and feelings and lusts and desires of Lysande as well.

The novel ends at a decent ending point but it is clear there is at least one more novel set with these characters and this world. The resolution does feel a little contrived to me, and could have been set up better, I think. At least, I think the political resolution could. There is a personal resolution, a couple of them, for the heroine, and those set her in an interesting new equilibrium from which she will be able to go forward in a successor volume. I for one welcome a return to this world.

For more on E J Beaton, see her Six Books interview here at Nerds of a Feather.
---

Bonuses : +1 for an interesting queernorm world with rich characters and plotting

+1 for excellent and immersive writing, from dialogue to worldbuilding