Novella Files: The Necessity of Stars by E. Catherine Tobler 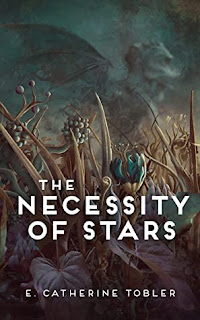 The appearance of the alien Tura in the shadows of Bréone’s garden raises new questions about the world’s decline. Perhaps, together, Tura and Bréone will find a way forward… if only Bréone can remember it. (From Goodreads)

Assessment: The Necessity of Stars makes reading about memory loss indelible. As both Bréone's mind and environment degrades, ravaged by time and climate change, there's an otherworldly spark to it. Not just because of creatively imagined aliens, but because the prose glistens with lyrical magic. It's able to alternate between sci-fi and the mundane in ways that are both skillfully imaginative and cuttingly authentic.

The story is appropriately layered and fragmented, mirroring Bréone's interiority, exploring how a woman's aging undeservingly diminishes desire for them from powerful men who are really the ones that deserve undesirability. Or how information is similarly fragmented--distorted, branching off into many tributaries without much certainty of which is true and which are lies. It's done mainly through introspection, but is also able to form deep characterization, particularly between Bréone and the similarly aged Delphine, whose connection grounds what could be a shaky foundation into passionate humanity.

I'd be lying if I told you I had everything about The Necessity of Stars figured out. It's a novella that packs as much depth as the best of them. What I do know is that the refined prose, excellent characterization, successfully experimental structure, and expansive themes were enough to keep me fully engaged until the end. Time might do some damage to the mind, but just like Bréone's excellent characterization, The Necessity of Stars will remain timeless.

POSTED BY: Sean Dowie - Screenwriter, editor, lover of all books that make him nod his head and say, "Neat!”
Posted by Sean D at 12:00:00 AM