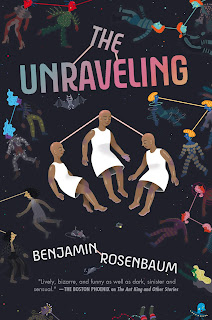 Fift is a 3-bodied Staidchild growing up in the neighbourhood of Foo, in the nation of Fullbelly on a planet with trillions of subterranean inhabitants. Fift has seven Fathers and one Mother; as an only child, ze is viewed a little suspiciously by a society that offers privilege to lastborns. Ze also had problems integrating the sensory experiences of having three independent (if identical) bodies as a child, though ze overcomes this as ze gets older. Fift's childhood is largely unremarkable until zir fifteenth year, when ze receives tickets for a live performance that ends up turning zir whole planet's society on its head. Since ze lives in a world where anyone can tune into anyone else's "Feed" and view what they are doing at any time, zir fame quickly snowballs, with huge implications for zir coming of age, relationship with zir best friend Shria (who, as a person of Vail gender, ze isn't supposed to have a crush on)  and, of course, the revolution ze is caught up in.

If that sounds like a lot, then... yes. Welcome! The Unravelling is a far, far, far-far-far, far, far, far future story of a human society that is immensely different from our own, evolved over tens of thousands of years on an unnamed alien planet to the point where genders, societal relationships, life milestones, norms of privacy and selfhood, taboos and even terms of endearment have become all but unrecognisable. It's a world where individuals exist simultaneously in different places, doing different things and holding separate conversations (sometimes sharing information  they've picked up in one of their other bodies with others who aren't there), where one can sleep AND do one's homework AND hang out with friends at exactly the same time, giving equal weight to each activity. The subterranean setting (the surface of the planet is perfectly inhabitable but has been given over to a giant forest nature reserve) and all the descriptions of floating habitats and transportation tubes is perfectly coherent, but it's also hard to really comprehend. Within this bizarre worldbuilding, all we really have to grasp on to are the very recognisable human emotions, particularly Fift's: and there, the Unraveling uses elements of its far future setting to really ramp up the stakes. Fift is recognisably a teenager to us, but in zir world ze is somewhere in First Childhood, and ze won't be expected to come of age for a century, making zir frustration with zir parents' attempts to control zir even more of a challenge because ze has what, to us, is a lifetime to put up with it. Add into that a complete lack of privacy, and an economic system based on collective societal approval, and Fift has an enormous weight on zir shoulders: one that's created by an unrecognisable society out of all-too-recognisable elements.

The Unravelling's version of gender took a while to land with me, but when it does it becomes clear how restrictive and harmful the gender roles of the Staids and Vails are. There is a definite sense that Staids are given more power in their world, with greater access to knowledge and history through their participation in the "Long Conversation", a sort of ritualised group recitation that is taboo for Vails to know anything about (although the actual content of the Long Conversation is generally depicted as a bit navel gazey and ridiculous despite its cultural importance). Staids are supposed to be the unmoving "centre" around which the Vails operate, but we also see glimpses of how toxic growing up Staid can be, including parents who "mood collar" their children, suppressing all of their emotions in order to make sure they don't violate gender norms. On the other side, we meet more Vails, who are supposed to be passionate and mercurial and to be more attuned to their physicality - which means lots of (appropriate, ritualised) fighting and lots of sex. Our perspective of Vail coming-of-age comes through Shria, Fift's best friend turned forbidden-love-interest, although we get much less of a sense of what makes vem tick. We also meet more Vails who are outright unhappy with the system and their place in it (though most of Fift's parents are Vails, and all of the ones we spend time with represent a much more conservative viewpoint), and its the push to overturn the relationship between Vails and Staids that triggers the broader "unraveling" of society to which the title refers.

Because its worldbuilding is so dense, and because Fift is usually doing something in more than one place simultaneously, The Unraveling is constantly throwing new information and action at the reader, whether that be exposition about new aspects of Fullbelly society or a line-by-line switch between a parental argument and a violent riot. The effect is impressive, but it can also get exhausting, and in the most high-action sequences it has the effect of being both overwhelming and making things feel much slower than they would if each scene was taken in turn. Because Fift is usually at home in at least one of zir bodies, it also makes zir parents (who do technically have individual quirks, but there are several fathers who just become interchangably shrill) into a near-constant melodramatic chorus, berating Fift and each other and the state of society while ze is trying to get zirself out of highly challenging situations. That's not to say that The Unraveling's multi-bodied balancing act isn't impressive - those high-action scenes flow together in a way that frankly has no right to work as well as it does, somehow managing to signpost where Fift is interacting with each character across vastly different social spheres. It's just that the way that affected the narrative didn't hit as well for me as I'd have liked.

Still, despite the painful parents and the oddly paced action sequences, The Unraveling managed to really invest me in its strange, far future revolution and especially in the coming-of-age journey of Fift, the kid who gets inadvertently stuck in the middle of it all. At its core, this is highly engaging science fiction: a novel that asks you to invest in a radical thought experiment, and then follows through with some truly magnificent weirdness and an engaging emotional journey. Its unusual and satisfying and it presents its ideas in a way that I think will stay with me for quite some time. Very good stuff indeed.

Penalties: -1 sometimes there's so much going on that it slows the actual plot down