Thinking about Invisible Sun and The Merchant Princes 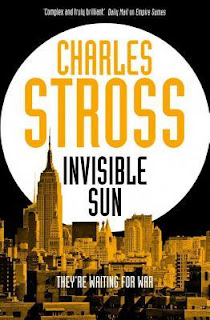 There is a LOT going on in Invisible Sun, almost too much. There is the plotline of Miriam Bergeson and her attempt to hold together a burgeoning democracy in an alternate timeline New York. Miriam was the lead of the six Merchant Princes novels, and is a more minor (but significant) character here. Her daughter is a semi unwilling spy from the United States in what would be our timeline, except for Washington getting nuked by world walkers from another timeline. Miriam's daughter Rita is also a world walker and is supposed to have infiltrated Miriam's administration on behalf of the United States, though Rita's ultimate loyalties seem to be in question. Then - connected to this, the scion of a deposed European dynasty from that alternate timeline is defecting to Miriam's nation (it's not Miriam's nation, but that works for a quick descriptor) and is on the run trying to make her way to Miriam via worldwalking and is on the run in Berlin with a bit of a plot to get her to where she needs to go. Yet more, and only semi connected to any of this - in an unrelated timeline but that is being used by the United States as a staging and research area, the Americans have somehow alerted an alien presence and there is some high tech destruction beyond the scope of what the Americans can image. Any one of these things, especially the tangential existential threat of the aliens, could be is own novel. 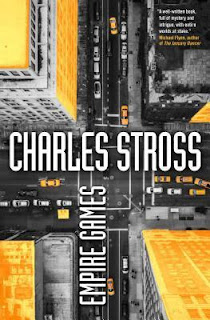 It doesn't quite hang together. When I wrote about Empire Games I noted that "the level of Stross's writing is actually beginning to rise to the level of his ideas" because with that was in contrast "the previous Merchant Princes novels where the writing was just barely serviceable enough to keep pace with how fascinating the creation of this world walking conflict was". The second novel in the trilogy, Dark State, did not quite live up to the promise of Empire Games. It's not that Dark State was bad, per se, it's just that much of the novel was too slow and I tend to only appreciate Stross's work when his narrative pace is closer to, let's say, breakneck.

So even if I am able to separate this novel from Stross's earlier Merchant Princes work, Invisible Sun doesn't quite hold up to be the novel I wanted it to be - which from that perspective seems entirely unfair if I mean that to be that I had any sort of real expectation for Invisible Sun. I didn't. The novel I wanted Invisible Sun to be was...well...good or at least engaging (which would be good enough). It gets back to most of my criticisms of Stross's work where I absolutely love the ideas behind his novels and tend to dislike the actual novels themselves.

But that's the thing - everything about Invisible Sun and the Empire Games trilogy and the Merchant Princes series is amazingly cool and exciting and some of the best science fiction concepts that I want more and more of - but when it's all put together that promise is never realized.

This is, of course, talking around Invisible Sun itself because I could talk about individual plot points and I do half hope that Stross does write more about that inter timeline war between humanity and the alien robot things, but he spent a reasonable amount of time near the end of the book covering enough of it that more might be superfluous. That, and I'm not really the guy to be asking for another novel from Charles Stross that I'm likely to be disappointed by.

But digging into a particular storyline and telling you why one does or does not work for me isn't so much about the storyline or a plot point, but about the execution.

I want to love this book and this series so much that I keep coming back to it. If Stross writes another in a related series, I'll probably read that too. I just need to remember to reset my expectations.

Joe Sherry - Co-editor of Nerds of a Feather, 5x Hugo Award Finalist for Best Fanzine. Minnesotan. He / Him