On the surreal horror of The Underground Railroad

How can evil be told so beautifully? How can depravity look so mesmerizing? 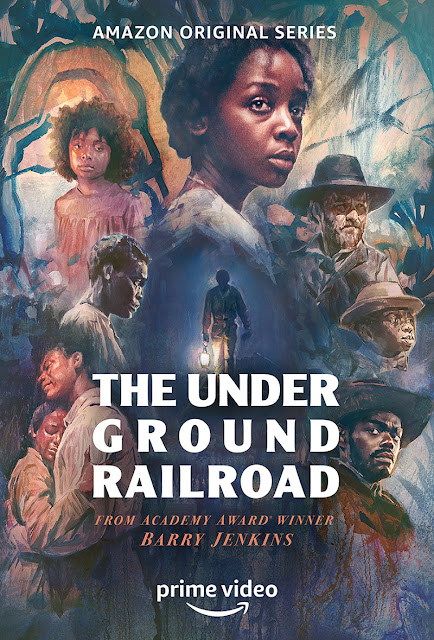 Viet Thanh Nguyen once said, "One of the unspoken silences of the Great American Novel is the assumption that it can only be written by white men." Maybe this is the reason why the literary scene still hasn't found this elusive Holy Grail; critics and academics keep waiting for it in the wrong places. Similarly, David Vann said the Great American Novel could only be anti-American, by which he meant it should focus on the country's greatest shames. Without a doubt, The Underground Railroad by Colson Whitehead fits the description. As one character in the television adaptation just released by Amazon Studios declares toward the end, "America, too, is a delusion, the grandest one of all. [...] This nation shouldn't exist if there's any justice in the world."

The book on which this production is based is not a historical novel; it is more, but the literary scene still seems not to understand how uchronia works. To summarize: in real life, the Underground Railroad is the metaphorical name for the secret network of allies who helped enslaved people escape into free soil. This was the rare kind of conspiracy formed for the cause of good, estimated to have saved one hundred thousand people before the Civil War. In fiction, The Underground Railroad takes place in an alternate world where the metaphor is reimagined as a literal railroad that goes literally underground. In the realm of the symbolic and the dreamlike, represented by the impossible feat of tunnels that go beneath and across the country, protagonist Cora Randall embarks on an allegorical journey through the history of American racial relations.

The first couple of episodes provide us with the key to interpret this story, which is Gulliver's Travels. Each location the protagonist visits is meant to stand in for a political reality. In the case of The Underground Railroad, the fact that one character speaks of vitamins, even though the word wasn't coined until 1912, gives the rest of the key: the tracks are a form of time travel. This can be read in two ways. One is as a collapsing of time: even if there had really been a magical fantasy train to take Black people out of the plantations, the states (and epochs) without slavery were not morally advanced enough to welcome them. The other way is as a more conventional time travel narrative. When Cora visits a fictional version of South Carolina where Black population is kept in check under the guise of benevolent uplift, we are visiting the era of eugenics, unethical medical research and forced sterilizations. When she stops by fictional North Carolina, where the mere presence of Black people is forbidden, we are in the era of segregation and of exclusion laws like the ones enshrined in the foundational documents of Oregon. When she marches through this story's version of Tennessee, it is a barren land consumed by unending fire, a reminder of the lingering pain that violence continues to inflict on the country. And when she reaches an agrarian utopia in Indiana, where Black people can live in freedom, we are given a skewed look at the purportedly equal 20th century and the ideological division between the strategy of respectability and the movement for Black separatism. All of these are revealed to be, as Cora declares, "no places to escape to, only places to run from." Episode 8 shows us a house located at the end of the railroad, and for a few seconds the camera lingers on the wooden lid of a tunnel. The beams of wood and the positions of the nails on it are arranged in a way that resembles the Confederate flag. This is stated to be a house that dates back to the Revolutionary War, which implies that America's rottenness has been hidden there all along.

Our villain is slave catcher Arnold Ridgeway, introduced with his own origin story that leaves us with no satisfying explanations, because evil is never so simple (take note, Disney). The son of a blacksmith with hippie leanings (Ridgeway Sr. both looks and speaks like a very high Walt Whitman), he is given an establishing moment of resounding significance when he is shown to be unskilled at forging chains. His lifelong insecurity belies the myth of Manifest Destiny, expounded only in later scenes when he's drunk and rambling incoherently, because such a perverse doctrine does not deserve a more dignified expression.

Ridgeway is an individual, because stories need characters in whom ideas can be embodied to put them in opposition, but defeating Ridgeway is not the point. The evil of racism goes beyond individual actions, and sometimes, when evil has developed an entire system, it has so much blame to spread around that it can fall on an innocent head. It's easy for viewers of The Underground Railroad to hate the character of Homer, to watch each of his choices and despise the little traitor. But such sentiment is misdirected. He's not morally responsible for having been turned into a tool by Ridgeway. One should instead hate Ridgeway, a hundred times more, for what he did to Homer. This kind of confusion in the task of assigning responsibility mirrors real-life situations where Black people are unfairly blamed for the few choices they have available. When the runaway Jasper chooses to die via hunger strike, Cora accuses him of giving up, but in his circumstances that's the only freedom he can still choose.

The Underground Railroad devotes much attention to the importance of leaving testimony at each stage of the journey. The railroad administration values those records highly, because the price of riding the train, which symbolically is the price of moving forward, is to share the truth. And that truth burns. I had to pause the episodes several times to take a breath, and at one point I had to ask myself why I was pausing, why I was letting my discomfort get in the way of the story. It is fictional, but it tells a truth that calls out for our attention, and on the face of which my and your discomfort matters not one bit. Just as Cora feels guilty for the slaves she couldn't bring with her, this story invites us to consider all the people who lived and died under injustice and who will now remain there forever. As much progress as we're making right now, we can do nothing for the millions who were enslaved. They are in the past, beyond our help, but this story makes the case that that doesn't absolve our generation.

Episode 9 features the traumatic sight of white men assaulting a Black church. As it was then, it is today, like the events of myth, which exist in eternity and are therefore always in the process of happening. The scars of this evil will never vanish, and that is the point. It would be unfair to expect them to vanish, or to actively make them vanish. It is a truth that demands to be told and retold. Like the stuff of myth, The Underground Railroad is told in symbols, with an impeccable use of sound and lighting and shot composition and atmospheric music that enthralls at the same time it horrifies. Director and showrunner Barry Jenkins has crafted a lasting testimony where the characters frequently stare at the viewer, saying nothing, because words are too small and cannot carry this message. Many of these shots have the sun directly behind the characters, obscuring their features to the point it's not clear whether we're seeing them from behind or face to face. We'd like to believe we're watching the show, but it points its gaze firmly at us.

The Underground Railroad is fully aware of the dual nature of this gaze. In episode 2, Black people are employed in a museum where they perform their exploitation for the entertainment of visitors, a metaphor for the show itself. The responsibility inherent to the telling of this type of story is best expressed in episode 8, when a character asks a poet, "If I gave you my sorrows, would you make them sound pretty?" The importance of dramatizations of American racism does not rest on its entertainment value. In fact, online discussion about this show cites its brutality as the main explanation for why Amazon subscribers are choosing to skip it. This is not a fun story. It contains no excitement, no catharsis, no moral validation of America. It will not amuse you. It will not make you feel better about yourself. But that does not diminish its narrative accomplishments. The Underground Railroad is a supremely beautiful piece of art, even while portraying supremely ugly truths, and you need to ask yourself what it says about you when the ugliness of truth is the reason you refuse to look.