Interview: Neil Sharpson, author of When the Sparrow Falls

If you love cold war thrillers, if you're intrigued by AIs, if you're looking for your next favorite read, this is the interview for you!  In the world of When the Sparrow Falls, there is an entire planet where AIs are everywhere. They sounds like us, they look like us, but they are smarter and stronger. And there is the Caspian Republic, the last place on earth where AIs are not allowed.  That's not to say that AIs have never snuck into the Caspian Republic and passed for human . . .

Sharpson's impressive debut novel was born out of a few real life disasters, a love for Le Carre, and a stage play that grew too large for the stage. The play was The Caspian Sea, and it became When the Sparrow Falls, a Kafka-esque novel that's funny in that Vonnegut sort of way, available on June 29th from TOR.  Click here for information about the virtual book lauch.

Sharpson lives in Dublin and enjoys watching and ranking as many Disney and Marvel movies as he can get his hands on, watching all the cartoons, and writing of course!  You can learn more about him at his website and blog, unshavedmouse.com,   and follow him on twitter at @UnshavedMouse.

We chatted over email about his process to convert a stage play into a novel, what it must be like to live in the Caspian Republic, and how the story came together.  And of course we found time for some fun stuff too!  Let's get to the interview!

NOAF: Congratulations on your novel, When the Sparrow Falls! Where did the idea for this book come from, and what is the significance of the book's title? Neil Sharpson: Thank you kindly! The first germ of the idea that would become Sparrow came about when I saw the 2011 version of Tinker Tailor Soldier Spy which is still one of my favourite films. It was my first exposure to Le Carré and I was instantly hooked on the whole aesthetic. I wanted to write something set in a world like this; foggy streets, foggier morals, enemies behind every rain-slick wall and very quiet, very meticulous men very quietly and very meticulously destroying each other. But I’ve always been terrified of getting details wrong so I decided to set my story in a country of my own creation rather than a real Eastern Bloc nation. That’s where the Caspian Republic came from. I had the idea knocking around in my head for a while and then an actor friend of mine asked me to write her a dialogue for an audition. That became the scene where Augusta Niemann calls Nikolai South into her office and gives him the Xirau detail and with that I was away. Writing the play was actually a very difficult process and I ended up putting it down and picking it up again over the course of six years.
A lot of stuff happened in those six years; Trump, Brexit, a global surge of nationalism and toxic nostalgia and all that ended up getting baked into the play as I wrote it. As for the significance of the title, well, that would be a spoiler so I’ll just say that it’s a reference to Matthew 10:31 where Jesus tells his followers that God knows when a sparrow falls so not to worry, because they are worth more than “many” sparrows. It’s one of my favorite passages because it’s at once very comforting but also really hard not to read as Jesus throwing ridiculously petty shade.NOAF: In the story, the Caspian Republic is the last bastion of humanity. No AI's (except a few special visitors) are allowed into the country, and the Republic is in a permanent cold war with the rest of the world. How does that affect the populace of the Caspian Republic, to know that their cold war will never end? What kind of society do they live in? NS: It’s pretty damn awful. It’s not quite as hellish as, say, Oceania, but definitely on the level of present day states like North Korea. In the beginning (around 56 years prior to the start of the novel) the Caspian Republic had a somewhat bohemian spirit and a commitment to artistic expression and equality between human beings. But that became eroded steadily over the decades and now it’s a decayed, intellectually exhausted, brutally repressive state sustaining itself through sheer, bloody-minded refusal to die.
That said, life is by no means equally bad for all of its citizens. A high-ranking party member living in an affluent neighborhood in Ellulgrad (the capital) for instance, will have a life a million miles removed from one of the native Azerbaijani, who were dispossessed from their lands when Caspian was formed. One thing I wanted to show in the book was how plenty of people in Caspian are free to voice dissent and criticize the ruling party and the security services, as long as they are the “right” people. However, by the time the novel begins there have been harsh trade embargoes placed on Caspian and even the “right” people are starting to go hungry. Which is why Lily Xirau is invited into Caspian, and how our story begins. 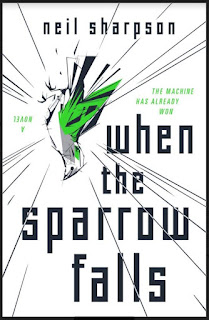 NOAF: When the Sparrow Falls was adapted from your stage play The Caspian Sea. What was that process like, to take a stage play that is all movement and dialog, and adapt it into a novel? NS: It was an absolute joy. I’ve always struggled with structure but when I set out to write Sparrow I already had the structure laid out for me as well as most of the major characters, themes, etc. The first draft only took me three months because all the hard work had been done by that idiot patsy, Past Neil. NOAF: While you were adapting the play into a novel, where there any scenes that had to cut entirely? Were there any scenes that aren't in the play and were created exclusively for the novel? NS: The novel is to all intents and purposes the play with some extra characters and sub-plots, a lot of extra world-building, backstories for most of the main players and resolution to several mysteries that were left ambiguous in the stage version. The biggest change, without a doubt, is that my favorite character, Sally Coe, is entirely absent from the play. There is one scene in the play that is not in the book and that is because it’s the only scene in the play where Nikolai South is not present and so, since the book is told first person from his perspective, there was no elegant way to include it. It’s a scene where Lily wakes up in her cloned human body and a nurse helps her learn how to walk and navigate in the physical world for the first time. It’s a scene I really like, and shows a slightly snarkier side to Lily while also showing how other natural born humans such as the nurse view the Caspian Republic (they’re not fans). NOAF: What was your favorite scene in When the Sparrow Falls to write? NS: The scene in the Morrison Hotel where Grier and South get to enjoy a good meal and actually start to bond as they go over the death of Paulo Xirau. Just a scene I felt really came together nicely. NOAF: Now for some fun stuff! Which Marvel movie is your favorite? NS: MCU? Thor: Ragnarok. Any Marvel movie? Into the Spider-Verse. Any comic book movie? Into the Spider-Verse. Any animated movie? Into the Spider-Verse. Any movie? Into the Spider-… NOAF: Who is your favorite character from Futurama? NS: Oh come on, how is that even a question? It’s obviously Doctor John Zoi…ALL HAIL THE HYPNOTOAD. NOAF: ALL HAIL THE HYPNOTOAD
POSTED BY: Andrea Johnson lives in Michigan with her husband and too many books. She can be found on twitter, @redhead5318 , where she posts about books, food, and assorted nerdery.
Posted by Andrea Johnson at 12:00:00 AM