What starts as a playful, commonplace whodunit becomes a labyrinthine exhibition of metafictional brilliance 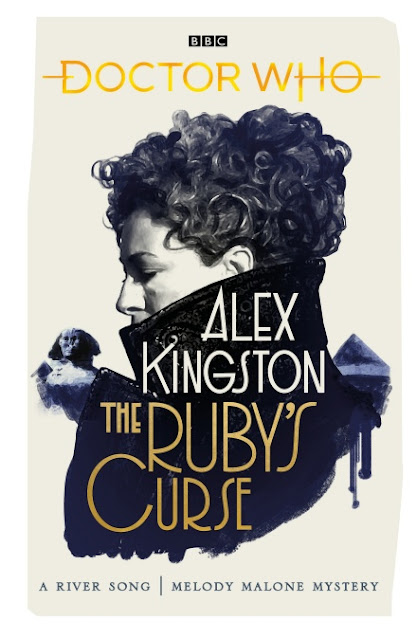 This is more than a Doctor Who tie-in novel. This is worlds, galaxies, and entire dimensions more than a "related work."

The true nature of this book is disguised for over half of it, but it is announced incredibly early, when River's inner monologue remarks "that words had power, that words could be arranged in more combinations than there were stars in the sky, made into patterns that created whole worlds." This statement's deeper meaning takes a while to be revealed, but the wait is a rewarding one. As River herself says later, "the discovery is wonderful, but only as the climax of the journey."

If you believed Steven Moffat had stretched the possibilities of messy timey-wimey plots to the limit of their artistic potential, you haven't seen anything yet. In The Ruby's Curse, Alex Kingston takes the signature narrative devices of the Moffat era (self-sustaining paradoxes, life in conversation with media, plots that progress between different levels of reality, riddles with multiple true solutions, the notion of people as entities made of stories) and dials them up to eleven. The plot intersects with itself and winds up around itself and branches into and out of the land of fiction until it lands majestically in our reality (yes, really).

On one level, there's the character we know, the River Song who killed the Doctor and then married the Doctor, now a successful mystery writer struggling to meet a deadline ("Yes, deadlines are technically irrelevant to a time traveller. But you try telling that to my agent"). She's no longer an inmate at galactic prison, but she still comes back from time to time when she needs a quiet place to finish her book. But before long, she overhears talk of a mysterious machine that can rearrange the universe... or break it, more likely, and she jumps into adventure to outrun the bounty hunters who want the machine and are willing to kill for it.

On a second level, there's the doubly fictional character of Melody Malone, which River based on herself. In 1930s New York, the theft of a gem dug out from Cleopatra's grave lets River play with all the classical tropes of detective fiction: deadly romance, treasure maps, shady mob bosses, obvious disguises, poisoned drinks, and ancient Egyptian curses.

All that is fun enough. But the true fun starts when these two narrative levels start to blur into each other. River's new prison mate, Ventrian, is a fugitive in a mission to destroy the universe-shattering machine, and starts hiding clues in River's book while she's still writing it. The process messes with her mind (and the reader's) in a way that takes advantage of the rules of fiction just before breaking them. And this is where the novel becomes a reflection on its own craft, because, in a way, every writer already possesses such a machine. Writers have the power to create and erase universes by merely saying so. To the characters who live inside a book, that power looks like a boon from the gods. Conversely, to a writer striving to create, the loss of a story feels like the death of a universe. As River puts it, "acquaintances have told me of painful things they've experienced—gallstones, childbirth, decapitation—but I'm practically certain none of those is anywhere near as painful as a writer losing a nearly completed work in progress."

Kingston masterfully keeps the plot in contact with the fiction inside itself while making it steal bold glances at the reader. For example, in a visit to the 1930s (but not Melody's 1930s—yet), River mentions that "there's nothing good on the telly until 1963." Comments made in passing allude to the future we know for this character: it turns out she's not particularly fond of libraries, and would like for there to be a happy afterlife with all her friends. This is not just a wink at the fans; it is part of the whole game of having fiction invade the realm of reality. Doctor Who's time (and space)-tested trick of making a character have a conversation with a piece of media becomes in The Ruby's Curse an essential part of the reading experience. In a key scene, River talks to a book, and the text that is already written, printed and published talks back at her; once she enters the land of fiction, she notices that the other characters only perform interesting actions when they're within her focus of attention, and appear essentially motionless the rest of the time (like some sort of reverse Weeping Angel, or more accurately, like every literary character in every story ever).

In typical River Song fashion, this novel is full of spoiler warnings. You could, of course, read the ending and discover the trick of the story, but the journey is more interesting if you follow River as she experiences it along with the rest of the cast. Once she becomes a piece of fiction (not that she wasn't already, but now it's for real, which is still fictional, I know, but now it's, like, really fictional this time), the conventions of storytelling are explicitly made into worldbuilding principles, and your reading process is likewise transformed. One particularly striking instance happened to me during one chapter narrated by Melody, but not written by River, because River had already entered the book, so I asked myself in panic, Who is even writing this chapter? and the answer is, obviously, Alex Kingston. That she made me forget that is part of the magic of her craft.

As a Melody Malone mystery, this novel obviously draws elements from the episode The Angels Take Manhattan, where Moffat showcased his unique tricks as a plot weaver. The Ruby's Curse is an answer and a sequel and an expansion of the themes presented in the episode. It's unfortunate that previous Doctor Who knowledge is required to enjoy this marvelous book, because it's a stellar example of experimental writing and of the myriad ways a performer can channel her character's voice.

Bonuses: +3 for pushing the boundaries of metafiction into uncharted universes.

Penalties: −2 for a steep entry barrier for people not already acquainted with Doctor Who, −2 because Melody's banter can get very tiresome at times.