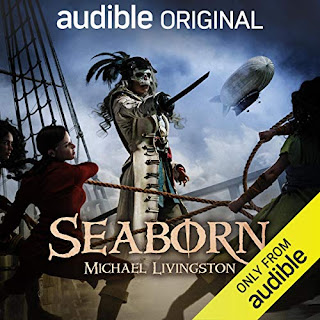 Bela may not be salted, may not be a Shipmistress (Captain) herself just yet, but everyone knows who she is. Daughter of the most powerful woman in the isles alone would mark her as someone to watch, but Bela also has the cognomen Carnae (hero)  because, at a young age, she WAS a hero, saving a number of ships in harbor when the airship flying Windborn made their first, and a deadly, appearance over the skies of her home. Now, as second in command of the White Crow,  Bela is seeking to become salted, become a Shipmistress in her own right, which requires a trip to a mysterious, deserted island to get some rather special wood as a rite of passage.

In the meantime, Shae is also a second in command, but she is second in command to the Bone Pirate, the most feared pirate in the fair isles. Even piracy, though, is not what it used to be with the arrival of the Windborn in the skies, and so when the Windborn appear in the skies once again, Shae has a daring plan that will even the odds against the untouchable threat from above. But there are greater dangers still on the island of Mist Mahockie, and secrets, too, that will shake Pirates, Seaborn and Windborn alike.

All of this, and more is in Michael Livingston’s audio-only fantasy novel, The Seaborn.

Livingston creates a rich and vivid world here with a lot to offer, and a canvas for adventure. The Seaborn are a Matriarchial society, where men are useful for strong backs, breeding, and not much else. It is women who lead, women who generally fight, women who command the ships and the world, and women who are the magic users (Evokers). There are some indications that among the Seaborn, men aren’t even really engaged in romantic entanglements with women, women seeking such things in the arms of other women. The aforementioned magic system is an elemental based one, with practitioners almost always focused on a single of the eastern classical elements. The magic using Seaborn contrast with the Windborn, who use airships, technology and absolutely despise magic. This could have been a facile “magic is bad, technology is good” in the hands of a lesser author, but the reasons why the Windborn and Seaborn have developed the way they do is part of the revelation of the novel.

The action and adventure beats of the novel are also a major highlight of the novel for me. Pre gunpowder age of sail action on the high seas, with elemental magicians means boarding actions, island exploration, “sword and crossbow” fights. It has a medieval feel in terms of the combat tech (and given Livingston’s day job and knowledge of medieval history, that is right in his wheelhouse) with sailing technology that is a little more age of sail. The Windborn, when they do appear on camera in the main timeframe (after an opening prologue) are a whole other kettle of fish altogether, and the author does a very good job in showing what the technologically inferior Seaborn have to deal with in facing down that foe. The writing all for this flows well into the ears of the listener, and like his previous novels, it is engagingly written.

Speaking of which, since  this is an audio-only production, additional word about the narrator and how the book sounds is in order here. The narrator is Elizabeth Evans, who does a very good job with bringing Bela, Shae and the other characters to life. There are plenty of action sequences in this sea borne fantasy, and the narration works well with the text to make it clear and exciting to listen to. In all, Evans was an excellent choice of narrator.

My major criticism of the novel has to do with the character of Illyra, Bela’s friend. The novel opens as them as a two-hander, the famous Bela and her almost Watsonian friend. Illyra, however, gets herself shuffled mostly offstage at about the same time that Shae appears as a viewpoint character, and while we get stuff from her point of view, it is, charitably put, not plot-relevant to this novel. It While Bela and Shae carry the main plot and get involved in things central to this novel, Illyra finds out a couple of things that the main plot does not reveal, but otherwise, charitably, once she is mostly offstage, her sections become fewer and feel a lot more perfunctory. I suspect that this might be more important in a subsequent novel, but within this novel, within this story, it doesn’t go far and doesn’t go anywhere. I think this offstaging could have been done better than it was handled here especially for readers who are only going to read *this* novel.

Overall, despite that major criticism, the audiobook has a lot to offer. Not a criticism per se, but my usual bias with fantasy novels that really can’t be addressed easily in an audio-only production: What I really would love is a couple of maps, of the central island in the novel, and of the Fair Isles in general. Livingston does a great job in bringing an audio-only production to life with good and clear writing, however, and I am interested in listening to more works set in this universe.

Bonuses: +1 Rich and inventive worldbuilding that is immersive and well through you.

Penalties: -1 Plot handling of a major character being shuffled offstage really could have been done better.

Nerd Coefficient: 6/10  still enjoyable, but the flaws are hard to ignore