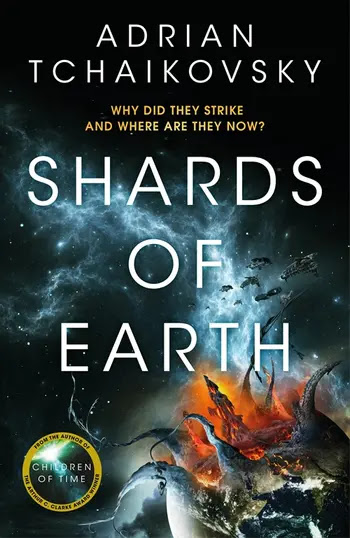 Imagine you're an ant, living your tiny ant life in a nameless anthill. Then workers for a landscaping company suddenly show up and start digging up your home, forcing you and all of your kin to run for their lives. The mysterious newcomers use the sand to make cement and leave a pretty-shaped, well-proportioned statue with pleasing angles and nice colors in the place where your home used to be. When you visit neighboring anthills, you discover the same catastrophe has been happening for quite a while. No one knows why the gigantic creatures do that, but it's clear there's nothing ants can do to oppose them.

Now imagine that anthill is our planet, and you'll have an idea of the lives of the characters of Adrian Tchaikovsky's new space opera novel Shards of Earth.

Arthropod analogies are usually crude oversimplifications, but I'm sure Tchaikovsky would appreciate this one. His fiction is a vehicle for his longstanding obsession with invertebrate anatomies and societies, and the crowded Shards of Earth devotes plenty of space for creatures of this type. But this is not just a space opera about humans and lobsters exploring the galaxy and running away from mad cultists (although that's one part of it). It is a psychological journey through the process of reclaiming one's autonomy as a free, thinking and feeling entity, a journey made harder by the inescapable fact that such recognition of the self is dependent on the consciousness of a separate self. This may take the form of robot emancipation from human control or (more terrifyingly) humanity asserting its presence before an uncaring force.

In the universe of Shards of Earth, humankind lives spread across several worlds of varying inhabitability, a condition known as the Polyaspora, just over a century after Earth and our first colonies were turned into ruins by a wave of colossal alien megastructures made of an indestructible material, equipped with gravity-manipulating technology, and capable of rearranging matter at the atomic level to transform everything that comes near them into a perfect but dead work of art. They don't vaporize or crush or flatten: they beautify. Entire planets, with their cities and biospheres, are warped and twisted to make these curious-looking spiral flowers of devastation, monuments to their inhabitants' helpless fragility. In the human tongues, the unstoppable makers of these sculptures are called the Architects.

What ended the war with the Architects was the near-sacrifice of the Intermediaries, a select group of artificially-enhanced telepaths capable of penetrating the invaders' minds and make the simple case, We are here. Please see us. This experience is deeply traumatizing and often fatal for those who undergo it, no less because any spaceship that dares to come close enough to an Architect for an Intermediary to be able to make their mental plea is also close enough to be unmade and remade as an exquisite piece of abstract debris. When one Intermediary finally made contact and forced the Architects to notice the thinking nature of humanity, the Architects, after eighty-four years of horror, simply left.

The novel takes place thirty-nine years after this costly victory. And it seems like the Architects are back.

Although this is a universe that has telepaths and FTL travel (and where only the former can safely do the latter), its rules lean toward the hard end of the science fiction spectrum. So it came as an interesting surprise to me when I recognized which philosophical underpinnings supported the base of the fictional building. I must confess I never expected a space opera so rich with solid biological and geological detail to draw inspiration from Hegelian absolute idealism of all things, but here we are. Beneath the political machinations and successive backstabbings (and some literal stabbings) provoked in the panic over the Architects' return, Shards of Earth is also doing something more ambitious: it's making a statement about the nature of freedom and the conditions required for it to be an effective reality. Numerous factions in this universe are confronted with decisions regarding their freedom or the surrender thereof; there are the robots that gain independence from humans, but there are also the new generations of telepath pilots working under slavery contracts, and a clone army of female soldiers loyal only to their genetic lineage, and a strange religion that promises safety from the Architects in exchange for political submission to a regime of alien bivalves. There is a recurring theme of master/slave dynamics throughout the text. If my reading of the novel is correct, freedom in this universe is understood as requiring a gesture of mutual acknowledgment.

But, as it turns out, mutual acknowledgment is the most dangerous thing that exists.

In chapter 4 of his Phenomenology of Spirit, Georg Wilhelm Friedrich Hegel spoke of what he called a "master/slave" dialectic, the process whereby consciousness becomes self-consciousness via the interaction with another like itself. According to Hegel, self-consciousness exists inasmuch as it is recognized, but the process of recognition needs to be mutual. Two interacting self-consciousnesses can only recognize themselves when they recognize each other. While the category of other is initially defined in negative terms, as the things that are not-myself, this interaction of minds calls for letting this other make a claim to selfhood, that is, to admit that a thing that is not-myself is legitimately another self. This process necessarily looks unequal to each of the participants, because each can only fully perceive itself. Hegel describes this mutual proving of worth as a life-and-death struggle, an assertion of existence that is only prevented from resulting in the negation of the other's existence by that other's own assertion. Therefore, achieving full recognition requires exposing one's life, risking for a moment its negation by the other. He called this a "master/slave" dialectic because each participant in the interaction of minds exerts power over the other, both seeking to negate and exposed to being negated. Crucially, each participant plays the role of mediator in the interaction, or, depending on who is translating Hegel, an Intermediary.

Likewise, Tchaikovsky's novel describes the mental contact between the Intermediaries and the Architects in terms of an exposure of the self, an almost-annihilation that lays bare every truth about human life. The protagonist, a veteran telepath of the first Architect war, experiences this mental communication as a battle where he faces unblinkingly the fullness of his fear of death and where the prize to be conquered is a tiny instant of being seen. That's all it would take to save the galaxy's billions of souls, but each attempt taxes him to the last drop of his willpower. It takes all that he is, all that he has, all that he can, to go the long and treacherous way to hello.

In Shards of Earth, it is rare to be seen as one truly is. Factions with evocative names, whose poetry alone makes the reader want to know more about them (Broken Harvest, Mordant House, the Parthenon, the Betrayed), routinely spread lies and propaganda about one another, misrepresenting their respective roles in the war to gain an advantage before the next one. As inconvenient as it is to be seen inaccurately, it pales to the horror of being fully seen by an unseen other, which in this novel's universe is what intelligent creatures experience during FTL travel. In the realm beyond ordinary space called unspace, objects do not physically exist, but minds perceive a hidden presence watching them at all times. Over time, this sensation is beyond the mental strength of all but Intermediaries. If the Architects represent an aberrant form of the Hegelian other which cannot be negated but can indisputably negate you, the presence lurking in unspace represents a Hegelian other which is already denied, for it is not there, yet you fear what it may mean for your realness if that nonexistent other were to acknowledge you.

Because robots, too, are vulnerable to unspace, they are declared to be intelligent and ultimately granted independence from humans, nominally as a reward for having participated in the war. To put it in Hegelian terms, they cease to be things because something else, no matter its hiddenness, perceives them as not-things. The moment of recognition is the moment of freedom. This noteworthy reversal of the master/slave relationship is, however, in agreement with the Hegelian philosophy of identity, and is mirrored in our protagonist's refusal to be bound to any one faction after years of fighting the Architects. As Hegel explains, "The individual who has not risked their life may well be recognized as a person, but they have not attained to the truth of this recognition as a self-sufficient self-consciousness." In the Hegelian system, as well as, apparently, in Shards of Earth, risking your life is necessary and sufficient to earn you your autonomy.

You don't need to have read German idealism to enjoy Shards of Earth. It remains an endlessly entertaining adventure about the struggle for human survival. It has amazing alien landscapes, and fortunately for us, it pauses for long enough to give each of them enough description for you to get a complete picture before jumping to the next world. It has complex alien societies, most of them inspired, in classic Tchaikovsky fashion, after Earth invertebrates, but made believable and relatable by the power of wordcraft. It has plenty of political intrigue to give you your fill of spy mystery. But behind it all, it has copious food for thought. It explores what it means to truly reach another being and not lose yourself in the process. Feel free to lose yourself in this wonderful book. But be sure to come back.

Bonuses: +2 for meticulous worldbuilding, +1 for not once losing its firm hold on the reader's interest.

Penalties: −2 for just throwing the reader into an incredibly complicated galaxy of opposed factions and species with little warning. There is a detailed chronology at the end of the book, which finally lays out who is angry at whom and why, but it would have been a lot more welcome at the start.