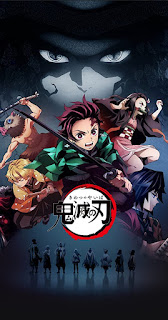 This month's entry in Thursday Morning Superhero is going to feel a bit different and I feel obliged to cram some comic book news before I hop into this month's post.  I started reading the Demon Slayer manga after being blown away by the series and the movie that was released recently.  Koyoharu Gotōge does a phenomenal job of bringing humanity to this otherwise gruesome series, about a young man who is attempting to save his sister after his family is murdered by demons. This series effectively mixes the tragedy of human loss with the gore that you might expect with a series featuring demons, sprinkled with humor.  I started watching the series with my 13 year old and have really enjoyed sharing this experience with him. The violence and gore are quite intense, but the story is sweet and it is my current comic book obsession.

Outside my world of comics, which still include the phenomenal books from Bad Idea and the Locke and Key crossover with Sandman, I have had my live consumed by The Secret by Byron Preiss.  It is a book about the fair folk and hidden treasure that was published in 1982.  Thanks to my brother and sister-in-law watching Expedition Unknown on the Discovery Channel this mystery found its way to my cell phone.  The book weaves a tale of the fair folk making their journey from their homelands to North America and the 12 treasures that they hid.

On the surface this isn't that exciting, but as I delved deeper into the lore and the message boards online I quickly realized that one of the treasures that was buried in 1980 or 1981 was located in Houston.  This is the city that I grew up and currently don't live too far from.  My family watched the episodes about The Secret on Expedition Unknown and I have now tasked myself, with the help of my family, with finding where the treasure in Houston is buried.

There are 12 casques in total that were buried in parks across North America that contain keys that can be exchanged for precious gems.  The casque in Chicago was found shortly after the book was published, but it wasn't until 2004 when the second casque was found in Cleveland and 2019 until the third was unearthed in Boston.  The remaining nine are thought to be in San Francisco, Montreal, Houston, New Orleans, St. Augustine, Milwaukee, Roanoke Island, Charleston, and New York City.
A lot has changed in the nearly 40 years since the publication of The Secret which makes this task quite difficult, but the idea of a hidden casque not too far from where I reside has captured my interest.  If you have any thoughts or theories on The Secret feel free to hit me up on Twitter at @newhousebailey.
POSTED BY MIKE N. aka Victor Domashev -- comic guy, proudly raising nerdy kids, and Nerds of a Feather contributor since 2012.