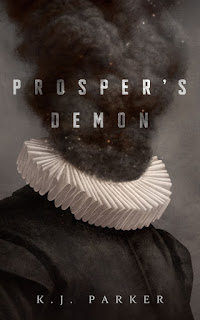 Subject: Parker, K.J. Prosper's Demon [Tor.com Publishing, 2019]
Accolades: N/A
Genre: Fantasy
Executive Summary: The unnamed and morally questionable narrator is an exorcist with great follow-through and few doubts. His methods aren’t delicate but they’re undeniably effective: he’ll get the demon out — he just doesn’t particularly care what happens to the person.
Prosper of Schanz is a man of science, determined to raise the world’s first philosopher-king, reared according to the purest principles. Too bad he’s demonically possessed. (From Goodreads).
Assessment: Prosper's Demon is both electrifying and harrowing, juggling witticisms and gut-punches with finesse. It asks its readers a question if it's possible to create nuggets of gold within a degrading world. It's poetic that the book answers this question not only from its themes but through its impeccable craft. Prosper's Demon takes place in a world of horror, in which insidious creatures takes root in a person. But every so often, we see a beautiful character moment or a charming turn of phrase. It's a wellspring of fun amidst a story that could easily be overbearingly dreary. It's a nugget within a setting that should shun it but doesn't.
The narrator might be unnamed, but he certainly doesn't evoke the aura of a faceless character. He's snarky, cunning, and perseverant. His voice buoys what is already an enticing concept into a singularly compelling one. He doesn't give the reader all the information of him and his world at once, instead methodically laying it out as the novella goes along, saving the bigger surprises until the end. It's done in a skillful way that doesn't seem deceptive but natural to the narrative's progression.
Prosper's Demon is a delightful read. My interest never wavered. It's a story with a scale that works perfectly for the size of a novella, telling a compact tale, while its economically explained but expansively scaled worldbuilding leaves room for further tales in its setting. When our own world completely degrades from chaos and carnage, we can take some respite that much art - including Prosper's Demon - came out of this pandemonium. Art is golden nuggets amidst detritus, and this novella is a testament to it.
Score: 8/10
POSTED BY: Sean Dowie - Screenwriter, editor, lover of all books that make him nod his head and say, "Neat!”
Posted by Sean D at 12:00:00 AM