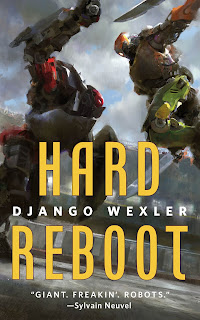 Executive Summary: In a science fiction landscape, Kas is on a research trip to Old Earth. She quickly finds herself entangled with a con artist named Zhi, putting them in a situation where they must rely on each other. What follows are giant robot battles, intergalactic politics, smoldering passion, and a plot that gleefully never hits the brakes.

Assessment: Giant robots with flashy spectacle and excessive power works best when encompassed by a simple plot. That way, action can be on full display, the story can burst forward like it’s on a jetpack, without details blocking its path. Hard Reboot does exactly that. It’s the size of a novella, not because it’s a half-finished story that ends abruptly, but because it sets a clear path, having much to accomplish, and never meanders. Characterization is established along its high-octane journey. There are plot twists galore, but there’s not even of shimmer of halting introspection. Instead, it's processed while the protagonist’s engaged in action, whether it be interpersonal drama, intergalactic politics, or giant robots going boom.

The way intergalactic politics is handled deserves commendation, as I never felt adrift, unsure of what the world was like--and at the same time, I never felt inordinately info-dumped. Hard Reboot’s distribution of information is on a level that feels like another galaxy. .

The story doesn’t just make you care about the action and the world it inhabits—it’s a more widespread feeling. The engagement I had for the pyrotechnics and worldbuilding is matched by the central relationship. Both the turmoil and grace between Kas and Zhi is always believable, hard-hitting, and compelling. Robots are definitely put through the wringer in this story, but it might also wreak turmoil on your heart. If I have one complaint it's that as breezy and delightful as its story and world is, I wish it went a little deeper

Hard Reboot clears the way for it to zoom along. Like many action-packed stories with giant robots, its unimpeded path might be expected, but the amount of power its fueled with to get to its ending certainly surprised me. With strong-hearted characters, a gift to simplify but not reduce its grand world to its readers, and a pace that never stumbles, Hard Reboot exudes fun.