A return-to-the-field novel with a big SFnal idea executed as a sausagefest. 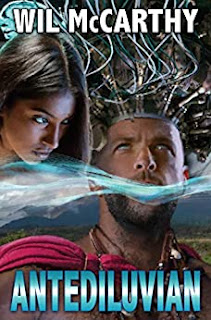 Harv Leonel does not have a problem, but he has a Big Idea. It is his contention that the y-chromosome of the human genome can and does act like a quantum computer, recording and storing information, information that could be potentially accessed and remembered. What Harv does not realize is that hooking up his brain to a jury rigged device will not just draw on the history of his ancestors as straight up memory, but will plunge him into the very lives of his ancestors, histories that contradict much of what we know of the past. Or, these lives and stories will confirm that much of what we thought of as myth and legend actually happened in the past, preserved in our stories, but also contained within the y chromosome of men.

This is the premise of Wil McCarthy’s novel, Antediluvian.

Wil McCarthy’s SF career has seemingly been in stasis for over a decade. With plenty of stories in the 80’s and 90’s, and novels in the 90’s and early 2000’s, Wil McCarthy’s novels have always been long on action and Big Ideas. But since the mid 2000’s, new fiction dried up entirely.  Some older novels were re-released as ebooks under his own auspices, but nothing new appeared, until 2019, and this novel, Antediluvian.

Antediluvian, unlike Gaul, is divided into four parts, with the frame story of the “present day” where Harv’s experiment takes place. After an initial use of the device to plunge him into the first story, the subsequent three stories play out without Harv’s active desire or moving to do so, explained as being the aftereffect of the original use of the device. It’s a useful conceit to allow the subsequent three memory explorations of the past to play out when they would not have rationally done otherwise. I suspect that a 1950’s version of this novel would have had Harv hook himself up again, for “Science!”. Fortunately, Harv as written here isn’t quite the 1950’s SF hero archetype in that regard, at least.

The first of the four memory delves into the past establishes the themes and ideas of the entire novel, is the longest, the most detailed, and I think the most successful. Harv is catapulted into the memories (or is it just the memories?) of Manuah Hasis, harbormaster of a neolithic metropolis by the edge of a sea and a great river, built on very flat ground. Manuah is worried about the slowly rising waters which threaten not only his harbor, but also the city itself. He has further worries when a comet appears in the sky, and gets ever larger as well.

This first portion feels a lot like a L Sprague de Camp or Harry Turtledove or Judith Tarr historical fiction novel, except set in a legendary time and place in the neolithic. The story of Manuah and his world, and his and his civilization’s fate are clearly meant to evoke several myths and legends--the biblical Flood, the story of Atlantis, and, given his name and story, the Hindu Rig Veda as well. We get a look at the developed city and life of Manu and some real interesting speculation and good worldbuilding on how a neolithic metropolis might actually work in practice. Some of this feels a little strained (the way money is handled in this world, as well as the lack of writing) but this portion of the book reminds and reflects on what men in the neolithic might have been capable of doing given the materials and knowledge they had access to.

The second of the narratives is also interesting, taking us back to the time of Cro-Magnon and Neanderthal interactions. The Neanderthals (trolls!) are definitely a threat and on the backfoot here, and we get some interesting bits by having a wooden “castle” and the fighters of the village being translated as “knights”. So with stone weapons, the knights go off to rescue some kidnapped maidens from the trolls. It’s a grand adventure, where we the reader are carefully given information that the characters themselves don’t quite realize, and while the society we see here isn’t as complex (or as richly described) as the first (and still, best to me) portion of the novel, it is still a fascinating world.

The third and the fourth of the memory recalls of  the past are far more dream-like and amorphous in thought than the first two. It goes to the Sapir Whorf hypothesis to a degree, that thought and cognition and worldview are drastically shaped by whether or not a character has language or not.  In the third flash to the past, Harv is put into, for lack of a better word, a Garden of Eden, which continues the theme of these past events being echoed forward into our myths and legends.  It’s a story of our ancestors just at the edge of language, some people (like our narrator) being able to speak, and many others being “mutes”, unable to speak. The book doesn’t officially take a position but seems to lean toward the idea that the ability to speak is a genetic mutation, and a key one. Frankly,  this is the least interesting of the stories of the book for me. Human ancestors grows up, tries to learn, goes off on local adventures, and learns about death.

The fourth and final story takes us all the way back to Homo Erectus, and an ancestor without language altogether, and man’s first attempt at a sea voyage. This seemed like a fun challenge for the author, to deal with characters without language, but with enough cognition to try and understand concepts all the same. This portion affirms that Harv’s ancestors’ trait for being adventuring wanderers started long, long ago. It’s a fun little story, that shows off the action and adventure beats from the first two portions again, in this earlier time.

A few things annoyed me about how the past was portrayed from Harv’s point of view. There is plenty of wonder and wow, and “how could this have happened?” as Harv learns about the true history of the Neolithic as portrayed in the four stories. That’s all great. Lots of times, Harv is blown away by what he discovers. But too many times in the narrative, Harv comments on something, be it language, or some other aspect of society, as “child like” or “childish”. For a novel that is trying to show a conception of Upper Paleolithic (and earlier) cultures as being far more sophisticated and complex than current conceptions show, these bits feel really discordant. I can see that the author really means “unsophisticated” but the word choice here matters and it hard counters the entire point of McCarthy’s narrative.

The fatal  weakness of the novel is one I didn’t recognize or see in his previous fiction (and I fear the suck fairy, now) is the, in the most charitable view, strong male focus that the novel has. Less charitable would be to call this a sausage fest. While there is some spouted theory that the “quantome” might exist on other chromosomes other than the Y, the very premise of the novel means that only men , the male point of view of history, is the one that gets recorded, the one that counts, the one that gets saved in our very genes. They are necessarily from male point of views (I think the novel would have been far more interesting had the quantome been on the x chromosome and so Harv get to see events from both male and female ancestor perspectives).

The actual events themselves are necessarily male dominated. The societies and perspective we see isn’t quite as bad as they might be, which could be damning it with faint praise. Women have a distinctly subordinate role in all four of the societies we see. This may be partially because we are filtered only through male points of view, but again, “The Past is Male” is a story that we really didn’t need to tell in such monochrome. So much could have been done with especially the first two portions, and both times, the opportunity is absolutely wasted.

And then there is Harv’s assistant and lover, Tara Mukherjee. Once the novel is mostly Harv in the memories of the past, she is out of the narrative, but when she is in the narrative, I felt more than a bit uneasy about her. A young researcher, 17 years Harv’s junior, and Indian, she presents in all of the worst stereotypes of “hot exotic young woman who has fallen for the protagonist and stands by her man”. If this weren’t enough, and I dislike spoiling novels, but I really want to bring this point home, at the end of the novel, once Harv’s mental journeys are complete, Tara comes to a decision, privately about their relationship. Her decision? She decides that she will stay with Harv for the time being, and that could be months or years, but she will ultimately leave him because his previous incarnations were all wandering explorers and she needs a good stable man for having a family and Harv is not that, but in the meantime the fun and sex can be had.  This is in itself also going right to male fantasy and deprotagonizes Tara even further.

And I shouldn’t rag on publicity matter but this is striking to me:

“Before disaster erased the coastlines and river valleys of the Antediluvian age - before the Flood - men and women struggled and yearned and innovated in a world of savage contrasts into which Harv and Tara are thrust, unprepared. Will their science be enough to save them?”

The thing is, when I started this book, I expected both Tara and Harv to participate in the time travel elements. When Tara turned out to be only the hot girlfriend 17 years his junior who really has no role or function in the narrative, reader, I felt more than a bit cheated. My mental conception of this book was at strong odds with the reality of what I actually got.

Rather than being a triumph, Antediluvian, is, in the end for me, fatally flawed. There is a really interesting idea here, and in the abstract, especially the first and second past time periods, some really intriguing pseudo-historical fiction, especially in the first portion. 13 year old me would have loved this book to pieces. Me today cannot love this book, the flaws are too hard to ignore.

Bonuses: +1 for an inventive and interesting Big Idea.

Penalties: -1 Immense problems with the premise tie into the overall sausage fest that the novel is.

-1 for completely being awful to the main female character’s personality and arc.

-1 for Harv himself as a character being half-Heinleinian hero, half horndog.