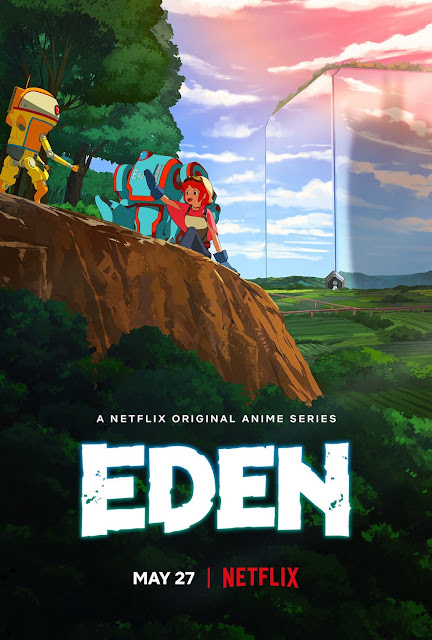 "Does this world need humans?" is not a topic you often find in G-rated cartoons. Netflix's new anime mini-series-which-should-have-been-a-movie Eden moves effortlessly between friendly smiles and adorable fruit-harvesting robots, on one hand, and the messy debate on humanity's proper place in a world we're carelessly tearing apart, on the other hand. In this fictional future, an Earth without humans looks like a paradise painted in bright pastels, but the fact that the robots have forgotten how they came to exist points at an unpleasant mystery hidden in the past. No one has seen humans in a thousand years and no one knows what became of them. When two harvesters stumble upon a cryogenic pod occupied by a human infant, they are faced with a dilemma: should they neglect their tasks and protect this creature, or report it to the security robots, knowing that even talk of humans is forbidden?

Because this is a show for kids, the two robots obviously choose to flee and raise the child. But because this is not a show that underestimates its audience, it wisely employs its runtime in analyzing the difficulties of human development in the absence of human role models. Sara, apparently the only human in existence, grows up with an incomplete sense of identity and has to scavenge in toxic ruins to gather records that will teach her what it's like to cook or dance. The fugitive robots definitely love her, even if they give no hint of knowing that concept, but there's only so much they can teach her. It is an established rule of this world that robots are designed to serve humans, which means that, as creative and resourceful as they are, none of them can give her a true example of how to make autonomous choices. To become an adult, she needs to step into the unknown. When she hears a call for help that appears to come from another lost human, she starts putting together the clues to what happened to the world and why humanity disappeared from it.

Plotwise, Eden plays with the genre expectations that veteran science fiction fans can bring to the table. Yes, robots control this world, but they never took over. Humans are nowhere in sight, but they're not gone. The world was seriously damaged in the past, but the current state of affairs is not a punishment. What is at stake in Eden is not a fight for world domination, as might be the case if this were The Matrix or Terminator, but something more abstract and personal: the blurry line where an obsessive wish for protection becomes an urge for self-destruction.

Even while sticking to the content restrictions of a general audience rating, Eden doesn't shy away from portraying the regrettable facts of humanity and drawing attention to the desperate extremes we're capable of when love and death and joy and disillusion and hope and rage get entangled in that peculiar way that cannot be explained to a robot, but every child watching will understand. Eden trusts its viewers to ponder questions that even adults struggle with, because they are questions that stay with us even after we believe we've solved them. Stories should not be afraid of inviting children to devise a justification for our place in the universe. In these troubled times, it's very much up for debate. Eden makes the case that the answer children give to that question will literally open the future. It may sound like too heavy an undertaking for just under two hours of television, but it is presented with great skill, letting the viewers catch the emotional implications of the story without spoonfeeding them its meaning. For a show aimed at a demographic barely able to spell "existentialism," it's a worthy achievement.

Bonuses: +1 for Kevin Penkin's music, +1 for making its target audience reflect on the tough questions of life.