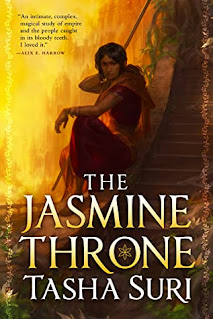 Last time I reviewed a Tasha Suri book - the outstanding Realm of Ash, second in the Books of Ambha - I wrapped it up by saying I was very excited for more Books of Ambha. Awesome women, at the intersection of cultures, finding love and self-actualisation in ways that overcome the misogyny in their elite positions, while still exploring the ways that women hold and wield power in South Asian-inspired fantasy societies! Well, I did not get my wish for more Books of Ambha (that series is now listed as complete after its two excellent novels, seriously, read those books), but luckily Tasha Suri has me covered with all the above in The Jasmine Throne, kicking off The Burning Kingdoms series. All the above, plus it's sapphic now. We're off to a promising start indeed.

Like its predecessor series, The Jasmine Throne has the politics and cultural oppressiveness of empire at its heart. In this case, it's the empire of Parijatdvipa, ruled by an emperor who has brought back increasingly repressive and horrific religoius traditions in order to maintain his rule - culminating in the decision to burn his sister and her two handmaids alive for going against his rule. When his sister, Malini, refuses to go meekly to her death, he instead imprisons her in a ruined temple (the Hirana) in the city of Hiranapratha, capital of Ahiranya, keeping her in seclusion with only an abusive minder to watch over her. The Hirana, of course, has a long history of its own, and its downfall is inextricably linked to Parijatdvipa's rise. Once a place where children were raised and baptised in its holy (and dangerous) waters and given magical powers from its blessing, the Hirana has been empty for almost a generation, its last group of devouts and children burned to death under mysterious circumstances, and Ahiranya as a whole is suffering from a "rot" which transforms its people into living trees. However, not everyone with a connection to the old temple is gone, and one of them still climbs to its top on a regular basis: the maidservant Priya, who is one of a group of expendable servants making the Hirana liveable for Malini while keeping entirely out of sight.

This being an epic fantasy, of course, Priya and Malini are fated to meet and have their fates intertwine; this being a sapphic fantasy, they are of course also going to develop some high quality capital-F Feelings while doing so. But The Jasmine Throne is far from done with intertwining fates after just two characters and an evil emperor-brother. No, what brings The Jasmine Throne to life - and makes its opening chapters far more of a whirlwind of different perspectives and scenarios - is that Hiranapratha is full of relationships and movements that link to both Priya and Malini in different ways. Thus, we meet Priya's employer Bhumika, the Ahiranyi wife of the regent who rules the city on the emperor's behalf: a woman who has her own connections to the Hirana and to Priya's past, and who leverages her position and her husband's lack of respect for her abilities into helping the people of the city. We meet Rao, member of the royal family of Alor, who keeps his real name as a closely guarded prophecy and is seeking to release Malini so she can rejoin her other brother (the one that isn't a despotic emperor) and incite a revolution. And then there's Ashok, member of an Ahiranyi revolutionary movement whose aims, methods and past also intersect with the Hirana and Priya in various ways.

The Jasmine Throne requires the reader to follow along as it establishes the players in Parijatdvipa and Ahiranya, but it rewards that patience with immense depth, constantly adding more shared history and context for its characters that complements their present adventures very well. There's a risk, when relationships or bits of information are universally known by the characters but withheld from the audience until it can be unveiled at the juiciest possible moment, that these reveals can feel artificial or cheap. However, The Jasmine Throne largely avoids any such moments, slotting revelations from the past, and the complications they bring, neatly alongside what we already know or suspect about particular characters and events in a way that makes it feel like the past and the present are both unfolding naturally before the reader. It helps a lot that the main narrative is so enjoyable to follow. Priya's magical self-discovery, and Malini's political one, intersect with the other characters and with each other in ways that produce plenty of set pieces and reversals and adventures (and things on fire, this is a book where things that should not be on fire are often on fire) and it's all very enjoyable, in a "relatively high fantasy bodycount and no right answers to the intersecting political problems" sort of way. You know what I mean.

Of course, without Priya and Malini's chemistry, that adventure wouldn't get off the ground, and its here where The Jasmine Throne really excels. Unlike fellow recent sapphic fantasy The Unbroken, The Jasmine Throne doesn't really trade in on the enemies-to-lovers" trope despite making the difference between Malini's goals and Priya's abundantly clear from the start. Malini and Priya are immediately drawn to each other and while each is constantly looking for ways to use the other to their advantage, there's also a core of trust that builds up between the two of them that their inevitably diverging paths, and the sacrifices that each is willing to make to follow them, never really manages to touch While it's no fault of books which keep their enemies-to-lovers more openly at odds, I personally enjoy this set-up immensely, and I found the slow build of feelings and the way Priya and Malini's think about each other to be very satisfying indeed. This being the start of a series, things between the two are left open ended, and there's plenty of time for things to get a lot worse (and, don't get me wrong, there's still plenty of ways in which they are kind of terrible to and for each other), but... in short, I ship it.

And so we reach the "pithy closing paragraph" point of this review. Do I have anything mo to say? Not really. The Jasmine Throne is really good secondary world fantasy, and it's adding to a 2021 shelf that (thanks in no small part to Orbit, the publisher of this, The Unbroken, Son of the Storm and other excellence) is filling up with really good fantasy. You know, ones that centres queer relationships, worlds that aren't "medieval Europe with dragons", raise giant middle fingers to empire and hereditary rulership in all its forms, and not coincidentally offer immensely satisfying, readable, intricate mixtures of political intrigue and character-driven adventure and self-actualisation that pushes all the right trope buttons. What's exciting about The Jasmine Throne is that it's kind of amazing, and yet it doesn't immediately stand out above other fantasy books I've read this year, because oh wow, they were all amazing too. Which is to say, read this book and also read everything else on every "best of 2021 book list" it's on. It's all good.

Bonuses: +1 Intricate political history and character relationships woven into the fabric of the narrative; +1 Just the right flavour of lovers-at-odds

Penalties: -1 Requires a bit of patience with the original set-up and proliferation of point-of-view characters before said intricacy pays off.