A single volume epic fantasy novel about the fate of a world and a particular artifact that could alter it forever, diving deeply into personal questions of identity, power, and mental health. 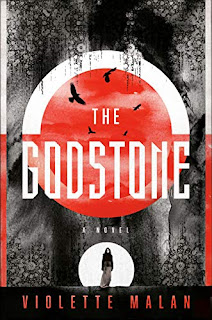 Arlyn  has a problem. Living a quiet life, far away from the center of power. He works in wood, has a pretty good and peaceful life. But this is all upset by a letter from the magical Practitioners of the White Court. His distant cousin Xandra, long since missing, has now been declared dead and lost, and there is his estate, his legacy to deal with. As the closest relative, Arlyn has to travel to see to his cousins’ legacy.. Arlyn can see right away its a power play by someone in the White Court to get access to Xandra’s magical heritage and artifacts, a very dangerous heritage and legacy at that. But there is an additional problem.

For, you see, Arlyn is really Xandra who long ago made an artifact that could alter, or even destroy the fabric of the world. And worse, Arlyn is not sure just how he did it or what to precisely do if the titular Godstone should once again come to light and to the hand of a practitioner seeking power, and unaware of the danger that it represents.

The idea of a character who one could shake the world, but now has retired to an obscure corner of it and is roused when their quiet life is shaken by an external agitator is not unknown in fantasy. However, in our literary landscape, such stories are uncommon, given the genre’s general preference for protagonists on an earlier spectrum of their careers. Origin stories, even in fantasy novels, rule the day.  Characters who have established themselves are a less common mode of fantasy novel, because backstory and backfill are not as easily or smoothly done than showing off the power and ability of a character coming into their own, and the latter is a story that our society values more. As I have gotten older, though, I’ve been drawn to protagonists who have had a history to them. Veteran Characters, for lack of a better term.

In terms of this idea of veteran character drawn back into the flow of matters, Corvis Rebaine from Ari Marmell's The Conqueror's Legacy comes to mind. A Crown for Cold Silver by Alex Marshall also comes to mind. The interesting thing those two touchstones have with Arlyn in The Godstone is in the not entirely benevolent nature of the protagonists. The quiet “Retirement”  of those characters is a good thing, for they shook the world, and not in benevolent ways. Violette Malan’s own Mirror Prince also features a character who is (against their will) living a very quiet life on our own Earth, but when awakened to his true ability, has enormous power, but doesn’t even know the full extent of that power, or remembers what they did with it.

So, too, Arlyn, or Xandra, depending on how you look at it. We slowly get a sense as the novel progresses as to how and why and what the Godstone was and what it means, in a number of senses to Arlyn/Xandra. Arlyn may now be a worker of wood, living far from the center of power, but the aforementioned  inciting incident of being named as executor of the will of his “cousin” Xandra draws him back into his old life, even if a lot of it he simply doesn’t have memory or access to same. The novel has a mystery element, but it is a mystery where we know that Xandra did things, but not precisely what he did, why he did them, or the consequences of meddling with those forces. All the while, we get to know Arlyn as a character, and the Xandra that he was as well. These are very distinct personalities and characters, and seeing them against each other is a masterpiece of characterization.

But the novel is also about expectations of younger characters as well, that is to say, Fenra Lowens.  At first, she seems little more than a plot device to take Arlyn to the center of power, and is framed very carefully and deliberately as someone of only minor talent. But Fenra”s story is nuanced and complex and is NOT the classic story of someone who “didn’t know” they had a secret power and destiny within them all along. That’s a well worn path, and Malan knows it, and eschews it for a less used and more interesting one. The main “institutions”' in the novel, The Red Court and The White Court are not the focus of this novel per se, but the tension between them, and the problems of the world they have created filter down into Fenra’s story. This novel could also be seen as the consequences of institutional blindness and ossification. Fenra’s abilities are not hidden and waiting to be revealed so much as being belittled and minimized.

The novel also explores the legacy of Xandra’s former actions, not only in creating an artifact capable of changing the world, but the personal as well, in the personage of Elvanyn.It emerges that long ago, Xandra had done Elvanyn very very wrong and both are surprised to find themselves in each other’s company. Elvanyn’s story and how it develops is a rich strain of character in a book where Xandra and Fenra’s stories dominate. There is a slight bit of genre mixing in his personal story as well, when and how he appears in the narrative, which was a not entirely unexpected treat given Malan’s previous novels and willingness to blur some subgenre and genre boundaries.

Even in the end, the antagonist is interestingly shaded and nuanced as well. Their motivations and actions and movements seem really straightforward at first, a classic antagonist for this trio of protagonists (and with a few key passages as exception, our viewpoint characters), as matters progress, events can and do cause us to see how that antagonist changes, themselves, and things are far from what they appear. I look forward to a re-read of this novel to really see the shadings of work here across all the characters.

For all of this, the fate of a world, someone powered to shape it, those whose lives intersect with his in that process and the dangers revealed, is not uncommon in epic fantasy. What I found rather different, interesting, intriguing, and perhaps a bit discomforting is the novel’s interest, to the point of theme, in mental illness, specifically depression. In this secondary world called lowness, Xandra definitely suffers from it, and how it influences and overshadows the plot might be a bit of a spoiler, but I can speak to here how Malan talks about it as a theme, and a way to look at Xandra’s character in a way that I had not expected. Given that Fenra is a practitioner of healing, it is not surprising that wounds of the mind come in for exploration and explication as well as more physical ailments. No surprise given her experience and nuance, however, there are no easy answers, no wand waving, to deal with deep seated issues of lowness and it affects Xandra. It was a surprise to see it in the novel, and again, it made me as a reader personally a bit uncomfortable, but it is done carefully and with care.

And let me put in a world about the worldbuilding here, since I’ve focused so much on the characters in talking about the story. Interesting magic systems, the nature of the world, how the world has changed and developed and more come in for exploration in this novel. The most recent books that this world kind of feels like is Howard Andrew Jones Ring-Sworn series (starting with For the Killing of Kings). Or, to an extent, Elizabeth Bear’s Celadon Highway novels. There is a partitioning of worlds within the world here as in those novels, here called Modes. The nature of Modes is strongly tied to some of the plot twists (which Malan is awfully good at) as well as revelations about what is going on, and why. There are some very interesting ideas at work here about how magic intersects with the fabric of the world, how those systems can work with and against each other, and how practitioners deal with each other, and with the rest of the world.

The novel is advertised as first in a series, and there are a couple of ways a sequel might take the novel, but this story here is extremely self contained and you can read this without fears of being sucked into a story which is not complete. I am very intrigued by how things stand at the end of this novel, and do want to know more about some of the questions raised in the story and would like to see the answers and issues raised in worldbuilding to get more exploration. So, if this is the first of a series, I am looking forward to those, and if this is truly a standalone, I am very well satisfied with the complete arc told in this story. Come for the characters and themes, stay for the plotting and worldbuilding, or the reverse. I loved it.

Bonuses : +1 for an interesting set of three protagonists with a lot of character development and exploration

+1 for a good exploration of themes of legacy, depression, and atonement for past actions.

Penalties: -1 A little lack of clarity of whether this is a series or a standalone leads to a bit of muddle