Microreview [book]: She Who Became the Sun by Shelley Parker-Chan

A slow, complex reimagining of the founding of the Ming dynasty, with a nameless daughter taking on an identity and destiny that takes her far beyond her origin. 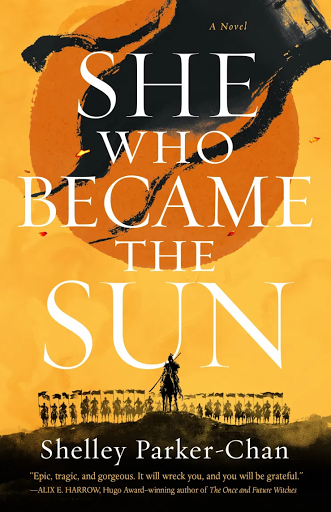 She Who Became the Sun is a historical retelling about a fascinating moment in history: the fall of the Yuan dynasty and the founding of the Ming dynasty in China, and the corresponding rise of Zhu Chongba, a peasant boy from an impoverished family wiped out by famine, to becoming the dynasty's first Emperor. Except, in this reimagining, Zhu Chongba was not born with that identity. Instead, when the real Zhu Chongba dies of famine, it's his nameless sister who takes on his name and everything about his identity, including the prophecy that Zhu Chongba - whoever takes up that mantle - is destined for greatness. By taking on her brother's identity and finding her way into a nearby monastery for the next decade, Zhu survives, but eventually the conflict catches up with her and she ends up joining the Red Turban rebel forces, securing her place in the army through a smart initial victory and rising through the ranks.

Zhu's rise to power - and the way it ties in with a fantasy world that takes prophecies and mandates very seriously - would be a great adventure even without the complexities of her gender - but with it, the story becomes much more compelling. While Zhu lives in a time where men and masculinities are highly constrained, it is also a patriarchal structure where women have almost no agency or power except through making a lucky enough marriage. Zhu is convinced that she can only achieve the destiny attached to her name if she acts entirely in accordance with the way the "real" Zhu Chongba would have done - which means trying to push away any manifestation of her own female identity, and refuse any empathy with the women around them despite understanding their challenges far better than other men can. And yet, as readers, we can see that much of Zhu's brilliance comes from her ability to think beyond the constraints of martial masculinity that most of her comrades are embroiled in, and when she begins to build a relationship with Ma Xiuying (daughter of a dead General and betrothed of another), it's all we can do not to shout at her to stop being dense and go for it. But Zhu's gender journey is nowhere near as basic as "woman in patriarchy doesn't want to be oppressed", and her kindling a connection with Ma is not, in the end, about a shared gender - although it is based on a promise of being able to break with convention. Zhu never stops referring to herself with she/her pronouns (hence why I'm using them here - though the book switches depending on the point of view character) but her path to establishing her own identity involves embracing her "otherness" even as she evolves past the need to perform the best version of her brother that she can.

She Who Became the Sun is one of this year's much-feted golden-covered sapphic fantasies, but compared to The Jasmine Throne and The Unbroken, the chemistry between Ma and Zhu plays less of an active role in the narrative. It's still very much there, particularly in the book's heartbreaking climax, but it's nevertheless a quieter relationship than The Unbroken's Touraine and Luca or The Jasmine Throne's Priya and Malini. Instead, the more tumultous and tragic journey is given to the book's other great relationship: that between Ouyang, a eunuch general in the service of the Mongolian Prince of Henan, and the Prince's son Esen. Ouyang was brought into the service of the Mongols after they massacred his family and mutilated him, so one can imagine he's not particularly happy with the situation. But as a man dealing with plenty of Gender Bullshit of his own, Ouyang is desperate to prove himself as a martial leader, and his actions immediately put him at odds with Zhu as the latter begins to rise. Ouyang's complex, heated relationship with Esen, and Esen's own struggles with both Ouyang and with his adoptive brother Wang, make the politics of the Mongol side just as intriguing as that of the Red Turbans, and Ouyang's own difficult, conflicted role makes it hard not to sympathise even as we hate his actions in opposition to Zhu. Both Ouyang and Zhu end with very morally challenging resolutions in this book (the first of a duology), yet I find myself rooting for and sympathising with both of them, and hoping for at least a shred of mutual understanding to be possible in the concluding part.

She Who Became the Sun is, in short, an impressive book. On a personal level, it didn't work as well for me as it seems to have done for other reviewers - perhaps because it's so slow, I found myself appreciating it in a distant way rather than being as emotionally drawn in to Zhu's journey as I had hoped. The relatively low magic also took some adjustment after spending a lot of time in more fantastic worlds more recently: as noted, the Mandate of Heaven has a very physical manifestation in this world, and there are ghosts and other supernatural elements, but the war being fought is very much one of the historical time. Those are not criticisms of the book itself, though, and as historical fantasy that stays (I think!) relatively true to the historical record, She Who Became the Sun is a brilliant example of how the genre can turn those events on their head and bring readers a narrative that is both instructive of the period while imagining complexity and challenge in places that the historical record inevitably flattens (or overlooks altogether).