Paying a visit to Lovecraft Country 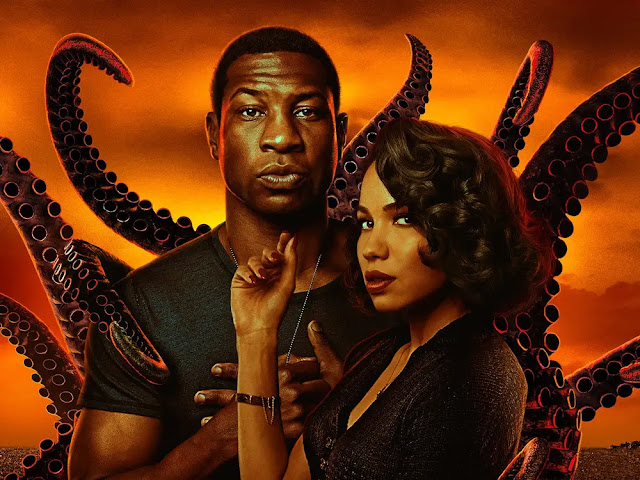 SFF television is quickly becoming more active in discussions around the politics of race.

A lot has been made out of the fact that a significant portion of the audience of HBO's new Watchmen had not heard a word about the single worst act of racial violence in American history until they saw the first minutes of the first episode. A gripping reminder, perhaps, of the indifference that the contemporary America feels about the more shady bits of its backstory.

Turns out that I was actually better informed than many of my fellow viewers because I had some cursory knowledge about what went down in Tulsa in 1921 – thanks not to my keen grasp of history but to another piece of SFF: the novel Lovecraft Country by Matt Ruff. The Greenwood massacre is something of a formative experience for important characters in both the newest interpretation Watchmen and Lovecraft Country, even though in the latter it is a more of a living memory for them as the story is set in 1950s.

I read the book a couple of years ago for Nerds of a feather, flock together and have since been waiting for the TV adaptation to materialize. Now that the first episode has been out for a week, I guess it's a good time to say a word or two about it. I'm obviously writing this without seeing eight tenths of the first season, so let's hope that the upcoming episodes won't render anything I say completely silly. Time will tell, for example, if we'll see the Tulsa events on screen at some point.

For television, Lovecraft Country was developed by Misha Green with people like Jordan Peele and J.J. Abrams as executive producers. Ruff's novel-looking collection of interconnected tales was initially a proposal for a TV series, so maybe the process should be called reverse engineering rather than adaptation. Whatever took place, it carefully preserved very much of the source material, at least judging by the first two episodes. Not counting one gender-swap and surname changes, every character seems like they are lifted straight from the book.

The story starts with the protagonist Atticus Freeman returning home to Chicago through states that are unfriendly for black people such as he, and running into vehicle trouble on the road. Now we meet him on a bus as opposed to his own car in the novel, but either way, getting where they are supposed to go is way easier for whites when the car breaks down.

The problem of traveling in Jim Crow America and staying safe is a central to the plot in many ways. Atticus's family is in the business of publishing a guidebook called The Safe Negro Travel Guide which lists the establishments in which black customers can expect to be welcome and stay alive. Even though it sounds like one, it is not a dark joke. Books like that really existed, and having Atticus's uncle George compile them in the story provides an economic solution for drawing the extended family in sticky situations and adventures.

So, the show is called Lovecraft Country. George and Atticus are huge fans of pulp literature and science fiction, including H.P. Lovecraft, and they get into a discussion about his works right in the first episode. There's remarkably little love for Lovecraft to go around these days, compared to just ten years ago. Even though his problematic batshit insane racist views were discussed here and there, Lovecraft was one of the absolute greats of fantastic horror.

For decades, nobody questioned the fact that a World Fantasy Award trophy that was a bust of the author who had written, for example, a poem titled "On the Creation of Niggers” describing a creature that was half-human and half-beast. When the bulby-eyed Lovecraft statue was finally retired in 2015, his most ardent admirers were so unhappy that they even returned the trophies they had previously won. As much Lovecraftiana is published as before, but the most memorable new works explicitly take aim at the racial attitudes of Lovecraft and his works. Victor LaValle's "Ballad of Black Tom" rewrote the "The Horror at Red Hook" from the viewpoint of a black protagonist, and other such works are making it hard to even think about Lovecraft without considering his politics.

In Lovecraft Country, all the Lovecraftian monstrosities are there to make a very specific political point. Indeed, Shoggoths are roaming the night and there are things with way too many eyes and tentacles (and consonants in their names), but evil-wise they are nothing compared to the darkness of Jim Crow. It's a good premise, even though it reduces the Lovecraftian to a gallery of slimy monsters, missing all the bleak lonely horror that I would actually consider Lovecraft's claim to fame. Beings from alien dimensions and the fact that there used to be towns where non-whites are killed if they don't leave before the sun sets are both terrifying.

One could argue that all the Lovecraftian elements are more or less window dressing and could be replaced with other horror lore just as easily. What is borrowed from Lovecraft are some names of horrific creatures, obsession about ancient magic books and assorted plot elements. What cemented his reputation and got him canonized is, I think, the cosmic horror and the feeling of being alone and in constant danger in a cold, brutal universe.

This is a feeling you don't get to experience with Lovecraft Country. Here, good triumphs, family takes care of each other and the atmosphere is cozy. That's probably as anti-Lovecraftian as it gets.

The novel is a happy book about awful stuff in which nobody is really going to get hurt. In the last pages, we leave the black cast laughing together when they have again defied all odds and made it out of their latest adventure in one piece. It's not yet certain that the show will be all like that. Actually, the second episode which just landed might suggest that the main characters can get hurt more seriously here, but the future episodes will tell what kind of Lovecraft Country we are going to be able to visit this time.

I'm sure that somewhere there are Lovecraft nerds itching to remark that the story isn't entirely accurate in all bibliographic details, and they're right. Lovecraft's vile poem mentioned earlier was never published and it had not yet been even discovered at the time when Atticus, his father and uncle George are discussing it in Lovecraft Country. Personally, I don't particularly care as it makes a better story this way, but it's a bit fast and loose here and there. In all honesty, I don't think that actual black science fiction fans in the 1950s would be as understanding as Atticus and George are about the undertones of Lovecraft's work. At times they feel more like stand-ins for contemporary SFF fans, but that's how it is. Lovecraft Country is entertainment and not a dissertation.