Welcome to another edition of the New Books Spotlight, where each month or so we curate a selection of 6 new and forthcoming books we find notable, interesting, and intriguing. It gives us the opportunity to shine a brief spotlight on some stuff we're itching to get our hands on.

In the desolate flats of west Texas, two brothers purchase an old motel with the intent of renovating it and making a fortune off the population surge brought about by the fracking boom. Though each man is lured there by the promise of wealth, they are also fleeing something: a history of trauma, of failure, of family abuse, and shame.

But the motel proves to have a history of its own. Once the business of a distant relative of theirs, Corbin Pugh, the brothers begin to discover signs that it might have been more than just a motel back during the wildcatter days of the last oil boom.

As they live and labor in its dusty halls, fighting the crawling feeling that they are not alone here, they begin to wonder: what kind of a man was Corbin Pugh? What happened in the rooms he owned, so many decades ago? And is the motel changing them, warping them to become more ruthlessly ambitious and brutal—or is this what men must become in order to survive on the edge of civilization?

Why We Want It: Genre readers today are more familiar these days with Bennett's Divine Cities trilogy and the Foundryside novels, but they won't want to miss the realistically bleak In the Shadows of Men. Check out our review.

Truth is a human right.

It’s fall 2007. A well-timed leak has revealed that the US government might have engaged in first contact. Cora Sabino is doing everything she can to avoid the whole mess, since the force driving the controversy is her whistleblower father. Even though Cora hasn’t spoken to him in years, his celebrity has caught the attention of the press, the Internet, the paparazzi, and the government—and with him in hiding, that attention is on her. She neither knows nor cares whether her father’s leaks are a hoax, and wants nothing to do with him—until she learns just how deeply entrenched her family is in the cover-up, and that an extraterrestrial presence has been on Earth for decades.

Realizing the extent to which both she and the public have been lied to, she sets out to gather as much information as she can, and finds that the best way for her to uncover the truth is not as a whistleblower, but as an intermediary. The alien presence has been completely uncommunicative until she convinces one of them that she can act as their interpreter, becoming the first and only human vessel of communication. Their otherworldly connection will change everything she thought she knew about being human—and could unleash a force more sinister than she ever imagined.

Why We Want It: I'm as suspectible to pre-publication hype as anyone else, but Axiom's End was just about as far from my personal radar as possible. I didn't connect the Hugo Award finalist Lindsay Ellis for Related Work with one of the buzzier debuts of the year, but the more I read and hear about Axiom's End the more I'm here for it.

Terminally ill salvage pilot Ash Jackson lost everything in the war with the alien Vai, but she'll be damned if she loses her future. Her plan: to buy, beg, or lie her way out of corporate indenture and find a cure. When her crew salvages a genocidal weapon from a ravaged starship above a dead colony, Ash uncovers a conspiracy of corporate intrigue and betrayal that threatens to turn her into a living weapon.

Why We Want It: Along with Axiom's End, The Architects of Memory is one of the more significant science fiction debuts of the year. I'm fairly certain I met Karen Osborne a number of years ago at a Fourth Street Fantasy Convention, which has nothing to do with the novel itself, but I remember enjoying speaking with her then and I'm very happy to see Osborne's debut (I'm also 100 pages into the novel as I write this and it is excellent so far) 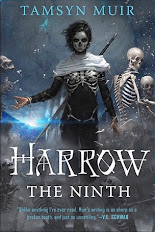 She answered the Emperor's call.

She arrived with her arts, her wits, and her only friend.

In victory, her world has turned to ash.

After rocking the cosmos with her deathly debut, Tamsyn Muir continues the story of the penumbral Ninth House in Harrow the Ninth, a mind-twisting puzzle box of mystery, murder, magic, and mayhem. Nothing is as it seems in the halls of the Emperor, and the fate of the galaxy rests on one woman's shoulders.

Harrowhark Nonagesimus, last necromancer of the Ninth House, has been drafted by her Emperor to fight an unwinnable war. Side-by-side with a detested rival, Harrow must perfect her skills and become an angel of undeath — but her health is failing, her sword makes her nauseous, and even her mind is threatening to betray her.

Sealed in the gothic gloom of the Emperor's Mithraeum with three unfriendly teachers, hunted by the mad ghost of a murdered planet, Harrow must confront two unwelcome questions: is somebody trying to kill her? And if they succeeded, would the universe be better off?

Why We Want It: From where I stand (or sit, as the case may be), Harrow the Ninth may be the most anticipated sequel of the year after Gideon the Ninth blew the doors off the genre last year. I've read it. Adri's read it. Whatever you are expecting Harrow the Ninth to be, it is not that. Harrow is perhaps the most unexpected sequel I've read, but it is as spectacular as you might hope - but it is a baffling, wonderful, everything-bending read. 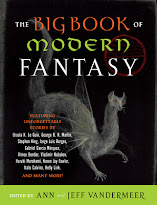 From Ann and Jeff VanderMeer comes The Big Book of Modern Fantasy: a true horde of tales sure to delight fans, scholars — even the greediest of dragons. A VINTAGE ORIGINAL.

Step through a shimmering portal . . . a worn wardrobe door . . . a schism in sky . . . into a bold new age of fantasy. When worlds beyond worlds became a genre unto itself. From the swinging sixties to the strange, strange seventies, the over-the-top eighties to the gnarly nineties–and beyond, into the twenty-first century–the VanderMeers have found the stories and the writers from around the world that reinvented and revitalized the fantasy genre after World War II. The stories in this collection represent twenty-two different countries, including Russia, Argentina, Nigeria, Columbia, Pakistan, Turkey, Finland, Sweden, China, the Philippines, and the Czech Republic. Five have never before been translated into English.

From Jorge Luis Borges to Ursula K. Le Guin, Michael Moorcock to Angela Carter, Terry Pratchett to Stephen King, the full range and glory of the fantastic are on display in these ninety-one stories in which dragons soar, giants stomp, and human children should still think twice about venturing alone into the dark forest.

Completing Ann and Jeff VanderMeer’s definitive The Big Book of Classic Fantasy, this companion volume to takes the genre into the twenty-first century with ninety-one astonishing, mind-bending stories.

Why We Want It: It's the Big Book of Modern Fantasy. No, really, this is a massive diverse tome with stories stretching from the end of World War II to 2010. Knowing the editors VanderMeer, this is an extraordinary anthology and it won't hit the same old "best of" stories we've read in a dozen other anthologies. They read with a breadth and a depth that is incredible.

Carrie Vaughn follows up The Ghosts of Sherwood with the charming, fast-paced The Heirs of Locksley, continuing the story of Robin Hood's children.

"We will hold an archery contest. A simple affair, all in fun, on the tournament grounds. Tomorrow. We will see you there."

The latest civil war in England has come and gone, King John is dead, and the nobility of England gathers to see the coronation of his son, thirteen year old King Henry III.

The new king is at the center of political rivalries and power struggles, but John of Locksley—son of the legendary Robin Hood and Lady Marian—only sees a lonely boy in need of friends. John and his sisters succeed in befriending Henry, while also inadvertently uncovering a political plot, saving a man's life, and carrying out daring escapes.

All in a day's work for the Locksley children...

Why We Want It: I read The Ghosts of Sherwood earlier this year and thought it was absolutely delightful. Vaughn's take on the Robin Hood mythos set years later and centered on the children of Robin and Marion is everything I didn't know that I wanted - and The Heirs of Locksley brings me more.

POSTED BY:  Joe Sherry - Co-editor of Nerds of a Feather, 4x Hugo Award Finalist for Best Fanzine. Minnesotan. He / Him.