Welcome to another edition of the New Books Spotlight, where each month or so we curate a selection of 6 new and forthcoming books we find notable, interesting, and intriguing. It gives us the opportunity to shine a brief spotlight on some stuff we're itching to get our hands on.

A fragile peace gives way to conspiracy, betrayal, and rebellion in this sequel to the New York Times bestselling A Little Hatred from epic fantasy master Joe Abercrombie.

Peace is just another kind of battlefield . . .

Savine dan Glokta, once Adua’s most powerful investor, finds her judgement, fortune and reputation in tatters. But she still has all her ambitions, and no scruple will be permitted to stand in her way.

For heroes like Leo dan Brock and Stour Nightfall, only happy with swords drawn, peace is an ordeal to end as soon as possible. But grievances must be nursed, power seized, and allies gathered first, while Rikke must master the power of the Long Eye . . . before it kills her.

Unrest worms into every layer of society. The Breakers still lurk in the shadows, plotting to free the common man from his shackles, while noblemen bicker for their own advantage. Orso struggles to find a safe path through the maze of knives that is politics, only for his enemies, and his debts, to multiply.

The old ways are swept aside, and the old leaders with them, but those who would seize the reins of power will find no alliance, no friendship, and no peace lasts forever.

Why We Want It: When I spotlighted Abercrombie's previous novel A Little Hatred, I noted "A Little Hatred may be an understatement. I expect a lot of hatred and a lot of violence and told in a way that only Abercrombie can." I was right. Once again I expect the title to be an understatement. There likely will be trouble with peace, but there will also be a lot of hatred and violence. Abercrombie is as good as he ever was. I can't wait.

Piranesi lives in the House.
Perhaps he always has.

In his notebooks, day after day, he makes a clear and careful record of its wonders: the labyrinth of halls, the thousands upon thousands of statues, the tides that thunder up staircases, the clouds that move in slow procession through the upper halls.

On Tuesdays and Fridays Piranesi sees his friend, the Other. At other times he brings tributes of food and waterlilies to the Dead. But mostly, he is alone.

Messages begin to appear, scratched out in chalk on the pavements. There is someone new in the House. But who are they and what do they want? Are they a friend or do they bring destruction and madness as the Other claims?

Lost texts must be found; secrets must be uncovered. The world that Piranesi thought he knew is becoming strange and dangerous.

The Beauty of the House is immeasurable; its Kindness infinite

Why We Want It: Clarke's previous (and debut) novel, Jonathan Strange and Mr Norell won the Hugo Award for Best Novel and I've been intimidated to read that thousand page foot noted door stopper ever since (I'll read it one day, I promise) - but that makes Piranesi a significant novel this year and something to pay attention to. As an added bonus, Piranesi is under 300 pages.


“The best mingling of history with historical magic that I have ever seen.”—Gene Wolfe

In a snowbound inn high in the Alps, four people meet who will alter fate.

And Sforza, the uncanny duke.

Together they will wage an intrigue-filled campaign against the might of Byzantium to secure the English throne for Richard, Duke of Gloucester—and make him Richard III.

Available for the first time in nearly two decades, with a new introduction by New York Times-bestselling author Scott Lynch, The Dragon Waiting is a masterpiece of blood and magic.

“Had [John M. Ford] taken The Dragon Waiting and written a sequence of five books based in that world, with that power, he would’ve been George R.R. Martin.” —Neil Gaiman

Why We Want It: I wonder how many readers today have heard of John M. Ford. I never would have, except that there were two years I attended Fourth Street Fantasy Convention and Ford was often mentioned. They knew him, personally, and they spoke of Ford and his work reverently and with love. He was only 49 when he passed, which is staggeringly young. Long out of print, Tor will be republishing all of Ford's novels, starting with The Dragon Waiting - his most notable work.

The world is changing. Poison desert eats good farmland. Once-sweet water turns foul. The wind blows sand and sadness across the Empire. To get caught in a storm is death. To live and do nothing is death. There is magic in the world, but good conjure is hard to find.

Djola, righthand man and spymaster of the lord of the Arkhysian Empire, is desperately trying to save his adopted homeland, even in exile.

Awa, a young woman training to be a powerful griot, tests the limits of her knowledge and comes into her own in a world of sorcery, floating cities, kindly beasts, and uncertain men.

Awash in the rhythms of folklore and storytelling and rich with Hairston's characteristic lush prose, Master of Poisons is epic fantasy that will bleed your mind with its turns of phrase and leave you aching for the world it burns into being.

Why We Want It: I've been circling around Hairston's work for a number of years now and even though I should have read Mindscape or Will Do Magic for Small Change years ago, there is no better time to correct my lapse and read Master of Poisons than right now.

When October is informed that Simon Torquill—legally her father, due to Faerie’s archaic marriage traditions—must be invited to her wedding or risk the ceremony throwing the Kingdom in the Mists into political turmoil, she finds herself setting out on a quest she was not yet prepared to undertake for the sake of her future…. and the man who represents her family’s past.

Why We Want It: Readers of the Feather who have paid any attention to what I write about will know of my established love of Seanan McGuire's novels. A Killing Frost isn't the place to start with Seanan McGuire, it is too tied into the previous novels, but longtime fans of her October Daye series will be ready for this. I know I was. Seanan McGuire delivers. 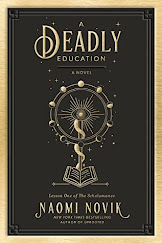 From the New York Times bestselling author of Uprooted and Spinning Silver comes the story of an unwilling dark sorceress who is destined to rewrite the rules of magic.

“The dark school of magic I’ve been waiting for.” Katherine Arden, author of Winternight Trilogy

I decided that Orion Lake needed to die after the second time he saved my life.

Everyone loves Orion Lake. Everyone else, that is. Far as I’m concerned, he can keep his flashy combat magic to himself. I’m not joining his pack of adoring fans.

I don’t need help surviving the Scholomance, even if they do. Forget the hordes of monsters and cursed artifacts, I’m probably the most dangerous thing in the place. Just give me a chance and I’ll level mountains and kill untold millions, make myself the dark queen of the world.

At least, that’s what the world expects me to do. Most of the other students in here would be delighted if Orion killed me like one more evil thing that’s crawled out of the drains. Sometimes I think they want me to turn into the evil witch they assume I am. The school itself certainly does.

But the Scholomance isn’t getting what it wants from me. And neither is Orion Lake. I may not be anyone’s idea of the shining hero, but I’m going to make it out of this place alive, and I’m not going to slaughter thousands to do it, either.

Although I’m giving serious consideration to just one.

With flawless mastery, Naomi Novik creates a heroine for the ages—a character so sharply realized and so richly nuanced that she will live on in hearts and minds for generations to come.

Why We Want It: After making her mark with the nine Temeraire novels, Novik really broke out with Uprooted and Spinning Silver. Though there is always something classist about magic schools, there is also an appeal - and Novik's darker take on the concept is something I want to read. Naomi Novik is a master storyteller who has only gotten better and we can't wait to see what she does with magic schools.