Interview: H.G. Parry, author of A Declaration of the Rights of Magicians 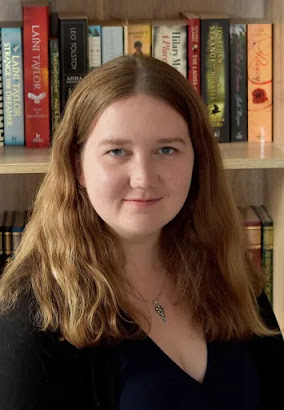 In Western Europe, it is the Age of Enlightenment.  In the Caribbean,  a slave rebellion is brewing. Now, add magic!  Enter H.G. Parry's newest novel,  A Declaration of the Rights of Magicians, published in June from Redhook. In this sprawling historical fantasy, magic is used to keep powerful people in power, and to keep the powerless in chains. But what happens when the status quo goes out the window? With lots of banter and a fast moving plot, Parry forces her characters to ask questions and face situations that will change their world forever.


Something I love about novels like this one, is that a) they entertain me, b) they give me my fantasy fix, and c) they send me down wikipedia rabbit holes because I want to know who all of these people really were and what actually happened. If you like that kind of experience too, you're in luck, as Declaration is the first in an expected duology.

Based in Wellington, New Zealand, Parry grew up reading and loving classics such as Beowulf, The Lord of the Rings, Jane Austen's works, and everything Dickensian. (If fact, if Dickens is your thing, may I recommend Parry's The Unlikely Escape of Uriah Heep? I loved it!)    Her short fiction has also appeared in Intergalactic Medicine Show, Daily Science Fiction, and various anthologies.  You can learn more about her at her website hgparry.com or by following on her twitter, where she is @hg_parry.

Parry was kind enough to answer my questions about the research she did for this new novel, how she created the magic system for the story, respectfully writing a Black enslaved character, doing world building through dialog, and more.

H.G.P.: It was really the other way around—this book grew because I started getting obsessively interested in late eighteenth-century politics, particularly around the French Revolution and the abolition of the British slave trade, and frankly I didn't know what else to do about it! It's a truly fascinating time--a time of radical ideas and radical science and radical politics, of brilliant rhetoric spilling over into revolution and war, of unprecedented social change and upheaval. There's a real feeling of the old order passing away, and being on the brink of an exciting new world. And from a writerly point of view, it's full of people trying to change things for the better, and having to make difficult choices about how to bring about those changes. It's irrestistable.

In terms of research, I started with biographies—you can probably tell of whom when you read the book, because most of them became major characters. I was very fortunate to be travelling through England and Paris at various times when I was writing this book, so I could visit a lot of museums and historical sites for those plot-lines in person. (I came very close to getting accidentally locked in William Wilberforce's house overnight, which would have been peak research. A guard came and found me in the library on closing time.) But most of it was just hours of reading. I was working at a university, so I could raid the library and online resources for anything that interested me—books, contemporary accounts, old newspapers, parliamentary records, all the good stuff. I also read a lot of historical fiction and watched a lot of period dramas, mostly for fun, but also to see what other authors had made of the same material. Since these "other authors" include Charles Dickens, Hilary Mantel, and Susanna Clarke, this was probably more terrifying than helpful, but it was very helpful!

NOAF: History, intrigue, global conversations, and magic? What fun! Talk us through the magic system of your alternate history. What kinds of things can people do with their magic? Is it something you are born with, or do you have to learn how to do it? Can anyone do magic, or only certain people?

H.G.P.: In this version of the world, everyone has the potential to be born with magical gifts—they might be able to conjure fire and water, or manipulate the weather, or summon shadows to do their bidding. They occur naturally, but they can be refined and developed with study and practice. In Europe and Great Britain, these abilities are only allowed to be practiced by the Aristocracy and are policed by the Knights Templar, who lock Commoner magicians into bracelets that limit their magic. As the book starts, certain reformers have begun to argue that magic should be available to everyone, regardless of birth, which is where things start to get heated… 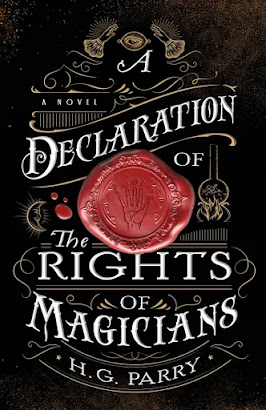 NOAF: I'm a fan of worldbuilding through dialog and witty banter, and I hear A Declaration of the Rights of Magicians has both! Do you have any tips for writing effective dialog? Is banter and fun dialog as fun to write as it is to read?

H.G.P.: The very early version of this book actually started out almost entirely in dialogue, on purpose, like a stage play. It isn't quite that now, but still, there is definitely dialogue! And banter! And parliamentary debates and arguments and long fire-lit discussions about principles! One of my favourite things about the eighteenth century is the utter delight it takes in words and wit and rhetoric, and I really wanted to bring that to the page.

The only tip I can think of is to remember that dialogue is always doing double-duty as character development—the characters need to be revealing themselves not just by what they say, but what words they choose, the pattern of their sentences, the way they choose to direct the conversation. That, and to watch the gap between what characters say and what they mean. Even if characters aren't lying on purpose, they're rarely being completely honest with themselves or with each other, and that's where the tension and the poignancy lies.

Banter: oh, probably far, far more fun to write than to read! If it was up to me the characters would just drink tea and exchange witty barbs and never get any plot done.

NOAF: One of your main characters, Fina, is a slave on a sugar plantation. Writing about slavery can be delicate. What can you tell us about how you developed Fina's character and her worldview?

H.G.P.: It's very, very delicate, and it should be. With anything that draws on difficult history, you want to do justice to the experiences of the people who really lived through it without exploiting those experiences, and that's a difficult balance. Writing Fina is a little bit different to researching and writing a purely historical novel, because you also need to balance how that experience would be shaped and changed by the fantastical elements of the book. A lot of Fina's life and perspective is drawn from those of men and women at the time who provided first-hand accounts of their enslavement, as well as from what we know about women who fought in uprisings and particularly during the Haitian revolution—I was very interested in Mary Prince, the first enslaved woman to publish her memoirs in Britain, though she was born a few decades later than Fina. At the same time, she's the only major character without a direct historical counterpart, partly because her plotline is very dependent on the magic system, partly because I wanted her to be a person who might have been overlooked by our history, but who turns out to be crucial to this one.

In Fina's world, slave-owners force the people they enslave to take an alchemical compound that keeps them powerless to move except to obey orders. Fina becomes immune to the spellbinding as she grows and comes into magic of her own, and if this is discovered she would be killed. Until she can escape, she hides it, which means essentially pretending to be locked in her own body all day, every day, without a single involuntary movement or expression. So she's very driven by her anger and her determination to save the others who were enslaved with her; she's also very used to concealing her feelings and even disassociating from them in order to survive, and she's increasingly growing to understand and take possession of her power.

NOAF: What was your favorite scene in A Declaration of the Rights of Magicians to write? What was the first scene you wrote?

H.G.P.: Honestly, I've loved writing so much of this book, mostly because of the relationships between the central characters. I love writing Wilberforce and Pitt talking about anything at all, I love writing Robespierre and Camille Desmoulins, I love writing Fina and Toussaint L'Ouverture. All the magical politics and parliamentary proceedings were an absolute joy. If I had to choose, though—there's a very intense confrontation between Robespierre and Camille towards the end of the book, and it was one of those glorious scenes that just wrote themselves and barely needed to be touched afterwards.

The very first scene is probably now going to be in Book Two, so I can't spoil it! But it was Pitt and Wilberforce, and it was about the duel Pitt historically fought in 1801, because he was an idiot.

NOAF: This is book one in the Shadow Histories. What's next for these characters? Should readers plan for a trilogy, or something longer?

H.G.P.: Shorter, actually: it's a duology. Without spoilers, this book covers the period around the French Revolution and the Haitian Revolution; the second book revolves around the rise of Bonaparte and the Napoleonic Wars. It also starts to veer from the path of our own history, because magic tends to do that.

NOAF: What are some of your hobbies? What do you like to do to unwind?

H.G.P.: I'm the boring kind of writer who writes one project as an exciting break from writing another and thinks this counts as a hobby, so: writing! Also reading! Aside from that, I watch far too many BBC period dramas, draw, hang out with my rabbit sidekicks, and (pre-lockdown) love travelling to other countries. I've also raised many families on the Sims.