Flyaway is a rare confection with an acquired taste. 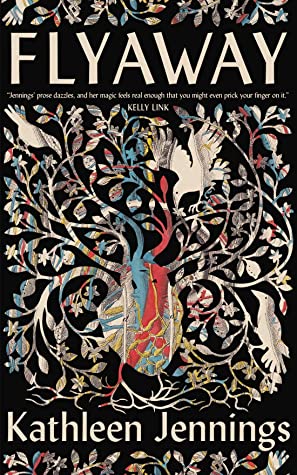 Flyaway is masterfully written but will be a tough sell to some readers. Reading it is like walking through a foggy road, disoriented, eventually seeing beautiful features in fogless area. It builds an atmosphere amidst its mysticism that only expands and elucidates its beauty. And eventually, after much enjoyment of the atmosphere, things start to click to an extent. The fog is still there, because the novel is rooted in ambiguity and relative obscurity, but the disorientation is gone. You get what it’s going for. However, some readers may tire of the beauty along the way and move to a book where things are always clear. Flyaway is the epitome of a well-written book with limited appeal.

The story follows Bettina Scott - a girl dutifully tied to her mother’s wishes - who has a hazy memory regarding the disappearance of her brothers and father. Prompted by a mysterious letter, she goes on a journey with her friends, Gary and Trish, to figure out what is going on

Jenning’s writing carries a lot of the novella. Descriptions sometimes transcend even the most masterful fiction—each sentence is a treasure trove for those who admire wordsmithery. And that lyricism aids the story as it takes risky perspective changes--because interspersed with the journey are mythical tales set in the same region as the main plot. They’re fairytales that circle the periphery of the narrative as you wait for them to come into view and somehow tie in with the main thread.

And things do tie up and make sense by the last quarter of the book. The early goings don't focus on propelling toward answers and are instead  hyper-focused on establishing a tone--a sort of quiet Gothic horror that imbues the story with a feel quite unlike anything else. And events have a murkiness that behooves the story, because it largely deals with the mystery of whether the mystical events being described are real or myth. But unique tones are even better when they’re married with fully formed characters. And despite some development, the characters never become complex. Instead, they take a backseat to tales that favor inventive happenings and construction over inventive characters.

Not only does the story put a fog over the reader, but also a fog over the characters, in which many of them are willfully ignorant to any indications of fantasy. They trudge through their area without wary glances or suspicions of the fantastic, and Jennings doesn’t reveal the truth of whether or not they have anything suspicious to look out for until the end.

While Flyaway has a great mystery that demands the reader work to figure out the secrets along with the characters, it would be nice to have an easier foothold on the story. It throws a lot at you, especially in the earlier chapters, which is sometimes frustrating. A mystery threaded throughout the story is fine, but to not even be sure what that thread is for the initial chunk of the novel is needlessly abstruse.

Flyaway is an expertly crafted novel with pitch perfect prose, surprising twists, and a world that is satisfyingly fleshed out while leaving it with a sense of unsettling mystery permeating the entire novel. Flyaway also demands your patience a little too much and has characters that sometimes feels as wispy as the fog that covers it. It escalates in quality, arriving at a satisfying conclusion. The question is, how much effort are you willing to put into a novella to get there? Your sentiments to that question will decide if it’s right for you.

Bonuses: +1 For accomplishing the rare feat of being unlike any fiction out there.
+1 For a satisfying conclusion.

Negatives: -1 For having underdeveloped characters.